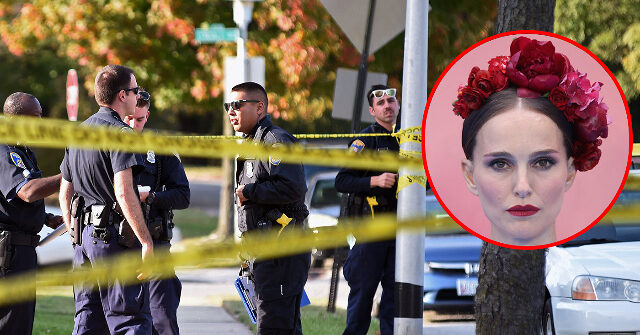 Filming for Apple TV’s Lady in the Lake, starring Natalie Portman, was shut down on Friday after thugs threatened members of the production crew with extortion and violence unless they paid a protection fee.

Producers shut down the filming in an effort to “err on the side of caution” after two men — one of whom reportedly displayed a gun — approached the film crew and demanded money and threatened to shoot someone if their extortion fee of $50,000 was not paid, according to Variety.

NEWS: Statement from Endeavor Content, production company behind ‘Lady in the Lake’, says one of their crew members was threatened with a gun. pic.twitter.com/l5qP74Yui6

The production was being filmed on Park Avenue in the city’s downtown area.

The Baltimore Police Department noted that the filming was temporarily halted, and a new location was being sought.

“Friday afternoon, on the Baltimore set of our production ‘Lady in the Lake,’ prior to the arrival of the cast and crew, per their call time, a driver on our production crew was confronted by two men, one of whom brandished a gun directed at our driver, and then they fled the location,” series producer Endeavor Content said in a statement.

“We are working with the Baltimore Police Department as the investigation is ongoing. The safety and security of our crew, cast, and all who work across our productions is our highest priority, and we are thankful no one was injured. Production will resume with increased security measures going forward. It has been a privilege filming ‘Lady in the Lake’ in Baltimore, working with its vibrant community across many areas,” the statement continued. “Our thanks and appreciation to the City of Baltimore, Mayor Brandon M. Scott, the Baltimore Film Office, Maryland Film Office and the Baltimore Police Department for their incredible support as we continue production in the great City of Baltimore and surrounding communities.”

The series starring Natalie Portman — who is a big supporter of defunding the police — and Moses Ingram is set in 1966 and follows Portman’s character after she leaves her posh Pikesville life in Baltimore and becomes a reporter following up on an unsolved murder while advocating for the city’s minority population. The series is based on a 2019 book by the same name by detective fiction writer Laura Lippman.

Filming began on April and is expected to continue through October. Maryland Gov. Larry Hogan welcomed the production and said that the series “generates a positive impact through job creation and revenue for the local businesses.”

Crime has been soaring in Baltimore this year.

As of July, Baltimore had already suffered more than 200 murders. And Forbes had reported that Baltimore was the fifth most dangerous city in the country last year. Baltimore had 337 murders in all of 2021, which was the seventh consecutive year the city had more than 300 homicides. But with 200 deaths already, it appears the city is on track to match or exceed the 2021 body count.

Questions of the rising violence in the city set Baltimore’s Democrat Mayor Brandon Scott into a tirade in June where he blamed the media for focusing too much on the crime rate and effectively making matters worse.