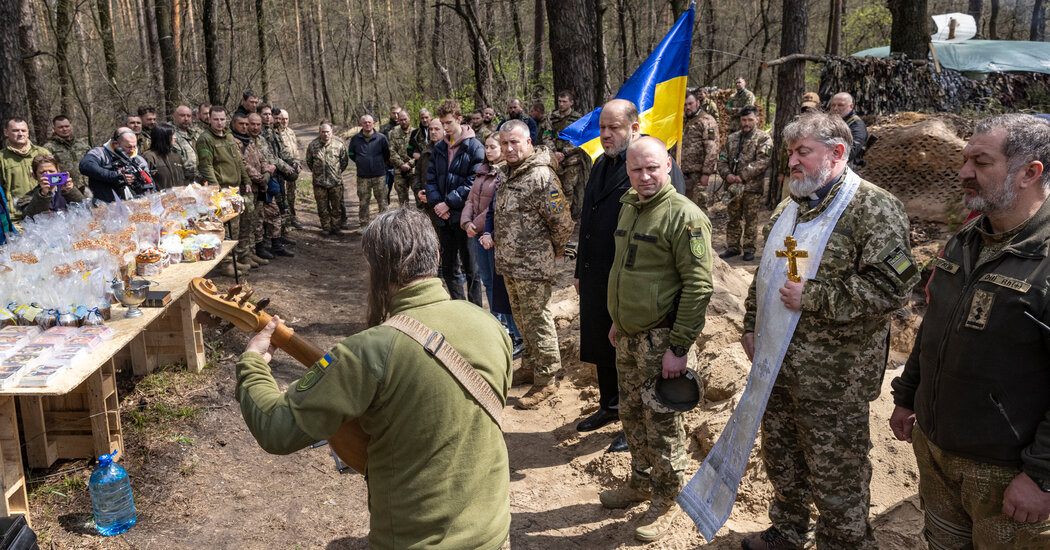 In the basement of a battered school in Kharkiv, a dozen residents have taken shelter. In a neighborhood not far away, life has returned to some sense of normalcy. But they choose to stay.

KHARKIV, Ukraine — The shelling had gone on so long and had been so frequent that even moments of quiet brought their own kind of terror.

The artillery barrages and rocket strikes started when the Russians first invaded in February, 59 days ago, and have not stopped. For those still hiding in the school, every day now brings the same routine: Rise at first light, start the fires, boil water, make tea, cook soup and return to the basement.

They cower in the unbearably cold underground, packed together and listening as shells slam Kharkiv, an eastern Ukrainian city of 1.4 million before the war started, which Russian firepower has tried to pound into submission. There were roughly 300 people sheltering in the school in the early days of the war, yet nearly all have fled. Now there are only 12.

“Here the people left have nowhere to go and nowhere to come back to,” said Larisa Kuznetsova, 55, one of the school’s inhabitants until recently. “And where shall we move? Who needs us elsewhere?”

Trapped in the dangerous ground between Russian and Ukrainian forces, the 12 people still inside the slanted and dusty basement of Kharkiv Municipal Gymnasium No. 172, as the school is officially called, embody what the war has become for those who do not flee: a test of endurance. Even amid the greatest refugee crisis in Europe since World War II, there are people who can’t imagine leaving their home, no matter the cost.

They could escape to a safer section of Kharkiv, only a few miles away, yet they stay. One woman refuses to leave her disabled husband and son. The school secretary stays to protect against looting. The humanitarian workers who bring food to the 12 have taken to calling them “the dwarfs.”

Even with the risk of a direct strike looming over them, they remain, trying to create a semblance of normalcy. They gathered around a table in the school’s underground on Sunday, the Orthodox Easter, for a traditional meal and Easter cakes.

“We served this table so that we could celebrate the holiday, like at home,” said Natalia Afanasenko, 44, the group’s de facto cook.

No. 172’s conversion into a bomb shelter began almost as soon as the war started on Feb. 24. Kharkiv, only 30 miles from the Russian border and Ukraine’s second largest city, was attacked immediately. Ms. Kuznetsova, a short, quick-talking neighborhood shopkeeper, and her son, Dmitry, 23, stayed in their apartment for the first five days.

“There was shelling then, but unobtrusively,” she said. “The shops were open. We would wait in line for two hours and buy a lot of canned food.”

Then one day, as the mother and son ate lunch, the power went out. Ms. Kuznetsova decided to take a quick half-hour nap. She awoke to three shells slamming into her building, known in the neighborhood as Building 40, shaking its foundation, shattering windows and sending her small family crawling to their bathroom, then to the basement.

A few days later, another strike lit Building 40 on fire.

“Everybody came out wearing whatever they were in, and the neighbor was coming my way, saying, ‘What the hell are you doing here? Hurry up to the school,’” recounted Ms. Kuznetsova.

No. 172 is in the neighborhood of Saltivka, a populated residential area in Kharkiv’s northeastern reaches. It has been shelled incessantly by seemingly every type of artillery in the Russian inventory.

The Soviet-style apartment blocks and small shops were built in the late 1960s and ‘70s as Kharkiv expanded after the city’s destruction during World War II. Now Ukrainian howitzers and mortars are positioned nearby, with the apartment towers acting as a shield from incoming Russian fire, locking residents in the middle of an unending duel.

The school, constructed in 1995, is what counts as a safe haven for the neighborhood, partly because its basement is below ground, unlike some in the surrounding apartment buildings.

Ms. Kuznetsova and Dmitry arrived there on March 3, when the original hundreds had dwindled to about 70 people. The basement was damp and putrid. The basics, like food and hygiene material, were scavenged from vacated apartments until humanitarian workers started arriving.

In charge of this bedraggled colony is Natalia Skvortsova, 48, the school secretary. She and her son, Yevgeny Kryvoruchko, 18, are staying for two reasons. She wants to protect against looting and prevent school records and graduation certificates from being destroyed. Quietly, she’s afraid that Yevgeny, now a university student who spends long hours in the half darkness mastering Rubik’s cubes (his fastest time is nine seconds), might get drafted.

“This is how it is,” she said, matter-of-factly.

Before the Russian invasion started, No. 172 was a pleasant white-walled educational center with 1,000 students. It had new projectors, a 25-meter pool and lovely large windows.

But after at least four rounds of artillery hit the campus, killing one man, most windows are shattered, some classroom doors are torn in half, plaster has sheared off walls and the pool’s water is a murky gray. A school museum exhibit honoring Soviet soldiers who fought in World War II has been picked apart so a German helmet from the conflict could be used for protection in the basement.

“It’s terrifying living here,” Yevgeny said. “Yes, I want to leave. But my family is here, how could I?”

As February turned to March, and March to April, the exodus from No. 172 slowly gathered pace.

“Whoever could leave, left,” said Valeriy Gretskykh, 67, one of the final 12.

Today, Kharkiv is still under relentless bombardment, yet only a few miles away from Saltivka life has returned, somewhat. Some shops are open, traffic lights are on and city workers take out the trash at regular intervals. Saltivka remains the hardest hit neighborhood, and with some modicum of normalcy so close, the resistance to evacuate can easily be seen as baffling.

The school residents haven’t showered in months, resorting to baby wipes and bottled water. Plumbing is nonexistent. Power comes from a small generator that runs a few hours every couple days and beds are constructed from school desks and gym mats. For entertainment, they watch old VHS tapes, including school graduations and the documentary “Joseph Stalin: The Last Years, the Last Days.”

“We don’t watch heavy films about war,” said Olga Altukhova, 66, a retired saleswoman whose birthday on April 17 was marked by a bouquet of tulips.

Ms. Altukhova has refused to evacuate because her disabled husband and mentally disabled son are still inside nearby Building 40 and physically can’t leave. Most every hour, she leaves the basement and talks to her husband as he leans out the window from the sixth floor.

The fear of leaving is also fueled by the unknown. The 12 have heard worrying stories about those who have fled.

“I was speaking to a friend who moved to another part of Kharkiv on the phone yesterday,” said Ms. Kuznetsova. “She says, ‘We are eating plain noodles now, nothing is left and the volunteers won’t bring anything after we call them.’”

Indeed, No. 172’s location — practically on the front line — has meant frequent visits from humanitarian aid organizations and nonprofits.

“We are fed amazingly,” Ms. Kuznetsova added. “A lot of people who stay here are eating things now that they weren’t able to eat during the peaceful life.”

No. 172 has so much donated bread that much of it goes bad. So every day one resident breaks a loaf and feeds a gang of pigeons, who take off briefly when artillery comes close, before returning to their meal.

The residents also help take care of people in the neighborhood, acting as a distribution point for those who won’t leave their apartments. People take food, toiletries and secondhand clothes from the school, which Ms. Altukhova lists in a log book and then signs out to whoever comes by during the pauses in shelling.

For the past week, leading up to Orthodox Easter on Sunday, the challenge was gathering the necessary ingredients for a proper lunch, a job that fell to Ms. Afanasenko, 44, the designated cook.

By Sunday she had what she needed after racing to her apartment: mushrooms and canned olives that she had kept since last fall, mayonnaise stored months in advance and onions she had watered outside the basement. Volunteers brought eggs, cakes and, two days before the holiday, holy water.

In the half-dark of the basement, with sunflower-printed napkins and a table arrangement of tulips picked from the neighborhood, the residents of No. 172 raised paper cups of wine and hugged one another.

“When it all ends, we’ll just visit our homes,” Ms. Altukhova joked. “And we’ll be living here!”