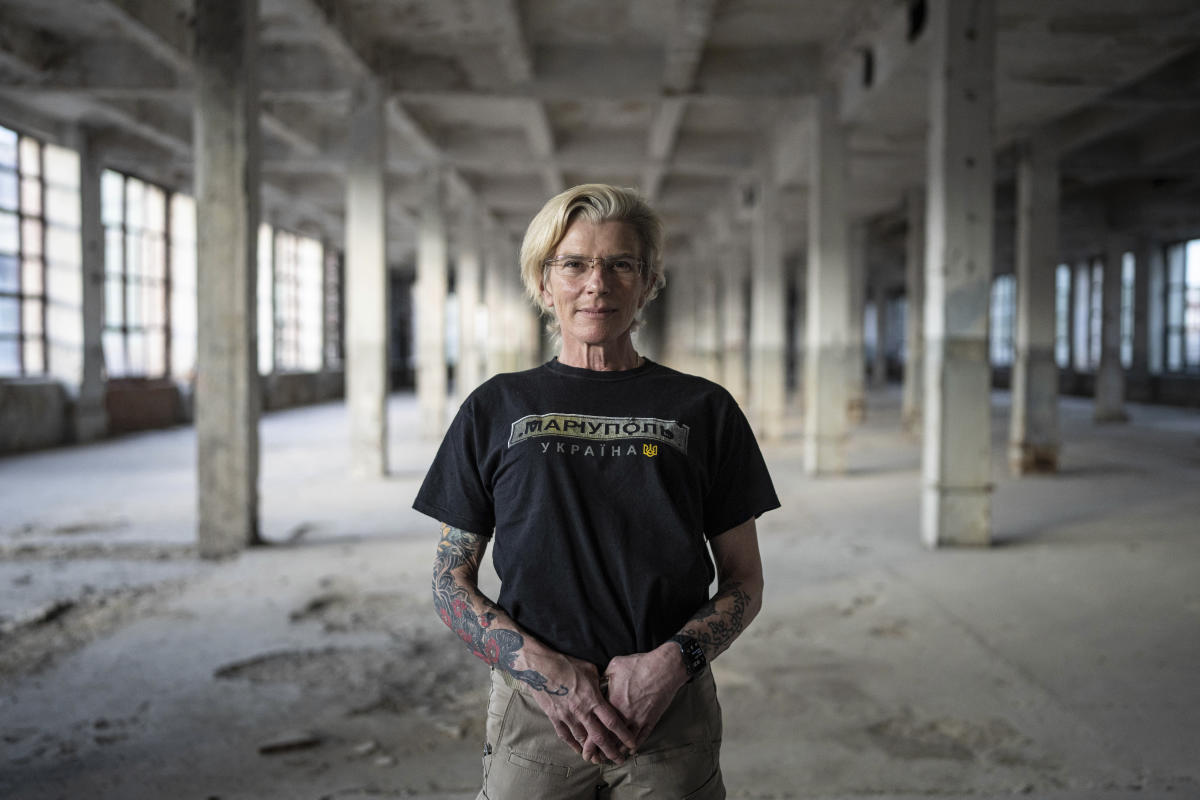 KYIV, Ukraine (AP) — The captive Ukrainian medic’s eyeglasses had long since been taken away, and the face of the Russian man walking past her was a blur.

Yuliia Paievska knew only that her life was being traded for his, and that she was leaving behind 21 women in a tiny three- by six-meter (10- by 20-foot) prison cell they had shared for what felt like an eternity. Her joy and relief was tempered by the sense that she was abandoning them to an uncertain fate.

Before she was captured, Paievska, better known throughout Ukraine as Taira, had recorded more than 256 gigabytes of harrowing bodycam footage showing her team’s efforts to save the wounded in the besieged city of Mariupol. She got the footage to Associated Press journalists, the last international team in Mariupol, on a tiny data card.

The journalists fled the city on March 15 with the card embedded inside a tampon, carrying it through 15 Russian checkpoints. The next day, Taira was taken by pro-Russia forces.

Three months passed before she emerged on June 17, thin and haggard, her athlete’s body more than 10 kilograms (22 pounds) lighter from lack of nourishment and activity. She said the AP report that showed her caring for Russian and Ukrainian soldiers alike, along with civilians of Mariupol, was critical to her release.

She chooses her words carefully when discussing the day she was taken captive, and is even more cautious when discussing the prison for fear of endangering the Ukrainians still there. But she is unequivocal about the impact of the video released by the AP.

“You got this flash drive out and I thank you,” she said in Kyiv to an AP team that included the journalists in Mariupol. “Because of you, I could leave this hell. Thanks to everyone involved in the exchange.”

She still feels guilty about those she left behind and said she will try her best to help free them.

“They are all I think about,” she said. “Every time I grab a cup of coffee or light a cigarette, my conscience pains me because they can’t.”

Taira, 53, is one of thousands of Ukrainians believed to have been taken prisoner by Russian forces. Mariupol’s mayor said recently that 10,000 people from his city alone have disappeared either by capture or while trying to flee. The Geneva Conventions single out medics, both military and civilian, for protection “in all circumstance. ”

Taira is an outsized personality in Ukraine, famed for her work training field medics and instantly recognizable by her shock of blond hair and the tattoos that circle both arms. Her release was announced by Ukrainian President Volodymyr Zelenskyy.

Despite the weight loss and all she has endured, she is still vibrant. She smokes constantly, lighting one cigarette after another as if trying to make up for the three months she had none. She speaks quietly, without malice, and her frequent smiles light her face deep into her brown eyes.

A demobilized military medic who suffered back and hip injuries long before the Russian invasion, Taira is also a member of the Ukraine’s Invictus Games team. She had planned to compete this April in archery and swimming, and her 19-year-old daughter was permitted to compete in her place instead.

Taira received the body camera in 2021 to film for a Netflix documentary series on inspirational figures being produced by Britain’s Prince Harry, who founded the Invictus Games. But when Russian forces invaded in February, she trained the lens on scenes of war.

The camera was on when she intervened to treat a wounded Russian soldier, whom she called “sunshine,” as she does nearly everyone who comes into her life. She chronicled the death of a boy and the successful effort to save his sister, who is now one of Mariupol’s many orphans. On that day, she collapsed against a wall and wept.

Reviewing the video, she said it was a rare loss of control.

“If I cried all the time, I wouldn’t have time to deal with the wounded. So during the war, of course, I became a little harder,” she said. “I shouldn’t have shown that I was breaking down. … We can mourn later.”

The children weren’t the first or the last she treated, she said. But they were part of a larger loss for Ukraine.

“My heart bleeds when I think about it, when I remember how the city died. It died like a person — it was agonizing,” she said. “It feels like when a person is dying and you can’t do anything to help, the same way.”

Taira gathered a group of 20 people hiding in her hospital’s basement, mostly children, into a small yellow bus to take them away from Mariupol. The city center was on the verge of falling, and Russian checkpoints blocked all the roads leading out.

That’s when the Russians saw her.

“They recognized me. They went away, made a call, came back,” she said. “As far as I can tell, they already had a plan.”

She believes the children made it to safety. She avoids disclosing details about that day for reasons she said she couldn’t fully explain.

But she appeared five days later on a Russian news broadcast that announced her capture, accusing her of trying to flee the city in disguise.

On the video, Taira looks groggy, and her face is bruised. As she reads a statement prepared for her, a voiceover derides her as a Nazi.

Inside the prison system, detainees were subjected to the same kind of propaganda, she said. They heard that Ukraine had fallen, that the Parliament and Cabinet had been dissolved, that the city of Kyiv was under Russian control, that everyone in the government had fled.

“And many people started to believe it. You’ve seen how this happens under the influence of propaganda? People start to despair,” Taira said. “I didn’t believe it, because I know it’s foolish to believe the enemy.”

Every day, they were forced to sing the Russian national anthem — twice, three times, sometimes 20 or 30 times if guards didn’t like their behavior. She hates the anthem even more now, but talks about it with a flash of humor and defiance.

“I found it a plus because I’ve always wanted to learn to sing — then suddenly I had the time and a reason to practice,” she said. “And it turns out that I can sing.”

Her jailers in the Russian-controlled Donetsk region pressured her to confess to killing men, women, children. Then they started on accusations of organ trafficking that she found insulting in their absurdity.

“Seized organs on the battlefield. Do you have any idea how complicated this operation is?” she asked, dismissing the allegation with a brief profanity. “It’s invented, a huge fabrication.”

“I’m terribly stubborn by nature. And if I’m accused of something I haven’t done, I won’t confess for anything. You can shoot me, but I won’t confess,” she said.

After endless, repetitive putrid weeks broken only by salt-free porridge with bacon, packets of reconstituted mashed potatoes, cabbage soup and some canned fish, Taira found herself in the three- by six-meter (10- by 20-foot) cell with 21 other women, 10 cots and very little else. They were held in a maximum security prison with no trial and no conviction.

She won’t go into details about how they were treated, but said they had no information about their families, no toothbrushes, few chances to wash. Her health started to fail.

“I’m not 20 years old anymore and this body can take less than it used to,” she said ruefully. “The treatment was very hard, very rough. … The women and I were all exhausted.”

Taira’s experience is consistent with Russia’s repeated violations of international humanitarian law on how to treat detained civilians and prisoners of war, said Oleksandra Matviichuk, head of Ukraine’s Center for Civil Liberties.

“Before the large-scale invasion, Russia tried to hide this violation. They tried to pretend they are not involved in this violation,” she said. “Now, Russia doesn’t care.”

At one point, one of her jailers came to her and said he’d seen a video of her abusing a Russian soldier. She knew that wasn’t possible and demanded to see the video, but was refused.

Now, looking at the image of her tenderly wrapping a Russian soldier in a blanket, she knows it was yet another lie.

“This is the video, here it is. I really treated everyone this way, brought them in, we stabilized them, did everything that was necessary,” she said.

At another point near the end of her captivity, someone brought her out for what she assumed was yet another pointless interrogation. Instead, there was a camera.

“I was asked to record a video saying I was fine, the food is OK, the conditions are OK,” she said. It was a lie, she added, but she saw no harm in this one. “After this video, they told me, maybe you will be exchanged.”

Then she went back to her cell to wait. She had dreams of walking free that felt true. But she tried not to feel too much hope, so that she wouldn’t be crushed if it didn’t happen.

More time passed until she was finally allowed out, blindly passing the Russian prisoner exchanged for her.

On a recent day in the Ukrainian capital, Taira headed to the Kyiv archery range deep in an abandoned Soviet-era factory. She embraced her coach and other athletes there, then settled into training for the first time since before the war.

Her shots were precisely aimed at the paper target, hitting the bullseye. But she had to lean on a support for her chronic injuries, and she tired quickly. She retreated to a cavernous workshop to chain smoke, tapping the ashes into a metal can and gazing out the window.

Her husband, Vadim Puzanov, said Taira remained fundamentally the same despite three months of captivity and is open about what she endured.

“Perhaps there will be long-term consequences, but she is full of plans,” he said. “She is moving on.”

Those plans are clear and prioritized: Recover her health, take part in next year’s Invictus Games, and write a book, a sort of self-help for people she hopes will never need the advice. She smiled calmly as she explained.

“I plan to put together information about life in captivity,” she said. “How should they behave? How to create conditions to make it easier to endure? What is the psychology?”

Asked if she had feared death in captivity, Taira said it was a question her jailers asked often, and she had a ready answer.

“I said no because I’m right with God,” she told them. “But you are definitely going to hell.”

Follow the AP’s coverage of the war at https://apnews.com/hub/russia-ukraine