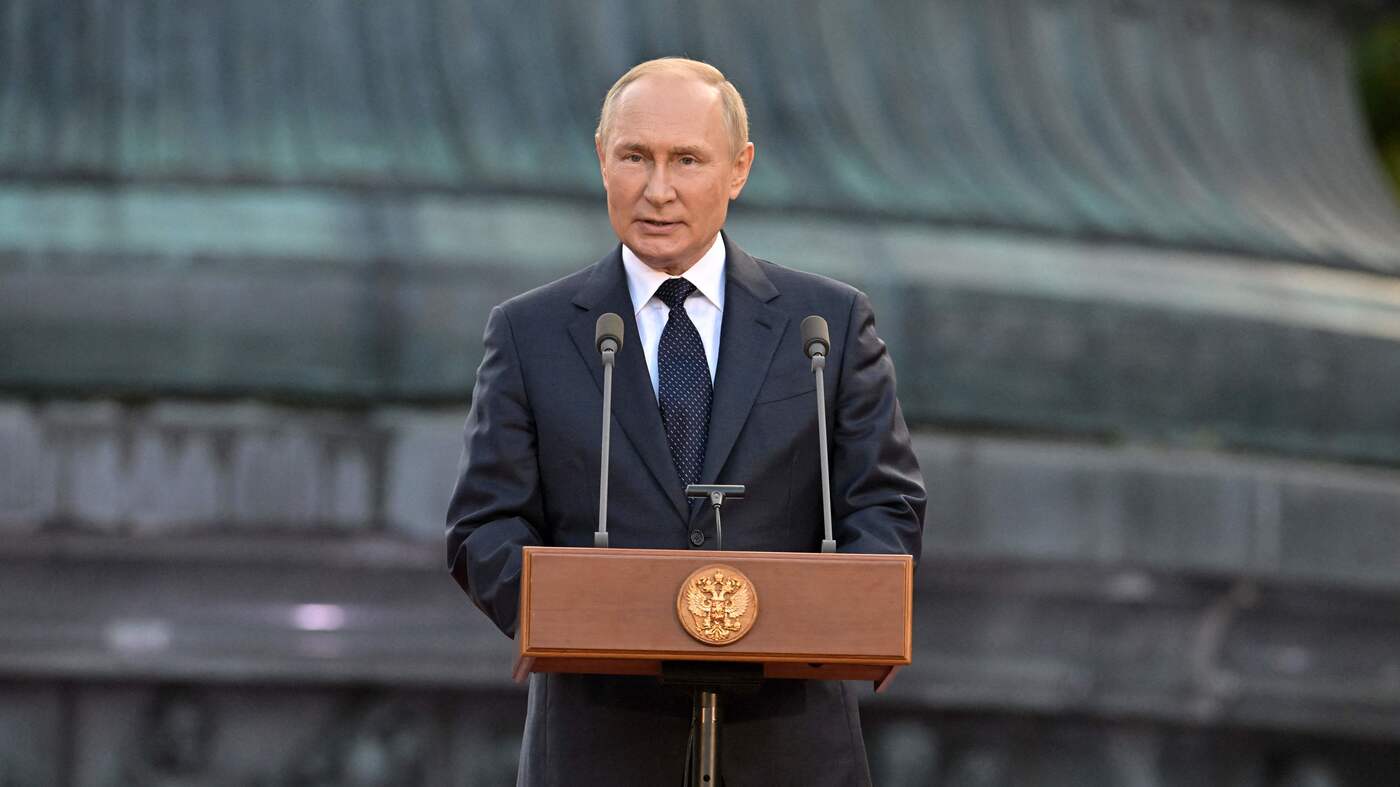 Russian President Vladimir Putin gives a speech Wednesday at a ceremony. In separate remarks, Putin said Russia will mobilize additional troops to fight in Ukraine and he expressed support for referendums in parts of Ukraine on joining Russia.

Russian President Vladimir Putin gives a speech Wednesday at a ceremony. In separate remarks, Putin said Russia will mobilize additional troops to fight in Ukraine and he expressed support for referendums in parts of Ukraine on joining Russia.

He sent troops to storm the capital Kyiv in the first days of the war, only to have them retreat a month later. He wagered that the West and other countries would not act in such a swift and coordinated manner to isolate Russia.

Despite this track record, Putin’s latest gamble may be his biggest yet. In the face of battlefield setbacks, the Russian leader has doubled down. Russia will mobilize 300,000 additional troops — a number larger than the original invasion force — and Moscow also appears poised to annex Ukrainian territory under its control.

“Washington, London and Brussels are openly urging Kyiv to bring the fight to Russian territory and defeat Moscow by any means,” Putin said in a speech that portrayed Russia as a country under siege by “the collective West.”

Yet Putin called it a “partial mobilization,” and continues to call the conflict a “special military operation.” This appears to be a nod toward Russians who have misgivings about the military adventure in Ukraine.

Putin’s moves will need time to play out on the battlefield.

But the Russian leader is already facing a new wave of international criticism led by President Biden. In his remarks to the U.N., Biden described the conflict in Ukraine as a “war chosen by one man.” He said Russia is “trying to extinguish Ukraine’s right to exist” and is carrying out a large numbers of war crimes.

The U.S. president also said Putin was making “overt nuclear threats against Europe.” This was a reference to Putin’s remark that Russia has “various means of destruction.” Putin has issued veiled nuclear warnings previously. Now, he says, “This is not a bluff.”

In his remarks, Zelenskyy said, “A crime has been committed against Ukraine, and we demand punishment.”

“Ukraine wants peace, Europe wants peace, the world wants peace, and we have seen who is the only one who wants war,” Zelenskkyy added. “There is only one entity among all U.N. member states, who would say now, if he could interrupt my speech, that he’s happy with this war.”

Moscow police officers detain a woman on Wednesday at a protest against the mobilization of up to 300,000 reserve troops to fight in Ukraine. Hundreds of protesters were arrested nationwide.

Moscow police officers detain a woman on Wednesday at a protest against the mobilization of up to 300,000 reserve troops to fight in Ukraine. Hundreds of protesters were arrested nationwide.

Other Ukrainian officials say Putin is acting now because he knows he’s in trouble and he wants to change the narrative, which has focused on Ukraine’s military advances in recent weeks.

A ballot that could lead to annexation

Putin’s military announcement was accompanied by other risks as well.

The Russian leader expressed his support for choreographed referendums in four partially-occupied regions in eastern and southern Ukraine to formally join the Russian Federation.

Putin’s endorsement came just one day after the Russia-backed separatist leaders in Ukraine announced they would hold five days of voting that would get underway as soon as Friday.

In recent months, Moscow had worked to lay the groundwork for eventual annexation. Key Kremlin advisors were dispatched to oversee integration efforts through proxy governments. But as the fighting raged on, the voting was put off.

Even now, Russia and its separatist allies in Ukraine have not publicly addressed any of the obvious questions. For example, how is possible to hold a credible ballot in the middle of a war zone, where much of the population has fled and daily life has been turned upside down?

Ukraine and its supporters have dismissed the entire exercise a sham, and Western countries have already made clear there’s no chance it will win international approval.

Ukraine says Russia is holding these referendums so it can formally declare the lands to be Russian territory — and then argue that it is Ukraine that is attacking Russian lands.

“This is a cynical attempt in response to what is going on on the battlefield,” Mykhailo Podolyak, a top Zelenskyy advisor, told NPR. “There’s no legal basis for this. You can’t have a referendum in a place that is currently under military occupation. This is to distract from Ukraine’s effective counteroffensive.”

From Russia’s perspective, the referendums and annexation could be carried out quickly, while the mobilization of additional troops appeared an even greater challenge.

Almost immediately, Putin’s announcement stirred debate over just who — and how — many would ultimately be called to serve.

The move sparked protests in dozens of cities across Russia, as primarily younger Russians defied government warnings of criminal penalties.

By Wednesday night, police had made more than 1,300 arrests nationwide, including at least 500 in Moscow.

Meanwhile, Russia’s parliament in Wednesday approved laws criminalizing desertion and voluntary surrender by Russian troops. The punishment can be up to 10 years in prison.

Yet many military analysts in the U.S. predicted the mobilization effort would not provide a quick solution for Russia’s military problems.

They noted that many of the best Russian troops have not fared well in combat with Ukrainians over the past seven months, adding that the reservists have generally not had the same level of training or experience.

Also, sending fresh troops into battle is unlikely to make much of a difference if Russia can’t solve other chronic military problems in Ukraine, including poor leadership, breakdowns in logistics, and the loss of large quantities of equipment.

Over 25 deaths as packed tractor wagon overturns in India

Over 25 deaths as packed tractor wagon overturns in India