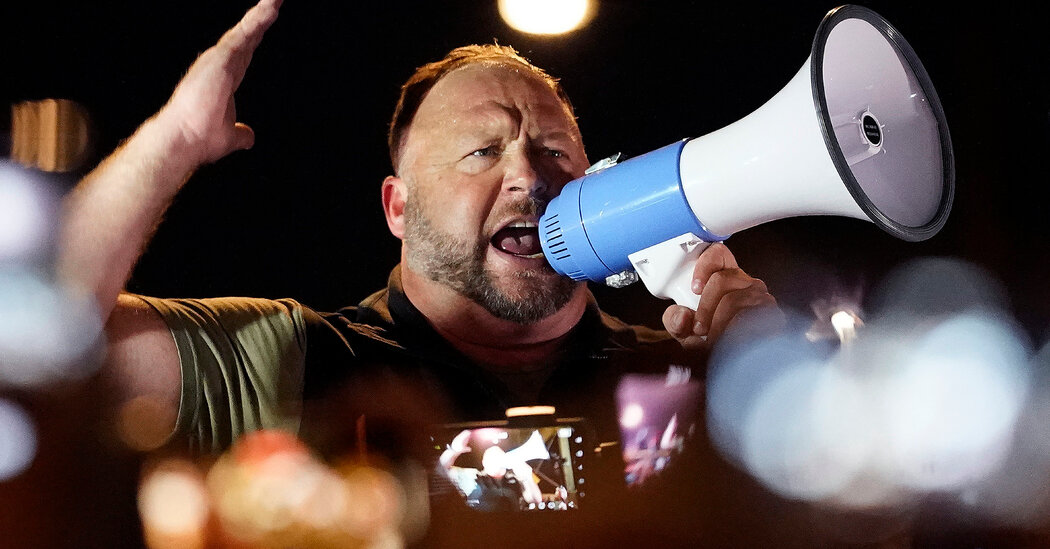 WASHINGTON — Alex Jones, the far-right Infowars broadcaster and an ally of former President Donald J. Trump, has spent 25 years and reaped millions of dollars stoking suspicion and defiance of what he calls the federal “deep state.” Now, with his conspiracy empire under threat, Mr. Jones is seeking government relief.

In an objection filed to Judge Christopher Lopez, Mr. Epstein said the motion seemed to be an effort by Mr. Jones to delay the damages trials and force the families into a settlement dictated by him, while keeping control of his business. He added that approval of Mr. Jones’s plan risked “purposefully stacking the deck against the most vulnerable of creditors.”

Days later, Mr. Jones reached out to the Justice Department, looking to share what he knows about the Jan. 6, 2021, Capitol riot in exchange for immunity from prosecution. An immunity deal seems unlikely, two people familiar with Mr. Jones’s offer said.

Mr. Jones’s maneuvers come amid growing recognition among some far-right conspiracy theorists that pushing the boundaries of legal public discourse carries potentially heavy personal consequences. More than 200 of the roughly 800 people arrested after the Jan. 6 riot have pleaded guilty to the charges. Ali Alexander, a “Stop the Steal” organizer who marched with Mr. Jones to the Capitol after Mr. Trump’s speech on Jan. 6, received a grand jury subpoena and is cooperating with the Justice Department investigation.

Mr. Jones portrays himself as a fearless truth teller, defending the First Amendment against government efforts to silence him. But his responses to the Jan. 6 investigation and the Sandy Hook lawsuits suggest he is chiefly interested in protecting his livelihood. Sued for defamation by the families of 10 Sandy Hook victims, Mr. Jones lost the cases last year and has been working to shield his fortune from coming damages awards.

Even as he described his offer to cooperate, Mr. Jones unleashed a barrage of false claims against the government. “My god!” he said on his show last week. “The F.B.I. and Justice Department’s fingerprints are all over this damn thing, and you want to come ask me about it? You want to find out what really happened, why don’t you look in the damn mirror and you can tell me!”

Mr. Jones, who broadcasts his conspiracy theories alongside ads selling diet supplements, doomsday prepper gear, videos and other goods aimed toward his listeners’ distrust of government, reaped revenues of $56 million in 2021, one of his lawyers estimated last week.

After the Dec. 14, 2012, shooting that killed 20 first graders and six educators at Sandy Hook Elementary School in Newtown, Conn., Mr. Jones bolstered traffic to his Infowars Store while broadcasting lies that the massacre was a staged government pretext for draconian gun control and that the families were “actors” in the plot. In 2018, the families of 10 Sandy Hook victims and an F.B.I. agent implicated in the false claims sued Mr. Jones for defamation in four separate lawsuits in Connecticut and Texas.

Over four years of litigation, Mr. Jones racked up more than $1 million in court sanctions for blowing court deadlines, evading court orders for documents and testimony, and submitting business records that were erroneous or fabricated. In late 2021, the judges in each trial ruled Mr. Jones liable by default, a sweeping victory for the families. Juries will next decide how much Mr. Jones must pay in damages, in trials that were supposed to begin this week.

This month, lawyers for the families in Texas filed a separate lawsuit claiming that with the trials looming, Mr. Jones “conspired to divert his assets to shell companies owned by insiders like his parents, his children and himself,” while claiming heavy financial losses. The suit accuses Mr. Jones of drawing $18 million out of Infowars between 2018 and 2021, plus his $600,000 annual salary, and funneling $54 million to shell companies, moves “designed to siphon off the Jones debtors’ assets to make them judgment-proof.”

That litigation is continuing. Mr. Jones’s lawyer, Norm Pattis, did not respond to requests for comment.

Then, on April 18, a week before juries were scheduled to decide on damages, came Mr. Jones’s bankruptcy filing. The Justice Department’s bankruptcy monitor filed a swift objection, saying the filing appeared to be an effort to stall the jury trials.

Bolstering this view is the fact that Mr. Jones did not file for bankruptcy himself, even though he generates and controls all of Infowars’ income, and is the chief defendant in the Sandy Hook lawsuits. Instead, the bankruptcy filing was for three Infowars offshoots with no income, assets or employees.

Mark Schwartz, an accountant and Infowars’ proposed restructuring officer, justified that move last week by saying bankruptcy for Mr. Jones would “ruin his name and harm his ability to sell merchandise.”

Mr. Jones wants the bankruptcy court to approve a settlement fund of $10 million, to be split among plaintiffs in several lawsuits against him. The implicit offer to the Sandy Hook families was to take their chances on litigation that has dragged on for four years, or settle for a fraction of the estimated half-billion dollars Mr. Jones and his misinformation empire have earned since their loved ones’ murders.

The families want to see Mr. Jones answer in court.

On Wednesday they filed a motion to dismiss his bankruptcy motion. “These bankruptcy cases were filed to improperly delay these trials” and “attempt to liquidate plaintiffs’ claims in this venue instead of by juries of their peers,” the motion said, adding, “They have no valid bankruptcy purpose, and they should be dismissed with prejudice as bad-faith filings.”

Judge Lopez has scheduled a status conference on the bankruptcy motion for Friday.

Analysis: Putin's winter of inhumanity takes Ukraine war and US aid to a new level