Explorers find cameras left on a glacier 85 years ago 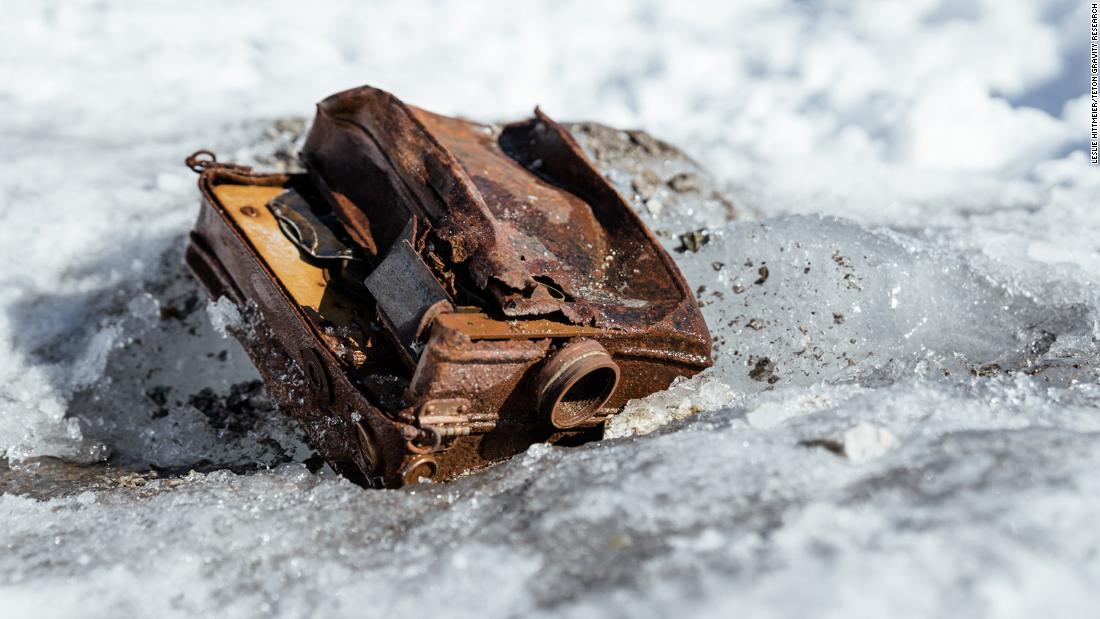 (CNN) — The quest for lost treasures has long been a staple of travel legend. So has the idea of ill-fated exploration expeditions. Now, seven months after the discovery of Ernest Shackleton’s ship HMS Endurance, comes a new discovery: the cameras of explorer Bradford Washburn, lost on a remote mountain glacier 85 years ago.

Explorer Griffin Post, leading an expedition for Teton Gravity Research, located the equipment on the remote Walsh Glacier in Canada’s Yukon Territory during a week-long search in August.

In June 1937, Washburn and his climbing partner Robert Bates set off on a mission to climb Mount Lucania — Canada’s third highest mountain at 17,147 feet, and at that time the last unclimbed peak in North America. It is part of the Kluane National Park and Reserve on the Traditional Territory of the Kluane First Nation.

They were due to start and end their climb at the Walsh Glacier, halfway up at 8,750 feet, but it wasn’t to be. Freak weather meant there was slush on the glacier — the plane which brought them there became stuck, and the pilot refused to return for the explorers. Stranded, the pair had to make not only the ascent, but also the full descent back on foot, hiking over 150 miles through the wilderness to the nearest town. In order to do that, however, they had to dump their belongings: a 900-pound cache of gear including tents, mountaineering equipment and three cameras.

The cameras were retrieved by Post’s team, along with the rest of the equipment — and two of them were still loaded with film. They have now been handed over to the Parks Canada team which will try to develop the photos.

Post tells CNN that he’d got the idea for the expedition two years ago when reading “Escape from Lucania,” which tells the story of the Washburn-Bates expedition and mentions the abandonment of the cache.

“In the epilogue they fly over the area and Washburn says, ‘We should go back and look for that gear.’ Six months later I was still thinking about it,” he says.

‘What are we doing?’

Post matched aerial photos of the glacier with their physical location.

Of course, locating something left on a moving glacier is rather more tricky than finding something buried in a regular place. During the 18 months of preparation for the expedition, Post combed through old documents, journals and correspondence to try and pinpoint the original spot, while a cache team from the University of Ottawa, led by Dr. Luke Copland, used glacial mapping processes to work out how far the cache could have traveled in eight decades.

By August, they were ready to try.

“I went back and forth between being pretty confident — we’d done the research, the scientists had provided a projection — and waking up in the middle of the night thinking, ‘What are we doing?’,” says Post. With tents, tarpaulins and skis as well as the cameras, the cache was pretty big so they thought it’d be reasonably visible. But not only might the projections have been incorrect; someone else might already have found the stash. “That said, I think if we hadn’t found it, it’d still have been a great story,” he says.

For a while, it looked like that would be the story. Six days of search turned nothing up. “By the last morning I’d come to terms with the fact that we weren’t going to find it and that it was time to move on,” says Post.

“We’d spent a lot of time and energy on it, and given it a great shot, but it wasn’t out there. I was OK with that.

“That said, we had four hours left and to not see it through to the final moment would have been disappointing. I knew we had to give it one last push.”

Then, as the clock ticked past lunchtime, the team’s on-site glaciologist Dorota (Dora) Medrzycka from the University of Ottawa came up with a theory.

“We’d covered all the range we thought it was most likely in, but on the last afternoon, Dora came up with a theory that, based on what she was seeing, we were looking in the wrong spot,” says Post.

Medrzycka realized the glacier had surged further than initial predictions.

Medrzycka had joined the project two weeks before the search, and while she hadn’t been part of the team that had calculated the original estimate, she says that once she was on the glacier, she “had a suspicion that it could be further down.”

And on that last day, “standing there in the middle of the glacier, it was just like a spark,” she says. “Being in the environment triggered that idea.” Was it like fate? “Almost.”

Standing on the ice, Medrzycka noticed a pattern in the moraine — the debris bank that generally runs along the top of the glacier.

“Instead of being continuous it sort of stopped in the middle. And I saw there were two long gaps on the satellite photo.”

Some glaciers occasionally “surge” — speeding up to a rush for one or two years, before returning to their normal pace. The group knew the Walsh Glacier was a surger — it had happened twice since 1937 — but each glacier surges at a different speed. In fact, they now know that instead of the regular 100-200 meters (328-656 feet) per year of movement, during its surges the Walsh had moved 1 kilometer (0.6 miles) per year.

Looking at the gaps in the debris, Medrzycka had that spark. The gaps in the moraine corresponded to the surges, she realized — where the glacier had been moving too fast to accumulate debris. By seeing how long those gaps were, she could see that the glacier had surged further and faster than they had originally predicted.

For the last three hours of the search, they moved two kilometers (1.6 miles) further than the furthest point of their original target area — and almost immediately one member of the team spotted a fuel canister.

“The cache was in a semi-buried state,” says Post. “The tents were protruding through the ice. Some things you could have just picked up. There were goggles, clothes, items indisputably from that experience based on the photos.

“You literally couldn’t have scripted a better ending.”

Medrzycka remembers seeing a “big piece of canvas — a tent or the tarps that covered everything” and calls the moment “truly incredible.”

“The chance that we’d find such a small cache on such a huge glacier was small. Everyone had given up hope, so it was really epic. There was surprise, disbelief, and huge relief — my guess was right, the pressure was off. We couldn’t be happier.”

The cameras — with film inside

Washburn’s Fairchild F-8 aerial camera (the lens is pictured) was in fragments but the other two were intact.

Due to the movement of the glacier over 85 years, the items had been spread out “tens of meters” from each other, says Medrzycka — but that afternoon, the team found almost the whole cache, minus a few items that had been carried away by meltwater over the years.

Amongst the haul were three cameras: Washburn’s Fairchild F-8 aerial camera (he would later become famous for his aerial photos), which was damaged, and and two motion picture cameras that are still intact: a DeVry “Lunchbox” model and a Bell & Howell Eyemo 71A.

The latter two had film in them — they’ve now been handed over to the University of Ottawa to see if they can recoup footage. “We know some of the film has been exposed, and if it survived 85 years on a glacier with such improbable odds, being a relentless optimist I’m cautiously optimistic some will be salvageable,” says Post.

The team made the discovery in the final hours of their search.

For Medrzycka, the biggest contribution is understanding the evolution of the Walsh Glacier.

“We have satellite images from today to 2000, and then a bit going back to the 1960s, but nothing before that. Going back to the 1930s shows us how the flow has changed, and I think it’s pretty unique for this reason,” she says.

“It teaches us that it’s important to look at longer timescales if we want to understand how glaciers are changing with climate change.” They’re still crunching the data about what it could mean.

So what’s next for Post and his team? After all, as he admits, once you’ve found a historic stash of equipment that’s been lost for 85 years, “just going skiing doesn’t sound as exciting anymore.”

“Some people have reached out with items that have been lost and I’d be lying if I didn’t say they’ve piqued my interest,” he says.

When they were making this trip, people asked them to look out for the remains of the Douglas C-54 Skymaster plane that crashed with 44 people on board in 1950. Several people in Yukon thought it might be in the area — although they didn’t find anything.

But maybe they’ll go back.

“It seems like a worthy thing to look for, but I’d need some time to do some research,” he says.

In the meantime, he’s thrilled to have found the 1937 stash, and the team is already in contact with the families of Washburn and Bates, both of whom died in 2007.

“It’s an amazing adventure and survival story,” says Post of the 1937 expedition — adding that even if they hadn’t found the gear it’d have been worth it.

“Creating challenges for yourself and pursuing them even if they’re that improbable is such a fun part of life. If we hadn’t found it we wouldn’t feel as enthusiastic but it’d still have been part of the journey — and those kind of challenges are what drive us all.”