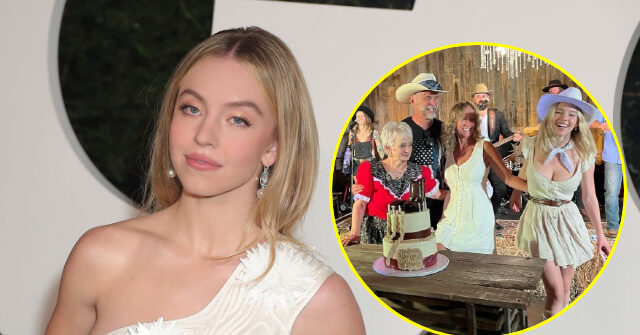 Euphoria star Sydney Sweeney responded to the woke onslaught she faced after posting photos from her mother’s 60th birthday party — which suggested she might have conservative acquaintances — and implored her fans to “please stop making assumptions.”

“You guys this is wild,” Sweeney wrote. “An innocent celebration for my moms milestone 60th birthday has turned into an absurd political statement, which was not the intention. Please stop making assumptions.”

“Much love to everyone ♥️ and Happy Birthday Mom!” the actress added.

You guys this is wild. An innocent celebration for my moms milestone 60th birthday has turned into an absurd political statement, which was not the intention. Please stop making assumptions. Much love to everyone ♥️ and Happy Birthday Mom!

Sweeney, who is perhaps best known for playing Cassie Howard on HBO’s Euphoria, fell under attack Saturday after posting several photos from the party to her Instagram account.

In one photo, a man is seen clad in what appears to be a Blue Lives Matter “Thin Blue Line” t-shirt, and other family members can be seen in a video wearing a hat that says “Make Sixty Great Again” — a parody of the “MAGA” slogan that fueled former President Donald Trump’s 2016 White House run.

The actress’s brother Trent also posted a few photos from the party, which clearly displayed the “Great Again” slogan on two guests’ hats, much to the dismay of the woke outrage mob.

But in today’s polarized society, people are not free to wear whatever they want in public without finding themselves under attack by a woke mob. Upon seeing the photos, outraged leftists swiftly attacked Sweeney, with several calling her family “racist.”

“You should’ve selected other pictures to post that wouldn’t be left up to interpretation in this manner. Lesson learned for you,” one Twitter user lectured.

“Your family are wearing MAGA hats and blue lives matter shirts, they’re racist,” another declared. “Time to face reality sweets, just because your white and famous doesn’t mean you get to have it all.”

“[Z]endaya would never do this,” another Twitter user said of Sweeney’s Euphoria co-star.

“girl they were wearing MAGA hats and blue lives matter T-shirts you can NOT be serious,” another lamented.