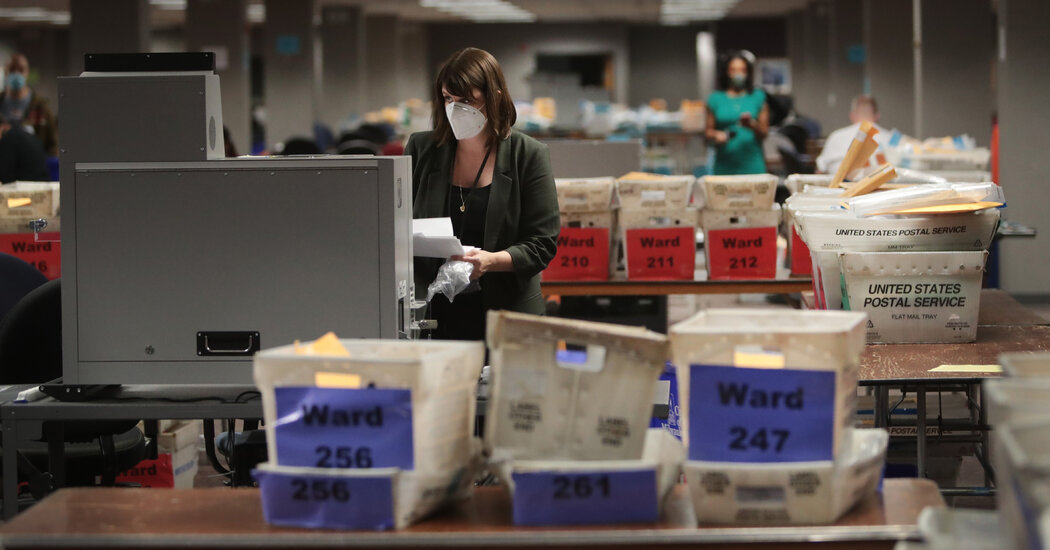 WASHINGTON — “Do you feel safe? You shouldn’t.”

In August, 42-year-old Travis Ford of Lincoln, Neb., posted those words on the personal Instagram page of Jena Griswold, the secretary of state and chief election official of Colorado. In a post 10 days later, Mr. Ford told Ms. Griswold that her security detail was unable to protect her, then added:

“This world is unpredictable these days … anything can happen to anyone.”

Mr. Ford paid dearly for those words. Last week, in U.S. District Court in Lincoln, he pleaded guilty to making a threat with a telecommunications device, a felony that can carry up to two years in prison and a fine of up to $250,000. He did not immediately respond to a request for comment.

But a year after Attorney General Merrick B. Garland established the federal Election Threats Task Force, almost no one else has faced punishment. Two other cases are being prosecuted, but Mr. Ford’s guilty plea is the only case the task force has successfully concluded out of more than 1,000 it has evaluated.

Public reports of prosecutions by state and local officials are equally sparse, despite an explosion of intimidating and even violent threats against election workers, largely since former President Donald J. Trump began spreading the lie that fraud cost him the 2020 presidential election.

The sluggish pace has sparked consternation among both election workers and their supporters, some of whom say they are souring on the idea of reporting the menacing messages to prosecutors if nothing comes of it.

“The reaction usually is ‘Thank you for reporting that; we’ll look into it,’ and there’s no substantive follow-up to understand what they’re doing,” said Meagan Wolfe, the president of the National Association of State Election Directors. That leads some “to feel there isn’t adequate support that can deter people from doing this in the future,” she added.

The depth of election workers’ fear was underscored in hearings this month by the congressional panel investigating the Jan. 6, 2021, assault at the U.S. Capitol. Ruby Freeman and Shaye Moss, who are mother and daughter and both election workers in Atlanta, told of being forced into hiding by a barrage of threats in December 2020, after being falsely accused of election fraud by Rudy Giuliani, who was then Mr. Trump’s personal lawyer. Protesters tried to enter a relative’s house in search of the two. Eventually, they quit their positions.

That is not the norm, but neither is it uncommon. Ms. Griswold said one Colorado county clerk wears body armor to work, and another conducts business behind bulletproof glass.

“In my experience, if someone is telling you over and over how they’re going to hang you, asking you the size of your neck so they can cut the rope right, you have to take the threats really seriously,” she said, citing threats she had received.

The city clerk in Milwaukee, Claire Woodall-Vogg, said she had “completely redesigned our office at City Hall for safety reasons” after receiving hundreds of threats, which she said had been forwarded to the task force.

An investigation by Reuters in September turned up more than 100 threats of death or violence to election officials in eight battleground states, which at that time had produced four arrests and no convictions.

A survey in March by the Brennan Center for Justice found that one in six local election officials have personally experienced threats, and nearly a third said they knew people who had left their jobs at least in part because of safety concerns.

Justice Department officials declined to comment on the task force’s progress. The department has said previously that the task force was tracking and logging election-related threats, and had opened dozens of criminal investigations as a result. That led to charges in February against men from Texas and Nevada and the recent guilty plea in Nebraska.

The task force also has conducted training and education sessions on threats with state and local law enforcement and election officials and social media platforms. Each of the 56 F.B.I. field offices has assigned an agent to collect and analyze threat reports, and federal prosecutors have been trained in assessing and investigating threats.

The trickle of prosecutions in the wake of those moves is explained in part by federal law, which defines illegal threats extremely narrowly in the name of preserving the constitutional right to free speech.

“You need to say something like, ‘I am going to kill you.’ It can’t be ‘Someone ought to kill you,’” said Catherine J. Ross, a professor and expert on First Amendment law at George Washington University. “That’s a very high bar, and intentionally a high bar.”

That so-called true threat doctrine classifies even many extreme statements as protected political speech. That rules out charges in a great many cases of threats against election officials — even when the recipients feel terrified for their lives.

Joanna Lydgate, founder and chief executive officer of the bipartisan legal watchdog organization States United Democracy Center, said she was encouraged to see results from the task force and understood, “These cases can be challenging to bring, and they take time.”

She said: “We definitely hope to see more of this from DOJ, because investigating these threats, building these cases and holding people accountable is critically important, especially as we’re looking toward the midterms.”

In Arizona, the office of Secretary of State Katie Hobbs has reported more than 100 threats to the F.B.I. in the last year, said a spokeswoman, C. Murphy Hebert. Ms. Hebert said she was confident that the task force was reviewing those threats, but that could be cold comfort to recipients who have not seen results.

“For the folks monitoring and the folks being targeted, a hundred messages saying ‘You should die’ is pretty threatening,” she said. “But based on what we know of the process,” they are not actionable, she said.

Matt Crane, the executive director of the Colorado County Clerks Association, said threats sent to him in the past year included voice mail and online chatter urging that he, his wife and children be shot in the head. He said he had reported at least one threat to the F.B.I.

But while the bureau has helped clarify how its threat review process works and has met with local clerks, he said, he still does not know whether his report was followed up on.

“It does not give a lot of comfort to the people who receive threats,” he said. “I’ve heard some say: ‘Why should I report it? I’m better off just carrying my gun with me and if something happens, at least I can do something to protect myself.’”

Other experts say the lack of both action and transparency was undermining the principal goal of the task force — to stop the epidemic of violent threats.

“Three prosecutions in a year for a problem that is nationally widespread seems awfully low,” said David J. Becker, a onetime voting rights lawyer at the Justice Department who now directs the nonprofit Center for Election Innovation & Research. “Whether accurate or not, the impression among election officials is that the effort the Department of Justice launched with great fanfare a year ago isn’t getting the job done.”

The Brennan Center report in March found that more than half the threats against election officials who were polled had gone unreported, and that a vast majority of threats were forwarded to local law enforcement agencies, not state or federal law enforcement.

Four in 10 election officials said they had never heard of the task force. And while the Justice Department has increased outreach to election officials and publicized a hotline that can be used to report complaints, “there is really very little detail about what happens when complaints are made,” said Lawrence Norden, the senior director of the center’s Elections and Government Program.

“Election officials rightly feel that public repercussions for these threats are going to be critical to curtailing them,” he said. But, so far, there have been too few court cases to provide any sense that offenders will be held accountable.

Until that changes — if it does — election officials need more reassurance that law enforcement has their back, he and others said.

“You have a lot more election officials who are exercising their Second Amendment rights than before 2020,” said Mr. Crane, the head of the Colorado clerks association. “It only takes one of these crazy people to show up at your doorstep.”