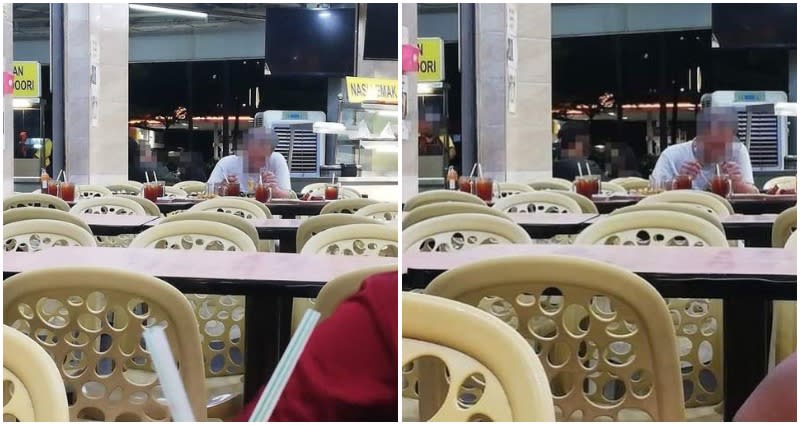 An elderly Malaysian man was seen ordering a meal for eight, complete with eight sets of dishes and cutlery, while eating alone.

A Facebook user who witnessed the moment, Zupi Bakhtiar, posted about his experience on March 18. After Malaysian radio station Zayan heard about the story, they reposted it to their official Facebook page on April 25, garnering over 3,700 reactions and over 1,000 shares.

Zupi explained in the post that while he was eating out with his family, he witnessed the man arranging eight sets of plates and cutlery around him before proceeding to eat his meal alone. When Zupi asked the waiter about the diner, he was told that the man would regularly come in about two to three times a week and order eight meals each time. He always paid for all eight meals and would request that the leftovers be packed.

“We don’t know if his family is still alive or not. It was at this time that my wife began crying. My children also got sad,” Zupi wrote.

Internet users were quick to share their own similar experiences or offer to share a meal with the gentleman. One user explained that they would always prepare a meal for their deceased father because they cannot “eat without him.” Others suggested that they would pay for the elderly man’s meal and spend time with him so he would not have to eat alone.

Information regarding the elderly man’s circumstances and his personal life are currently unknown. Zupi told Malaysian media outlet Wau Post, per Asia One, that he wishes for those who encounter the man to leave him alone and asked that the restaurant’s location remains hidden out of respect.