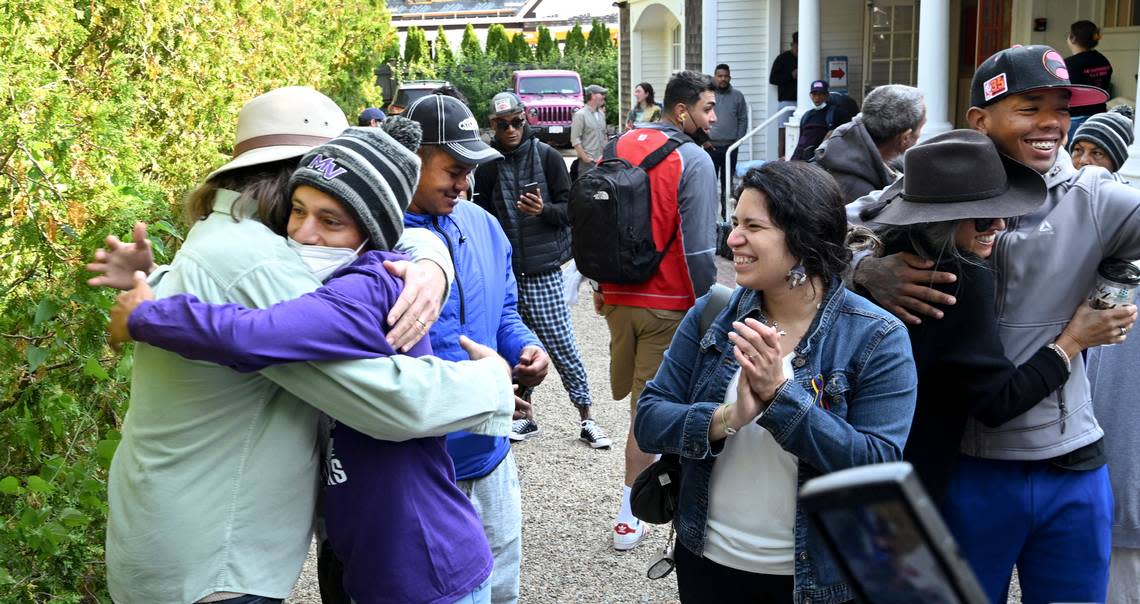 Wanna bet that’s what Snidely Whiplash — aka Florida Gov. Ron DeSantis — is saying after his latest stunt didn’t elicit the panicked response he was hoping for?

Oh sure, it got him headlines and praise and raised his political profile for his future presidential run.

But DeSantis was going for more. When he intercepted Venezuelan refugees in Texas whom he thought might be headed to Florida and put them on an airplane under false pretenses — I think he told them they were going to where pancakes or jobs grow on trees or something — he thought the residents of Martha’s Vineyard would run shrieking from their mansions, clutching their pearls and diamonds and $8,000 Gucci bags, demanding that the intruders be returned to from whence they came.

That would allow DeSantis to decry liberal hypocrisy.

As has been widely reported, though, that didn’t happen.

Many residents of the tony enclave — a phrase I’ve never used before and promise to never use again — ran out, all right, but with open hearts and arms to greet the migrants dumped without ceremony in their backyards. They offered food and clothing, and in some cases shelter, and arranged for the undoubtedly disoriented newcomers to be taken to a military base on Cape Cod, where they would have access to longer term shelter in dorm-style housing.

As the 50 or so migrants left, voluntarily, residents of the Vineyard lined up to bid them a fond adieu.

Not only was the response of the residents not what DeSantis expected, but I’m guessing he didn’t expect that he’d be the defendant in a class-action lawsuit filed by some of the misled migrants. He certainly never thought the sheriff of Bexar County, Texas would investigate him for possible human trafficking.

That’s precisely what he could be guilty of, immigration attorney Yesenia Polanco said recently. “The politicians who spent the money (to transport them) or the person who coerced them onto the plane by telling them they had jobs waiting for them” could be guilty of human trafficking.

Polanco, based in Raleigh, said she has handled more than 1,000 immigration cases in her 14 years as an attorney but has never seen or heard of anything like this.

“This is completely outrageous. I’ve seen it, but not from a public servant. Every person who was put on those planes could be considered a victim of trafficking,” she said.

Anyone who has ever traveled cross country by bus has probably seen it, too — if they knew what they were looking at. When broke, vulnerable young girls get off a bus in some strange city, there are usually smooth-talking, solicitous people there eager to offer their assistance (wink, wink) in finding legitimate jobs and a place to crash. Some people call them pimps.

How does that differ from what Silky DeSantis is accused of doing?

The irony, Polanco said, “is that every person who was put on those planes could qualify for one of two types of visas available for victims of forced labor or sex trafficking.”

“The next step,” she said, “is a thorough investigation by the FBI or by human trafficking organizations.”

Yes. The next step after that should be for the people engaged in these cynical stunts to look into their hearts and ask if any election is worth treating fellow human beings like this.

DeSantis seems to care not one whit that these are human beings, not political footballs. There was a way for him to express his frustration with what he considers lax immigration laws, but kidnapping human beings — like he’s the worst kind of human trafficker — was not the way to do it.

Polanco said “We as a country have an obligation to protect people who are fleeing persecution. Everyone of them was a potential asylee” — someone seeking political asylum. DeSantis and the other governors, she said “are playing with these people’s lives.”

Barry Saunders is a member of the Editorial Board and founder of thesaundersreport.com.