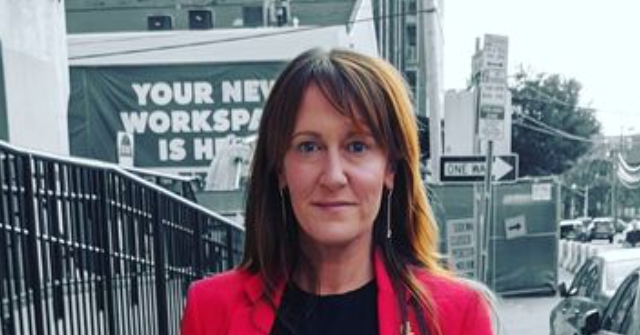 Jersey City Councilwoman Amy DeGise is resisting calls to resign after allegedly being involved in a hit-and-run with a cyclist.

DeGise – a self-described “Feminist” on her Twitter bio, who also supported a pro-abortion resolution after Roe v. Wade was overturned – is facing calls to resign after being accused of hitting cyclist, Andrew Black, 29, with her SUV at Forrest Street and Martin Luther King Drive in Jersey City on July 19.

Allegedly, she did not stop driving after hitting Black and waited six hours to report the accident, NJ.com reported.

Despite an hours-long city council meeting on Wednesday, where most of the 100 speakers called on her to resign, the councilwoman was adamant that she would not resign, Fox News reported.

“When the legal process in traffic court is finished, I will have more to say, and I can address outstanding concerns and questions. And in the meantime, I’m not resigning,” DeGise said.

“I remain committed to this position on the Council, no matter your perception of me,” she added.

The councilwoman also spoke at great length about being the subject of alleged threats and described the entire ordeal as “traumatic.”

“July 19th, and the weeks that have followed, have been some of the most difficult, traumatic times of my entire life,’ DeGise said. “I am grateful that no one was seriously injured, and I feel horrible about that situation.”

“But there is a court process that not just myself, [but] other people have to go through, that needs to be respective. So I have to limit my comments and take the advice of attorneys.”

DeGise’s comments on Wednesday doubled down on her office’s previous remarks at the end of July that she would not resign following calls for her to do so.

Many of DeGise’s critics suspect that she is trying to use her connections to “prominent Democrats, from her dad [Tom DeGise — a Hudson County Executive] to Mayor Steve Fulop to Gov. Phil Murphy” to evade responsibility for her alleged actions, according to Politico.

DeGise was previously the chairwoman of the Hudson County Democratic Organization before being elected as a “non-partisan” at-large member of the Jersey City Council.

The hit-and-run allegations, if true, would not be the first example of DeGise getting herself into trouble with a vehicle.

A recently released video from November 2021 appears to show DeGise attempting to use her position as a city councilwoman to persuade a Hoboken officer not to tow her illegally parked vehicle, which had not been registered since 2019, the Hudson County View reported.

She has also reportedly received multiple other tickets, not shown up to traffic court, and been involved in four accidents, according to NJ.com.

DeGise’s traffic court case will be heard in Essex County instead of Hudson County, where Jersey City is located, the Hudson Reporter noted.