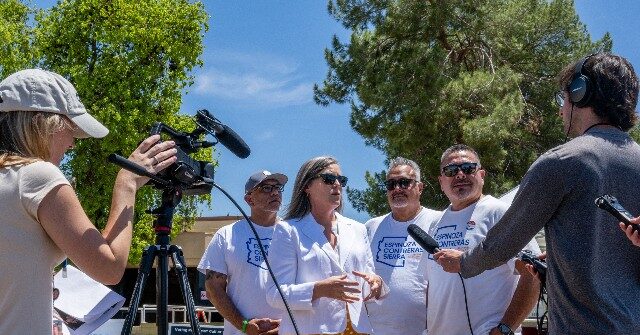 Katie Hobbs, Democrat candidate for governor of Arizona, abruptly ended an interview Wednesday when asked why she refuses to debate her Republican opponent, Kari Lake.

The Yellow Sheet Report, an outlet based in Arizona, reported that Katie Hobbs “walked out of an informal interview yesterday after our reporter asked her why she doesn’t want to debate Kari Lake.”

Hobbs reportedly claimed that Lake “had made the Republican primary debate a spectacle, and it doesn’t help anyone to be in the middle of that circus”:

Democrat @KatieHobbs STORMED out of an interview when questioned about refusing to debate @KariLake, then gets fact-checked on her claims

Hobbs also blamed the Clean Elections Commission, which is responsible for organizing debates. Hobbs told the Yellow Sheet, “They refused to provide any changes that would allow for a substantive debate.” The Yellow Sheet highlights that their reporter pointed out that “the Hobbs team never even requested any changes to the debate format beyond the request to ditch a debate entirely in favor of an event where Hobbs and Lake would appear separately.”

Hobbs responded, “That’s not true,” but she failed to specify what other changes her campaign had requested.

Hobbs then went on to conclude the interview after less than three minutes, remarking that “this is not a productive conversation, and if this is all you wanted to ask about, then I think we’re done.”

“She needs to show that she has courage and get on that stage,” Lake added.