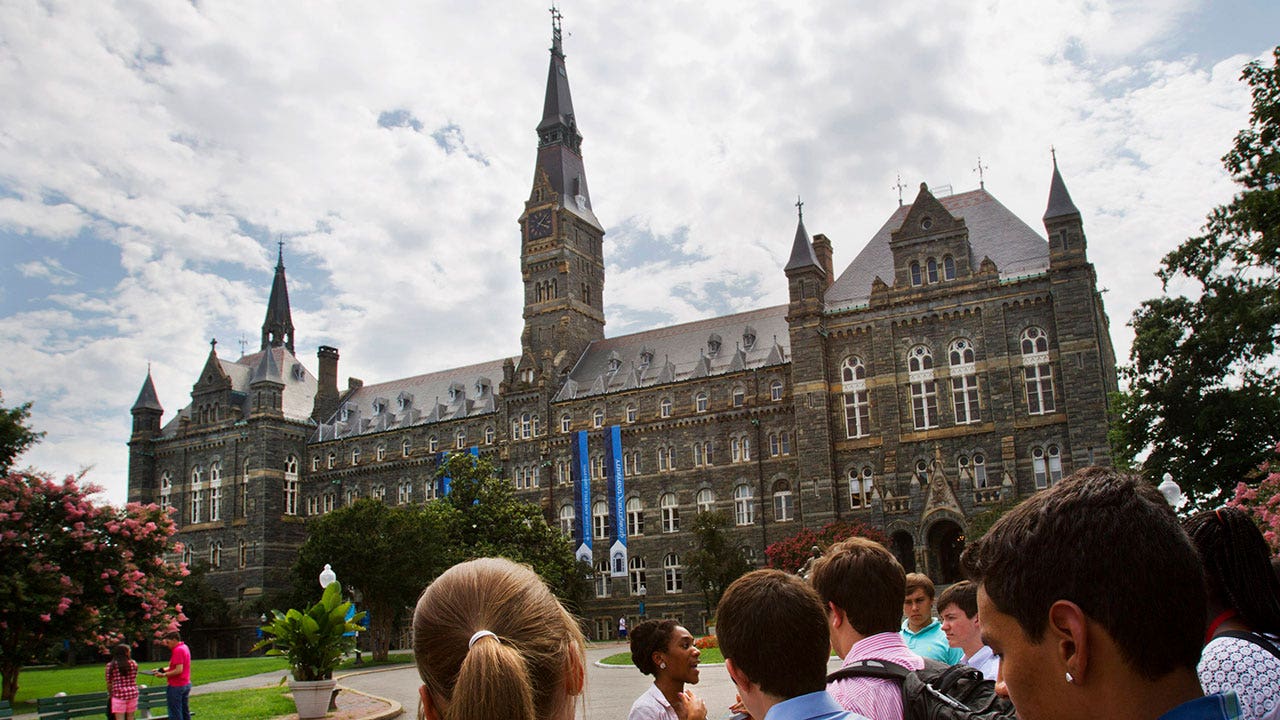 “With an actively rogue Supreme Court, U.S. lawyers, legal scholars, and law schools have to reckon with how to practice, teach, and understand law without falling into complicity with lawlessness,” Professor Heidi Li Feldman began the thread.

The Supreme Court has recently issued several opinions unpopular with progressives, including voting to overturn Roe v. Wade, the 1973 ruling that legalized abortion, and reversing a New York law that restricted people’s ability to carry concealed firearms in public.

Feldman, without naming the specific reasons she considered the court “rogue,” instructed law schools on how not to descend into “complicity with lawlessness,” while also blaming former President Trump for much of the current state of affairs.

Prospective students tour Georgetown University’s campus, on July 10, 2013, in Washington. Amin Khoury is scheduled to stand trial Tuesday June 7, 2022, in Boston, on charges that he bribed Georgetown University tennis coach Gordon Ernst to get his daughter into the school as a recruit. (AP Photo/Jacquelyn Martin, File)
((AP Photo/Jacquelyn Martin, File))

“Ordinarily, there is strength and purpose in teaching, thinking about, and, in legal practice, arguing the failures of judges, legislators, and executives to fulfill requirements of rule of law and justice,” she said. “We expect an understanding of the failures to have *traction*.”

“With the rise of the Trump-Republican Party, this traction – the ability to argue within a shared expectation of commitment to rule of law and justice – has completely evaporated. Last term’s Supreme Court decisions are just the most recent high-profile evidence for this,” she continued.

Feldman charged that Trump and members of his administration frequently “completely disregarded basic tenets of rule of law” and suggested what those in her field should do next.

“Genuine lawyers, legal scholars, and law schools will make central – to their practice, their writing, their teaching – the project of protest against and change to institutions and actors who disingenuously hold themselves out as acting in accord with and on behalf of law,” Feldman guided. “We have to show and teach that the forms and tropes of law can be used quite skillfully to mask deeply lawless judicial opinions and statutes. We have to show how commitments to individual dignity and pluralist democracy are what make law ethically and politically valuable.”

She concluded by saying, “teaching law with integrity requires creativity, courage, and honesty. We must teach critique and protest of law that only pretends to justice, fairness, and the public welfare.”

Gregg Nunziata, an attorney and the president of Rock Spring Public Policy, was one of several judicial experts or observers to reject Feldman’s take on the Supreme Court and how law schools should be responding to recent rulings.

“This is a breathtaking thread from a law professor,” Nunziata said. “The inability to accept the legitimacy of an institution that’s not captured by one’s faction somehow couched as principled, rule of law based, heroics. This is welcome in elite law schools, but only if from the Left.”

Crowds outside the Supreme Court reacting to the Dobbs ruling.
(Joshua Comins/Fox News)

“If you’re a student at Georgetown Law, I strongly recommend you not listen to this person on this particular point,” tech lawyer Preston Byrne tweeted. “When a court rules a way you disagree with it’s not lawless, it’s life.”

Ilya Shapiro, a former Georgetown Law professor who resigned from the school this year, also weighed in.

“It’s appalling that a law professor would have this view, that the Supreme Court and the legal system more broadly are illegitimate because they aren’t achieving her preferred policy results,” Shapiro told Fox News Digital. “The fact that she teaches a mandatory constitutional law class to first-year students makes it all the more alarming. Prof. Feldman certainly shouldn’t be investigated or disciplined for expressing her opinions — just like I shouldn’t have been — but this does provide even more of a window into the rot in legal academia.”

Shapiro was originally put on paid leave from his position as executive director of Georgetown Law’s Center for the Constitution after he tweeted in February about President Biden’s pledge to only nominate a Black woman for the Supreme Court. Shapiro lamented that a “lesser Black woman” would be chosen rather than his preferred choice, Obama-appointed Judge Sri Srinivasan, to fulfill a racial and gender quota.

Although Georgetown University eventually allowed Shapiro to continue at the school after an investigation, Shapiro decided to officially resign.

“Georgetown is not a place that values intellectual diversity, freedom of speech, tolerance, respect, good faith,” he told Fox News Digital at the time. “A place that excludes dissenting voices, that undermines equal opportunity. It’s not a place that anyone who dissents in any way from prevailing orthodoxies can thrive.”

Cortney O’Brien is an Editor at Fox News. Twitter: @obrienc2