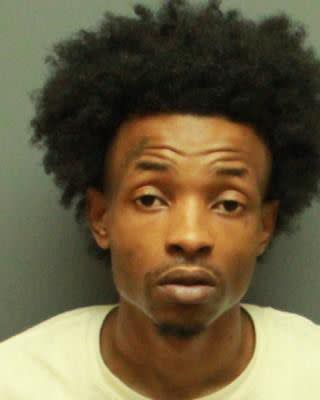 Michael Faison Jr. was standing outside the front door of a Newport News 7-Eleven Friday afternoon when a woman in a powder blue dress walked past and caught his eye.

Faison, 24, struck up a conversation with the woman about tattoos, and she “stopped, turned and walked back towards him,” court records say. The woman said later she didn’t think Faison, who sported a smiley face tattoo on his arm, would be a very good tattoo artist, but she “gave him a chance and gave him her phone number.”

The conversation didn’t sit right with the woman’s boyfriend, Divine Rahim Jackson, 28, who saw the pair talking and walked over from pumping his gas.

Court records filed Monday in Newport News General District Court said the woman tried to stop Jackson, but he “pushed past her” to confront Faison — asking him why he was talking to his girlfriend and slapping him twice.

“Divine drew a handgun from the area of his waist,” then “stepped towards Michael Faison and pointed the pistol at Michael’s face at close range,” according to the complaint by Newport News police Detective C.A. Ruhlen.

“Faison took a step backward and can be seen lifting both of his hands in a non-threatening manner,” the complaint said.

But after Jackson held the gun toward Faison for a short time, a fight between the men ensued. The complaint said Jackson was then able to break free and shot Faison in the face. Jackson and the woman then ran over to the black BMW sedan and fled from the parking lot at about 5:30 p.m.

Faison was taken to Riverside Regional Medical Center, where he was pronounced dead just before 10 p.m.

Investigators learned that Jackson and the woman had eaten at a Mexican restaurant a couple blocks from the 7-Eleven, located in the 12400 block of Warwick Boulevard near Todd Stadium. Surveillance footage shows Jackson pulling out his weapon — a silver and black handgun with an extended magazine — and dangling it in front of the woman’s face as the two sat at a booth.

Investigators found the BMW in the 800 block of Lassiter Drive at about 6:30 p.m., placing it under surveillance. Just after midnight, the woman was spotted walking a few blocks away.

The woman told detectives she and Jackson, a rapper she knew as “Sauce,” were dating for about three months.

Police allowed her to call her mother, telling her police were getting a search warrant for her mother’s house where investigators believed Jackson was holed up. Officers soon located Jackson at the home, in the 600 block of Aqua Vista Drive.

A team of tactical officers went to the home, “and negotiations resulted in the suspect surrendering shortly afterward,” Newport News police said in a news release. Jackson was charged with second-degree murder and using a firearm in a felony.

Court documents said Jackson formerly lived in the Bronx, New York, and has lived in the Hampton Roads area for about two years. He said he wasn’t working and had some mental health issues, such as post-traumatic stress disorder.

A judge appointed the Newport News Public Defender’s Office to represent Jackson, who is next scheduled to appear in court on Oct. 17.