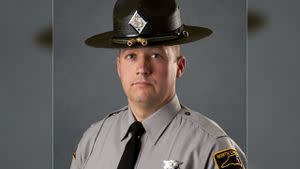 The law enforcement community gathered this afternoon to remember a state trooper who tragically lost his life in the line of duty.

In January, Trooper John Horton was responding to a traffic stop in Rutherford County.

When his brother and fellow trooper James Horton arrived at the scene, James lost control of his patrol car.

The collision resulted in the death of John, as well as the driver John had detained.

The Hortons said they have worked with the Highway Patrol station in Forest Hill for more than 10 years.

The community has steadfastly stood behind the family during the tragedy and offered them a generous gift.

Back the Blue North Carolina gave the family $92,000 that was raised through GoFundMe. The family said Horton had fathered six children before he passed away.

The family said this has been a tough time for them, but they are thankful to everyone who has shown their support.

“It’s a family and they have treated us like family, and they have come together and supported us, and come by and helped with the children. And we just really love all of them,” Ashley Horton, John’s widow, said.

Channel 9′s Glenn Counts said he had the chance to speak with John’s brother James, who the family refers to as Nick.

He told Counts that he was taking one day at a time, and that he wouldn’t wish what he is going through on anyone.