Column: Is the Kern County sheriff an out-of-control cowboy — or a lost cause? 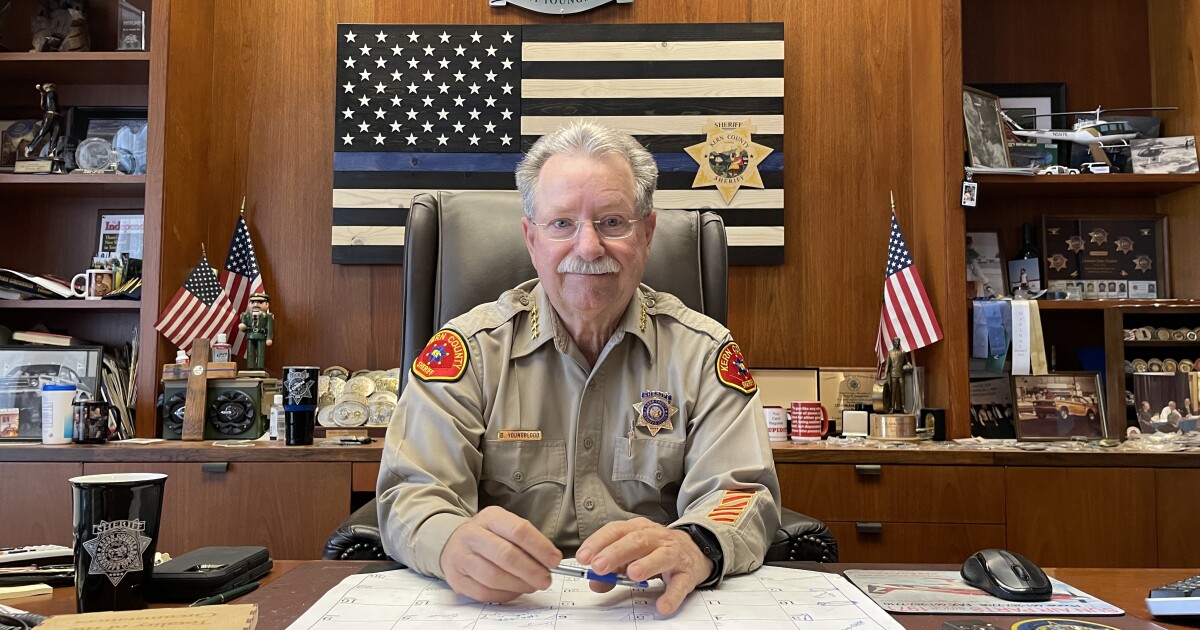 All my Bakersfield friends warned me before my interview with Kern County Sheriff Donny Youngblood that the guy was an out-of-control cowboy out of a Clint Eastwood Western.

Everything about my first few moments with the man seemed to confirm this.

His office is a massive room filled with dusty artifacts of Kern County law enforcement history and mementos from his 50-year career with the department. A giant framed photo of his quarter horse Harley is within eyesight of his formidable desk. Behind his chair is a wooden American flag with a blue stripe signifying Blue Lives Matter — cops matter too.

“The last time I had an L.A. Times reporter” in for a story, he said as we both hit “record” on our respective electronic devices, “she was wearing Wranglers and cowboy boots. I said, ‘Now I realize that you’re going to do a hit story on me, but you’re going to make me a hero in my county.’ … She was really a nice girl.”

Did I mention the Kern County Sheriff’s Department headquarters is two doors away from an evangelical church and down the street from a dive bar? Even “Blazing Saddles” didn’t have the cojones to make up details like that.

I visited Youngblood in late spring ahead of the June 7 primary to see how justice worked in one of the last strongholds of red California.

The Guardian deemed Kern County law enforcement “America’s deadliest police” back in 2015. That led to a 2020 settlement between Youngblood and the California Department of Justice that forced his agency “to begin the reform process that will benefit all Kern County residents,” according to then-Atty. Gen. Xavier Becerra.

Taxpayers have paid out more than $20 million in settlements for wrongful deaths, jailhouse strip searches and other assorted abuses involving Kern County deputies during Youngblood’s 15-year run as top lawman. Earlier this year, the American Civil Liberties Union blasted him and other sheriffs in the Central Valley for their “destructive” alliances with Immigration and Customs Enforcement.

Yet Youngblood ran unopposed this year for his fifth term, which makes him among the most senior sheriffs in all of California. In the 2018 election, the Kern County native not only walloped Justin Fleeman, his chief deputy, he then fired Fleeman for “dishonesty” and allegedly leaking confidential information during a campaign speech.

But in the course of our hourlong conversation, I didn’t see Youngblood as a malevolent good ol’ boy drunk on his own power like what my friends claimed. I saw a lost cause.

I saw a man who knows his time is up and the world has moved on — and against him.

“The world is changing,” Youngblood sighed early on in our chat. Of stocky build, with thin gray hair and a walrus mustache, he speaks in a tone more kindly neighbor than conspiracy-obsessed uncle.

The figure is actually 36% registered Republican — and Democrats are just two percentage points behind. Head for the hills, Ma Joad.

“It’s changed so dramatically,” he added a few minutes later. “The things that we used to shoot people for, we now cite them with a ticket. … That’s not a bad thing.”

But he was also surprisingly clear-eyed about the biggest issue his deputies face:

The Kern County Sheriff’s Department lifer said his team is severely understaffed at a time when they can’t afford to be. Last year, he asked school districts where his deputies had an on-campus presence to cancel their contracts because he needed to reassign them. Some of his substations can’t offer 24-hour coverage to the tiny communities they serve in a sprawling county.

He knows what the problem is — his department has a bad reputation. But he doesn’t put the blame on liberals for that. It’s the fault of the public employee unions that represent his employees, which fought him for years over raises, he said.

One of them, the Kern County Detention Officers Assn., released a video of Youngblood during the 2018 sheriff’s race that caught him telling an audience 12 years earlier that it was an “absolutely” better scenario to kill a suspect instead of cripple them in order to save taxpayers millions of dollars in settlements. The comments earned him nationwide scorn, and Youngblood told me the sentiment could’ve been “worded better.”

“When you spend 13 years as an association or a union telling your employees how bad it is to work here and spreading that word throughout the state of California, you can’t just turn that switch over the other way,” Youngblood complained. He allowed that Kern County has “some bad things. We have bad air quality and we have, you know, we have some negative stuff. But when you spread that narrative that this is a negative place to work and a negative county to live in, it’s hard to overcome that.”

His big push to recruit L.A. County sheriff‘s deputies who didn’t want to comply with COVID-19 vaccine mandates nabbed 10 applications. None had been hired at the time of our conversation.

“We want people with a clean background, not people that have a history of negative behavior,” the sheriff said.

That’s been the rub for Youngblood, though. By his own admission, he has fired between 75 and 100 deputies for misconduct. About seven years ago, he installed speedometer trackers on all patrol cars after two of his deputies struck and killed innocent bystanders in separate incidents while going over 80 miles per hour. Last month, a detentions deputy was arrested for being under the influence of and possessing meth.

Yet he insisted that his department’s 2020 settlement with the California Department of Justice vindicated him and his problematic deputies of their reputation as a lawless, murderous force.

“If I have an officer you believe has killed someone and violated their constitutional rights, why haven’t you indicted them?” he said he told investigators. “You have the absolute authority and responsibility to oversee the sheriff’s office. So why haven’t you done that?”

“I can’t speak for” Department of Justice investigators, Youngblood asserted a few minutes later, “but I think they realized that we weren’t as bad as they thought.”

Near the end of our conversation, I told Youngblood that he reminded me of Tommy Lee Jones’ character in “No Country for Old Men”: an old sheriff who knew he was in a different world and was ready to check out. Youngblood laughed off my assessment, but he was more interested when I asked about the biography of Tiburcio Vasquez that he kept with his Old West memorabilia.

The Californio robbed people up and down the state in the decades after the Mexican-American War before his hanging in 1875 for murder. White society deemed him a bad hombre; Vasquez saw himself as a revolutionary fighting an unjust system.

“I like a good bandit,” Youngblood said as we wrapped up our chat. “Some bandits are better than others. Their purpose for being a bandit can be, in their minds, justified. … Some bandits are in for themselves, but they’re so intriguing that they become almost a hero to you because they got away with stuff.”

One thought on “Column: Is the Kern County sheriff an out-of-control cowboy — or a lost cause?”