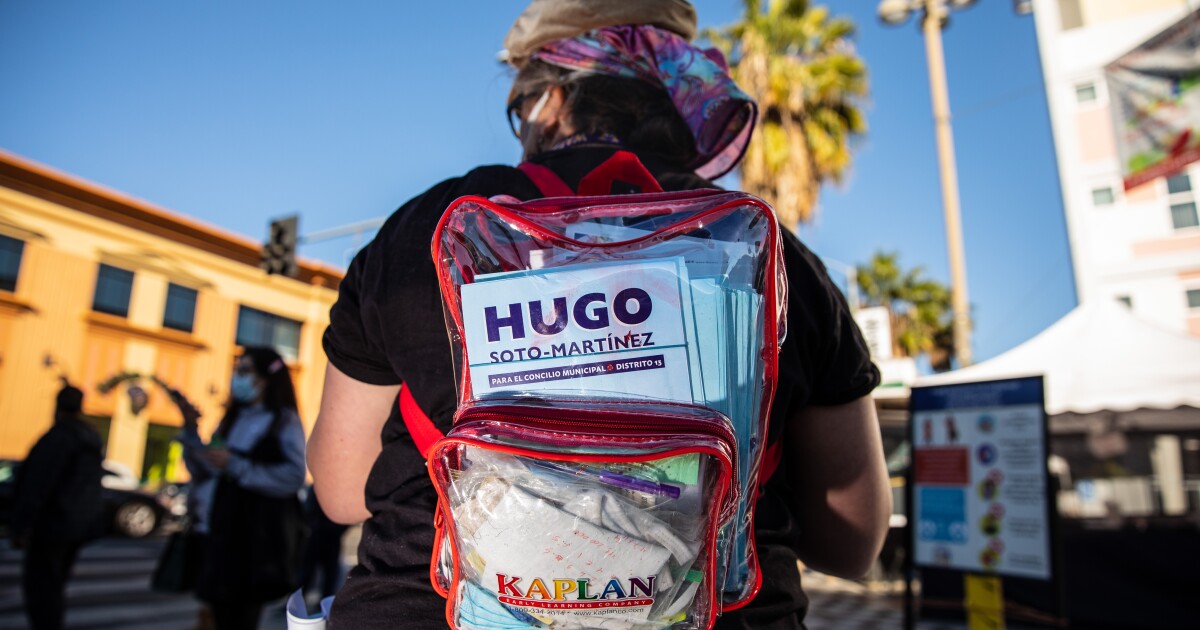 Los Angeles, after years of leftward tilt, is in the midst of a shift.

Further to the left.

The nation has been commandeered by the right, but Los Angeles is redefining what it means to be a progressive, as if Vermont Sen. Bernie Sanders has spawned a new strain of youthful resistance to old norms.

Cedillo was vanquished by community activist Eunisses Hernandez, who went at him from the left, with a platform that includes a call to get rid of the L.A. Police Department. Not scale it back, but abolish it, and plow all that money into addressing social and economic problems that drive crime.

On the Westside, which has been in a frenzy about crime and homelessness in and around Venice, the top primary vote-getter for City Council was not a hard-liner. It was attorney Erin Darling, who was endorsed by outgoing Councilman Mike Bonin, one of the city’s most liberal politicians.

In another race, Councilman Mitch O’Farrell — who is gay and Native American, and considered by some a liberal Democrat — was forced into a runoff with fewer votes than labor leader Hugo Soto-Martinez. The challenger, heralded as a “comrade” by the L.A. Chapter of the Democratic Socialists of America, told me he thinks O’Farrell badly mishandled the police-backed clearing of the Echo Park Lake homeless encampment and might as well be a Republican.

In the race for city controller, the leading vote-getter going into the November runoff is Kenneth Mejia, a former Green Party member who tweeted in the last presidential campaign that he wouldn’t waste his vote on Joe Biden, “a rapist & racist.” Mejia had nearly twice as many votes in the primary as Councilman Paul Koretz, who, as an old guard L.A. Democrat, is an endangered species.

In the race for mayor, mall mogul Rick Caruso seemed to have picked the right time to run a tough-on-crime campaign calling for more cops and clearing the streets of homelessness, because much of L.A. was worked up about both. But despite dumping $40 million into the cause, the former Republican trailed U.S. Rep. Karen Bass, a Democrat, by 7 percentage points in the primary.

And yet Bass, despite years of social justice and racial inclusion activism, has been under attack from the left. Gina Viola, a police abolitionist who grabbed 7% of the vote in her bid for mayor, told The Times’ Julia Wick that Bass won’t get the support of her backers without moving further left on policing and homelessness.

So what’s going on here?

There’s no short answer, and looks can be deceiving, especially in a primary election. Outcomes could flip in November.

It’s also worth noting that George Gascón, the very liberal L.A. County district attorney, faces a possible recall. And let’s not forget that in the city of Los Angeles, 7 out of 10 voters didn’t bother to cast a ballot, so we’re working with a small sample. I should also mention that for some who voted against Cedillo or O’Farrell, the motive was performance rather than politics.

Local lefty icon Jackie Goldberg, an L.A. Unified school board member and longtime public servant, thinks a wave with a left break is rolling across the city, but not a tsunami.

“There is a group of young people who, like young people in the ‘60s, are saying, ‘You guys call yourself progressives?’” Goldberg said. “They’re pushing to the left, but that’s not a majority of Democrats, by any means.”

But there’s no denying that a good number of engaged young voters are fed up with decades-long problems not getting fixed by veteran politicians. And no doubt that with a lot of groundwork and the benefits of social media, the new left is taking on the old left and the establishment.

Soto-Martinez, an admirer of Sanders, told me young people have coalesced around income inequality, racism, climate change, homelessness and the police brutality that gave rise to Black Lives Matter.

“All these movements coming together is what’s propelling this,” Soto-Martinez said.

The son of fruit vendors told me that when he was a Jordan High 10th-grader, a teacher laid out the essence of socialism and capitalism without using those labels, and asked students to choose one or the other.

“She described socialism as being more equal, with wages sort of same for everyone and less choice in consumer goods, but you all get treated evenly, with no meritocracy,” Soto-Martinez said.

He and all but two of the roughly 35 students lined up in the socialism corner, Soto-Martinez said. Under capitalism, he added, which worked for the entitled few, “people like us were getting screwed, and equal was good, because we were poor.”

Twenty years later, he said, the same barriers to college, healthcare and economic opportunity still exist. And although his parents were able to buy a house years ago on their income as vendors, homeownership is out of reach for many working people of his generation.

In fact, the majority of L.A.’s residents are renters, and a map of mayoral votes suggests that Bass dominated in neighborhoods heavy with renters, while Caruso prevailed in San Fernando neighborhoods dominated by homeowners. With rents rising and wages flat for many, the financial stress makes political change more attractive, especially to young people.

“The situation we were in as high school students is now felt by a broader group of people,” Soto-Martinez said.

The establishment is closely monitoring this awakening, and a bit weary of what one observer referred to as the absolutists.

For instance, you will come under attack on social media — I know from experience — if you consider the concerns of the housed as well as the needs of the unhoused, or suggest that it’s preferable to try and help homeless people into safe temporary quarters rather than watch them suffer, die and become victims of crime while waiting for permanent housing.

In a recent speech to the Los Angeles Current Affairs Forum, Councilman Paul Krekorian didn’t mince words when he got to the topic of homelessness, which has made him a punching bag for the far left.

“Like so many other issues, this has become so demagogued,” Krekorian said, as reported by L.A. Magazine’s Jon Regardie. “Anybody in public life now has to choose — either you support the homeless, which means anything goes and you can live anywhere you want and there’s never going to be any restrictions on what you do. Or if you don’t have that position, apparently you just believe in criminalizing homelessness. That’s an absurd, false choice.”

Krekorian told me his speech was largely about politics at the national and local levels being driven more by the far right and the far left, with too many people sitting on the sidelines.

“Abolishing the police is not something most people in Los Angeles agree with,” he told me.

Probably not, although most people probably wouldn’t mind seeing some fresh blood and new ideas on the City Council. And building a bigger tent is fine, said Mark Gonzalez, chair of the L.A. County Democratic Party — which endorsed Cedillo and O’Farrell. But he, too, feels the sting of young critics on his left flank who “like to paint me as establishment because I’m in this role.”

Gonzalez, a youngster himself at 37, says he’s been working since the age of 16 on numerous progressive reforms. He said he’s prepared to ally with the new activists-turned-politicos on shared goals. But he said there’s been a tendency on the part of some members of the socialist movement to be disruptive rather than constructive.

Goldberg said she adores the spirit of the local chapter of socialists and considers herself a comrade, but she hopes they don’t go too far. Abolishing the police is not the right message at the moment, she said. Better to stick with police reform and more investment in all the issues that give rise to crime, which is why she’s a wholehearted supporter of Bass.

“If they were to decide to not support Karen in the runoff, it would be disastrous — a complete disaster — and we will never forgive them if they cause her to lose,” Goldberg said. “Secondly, if they do that, they will take themselves out of the game in Los Angeles.”

Wise counsel, from one generation to the next.

But when have aggrieved, idealistic youngsters, fueled by the spirit of rebellion and the scent of victory, ever listened to their elders?