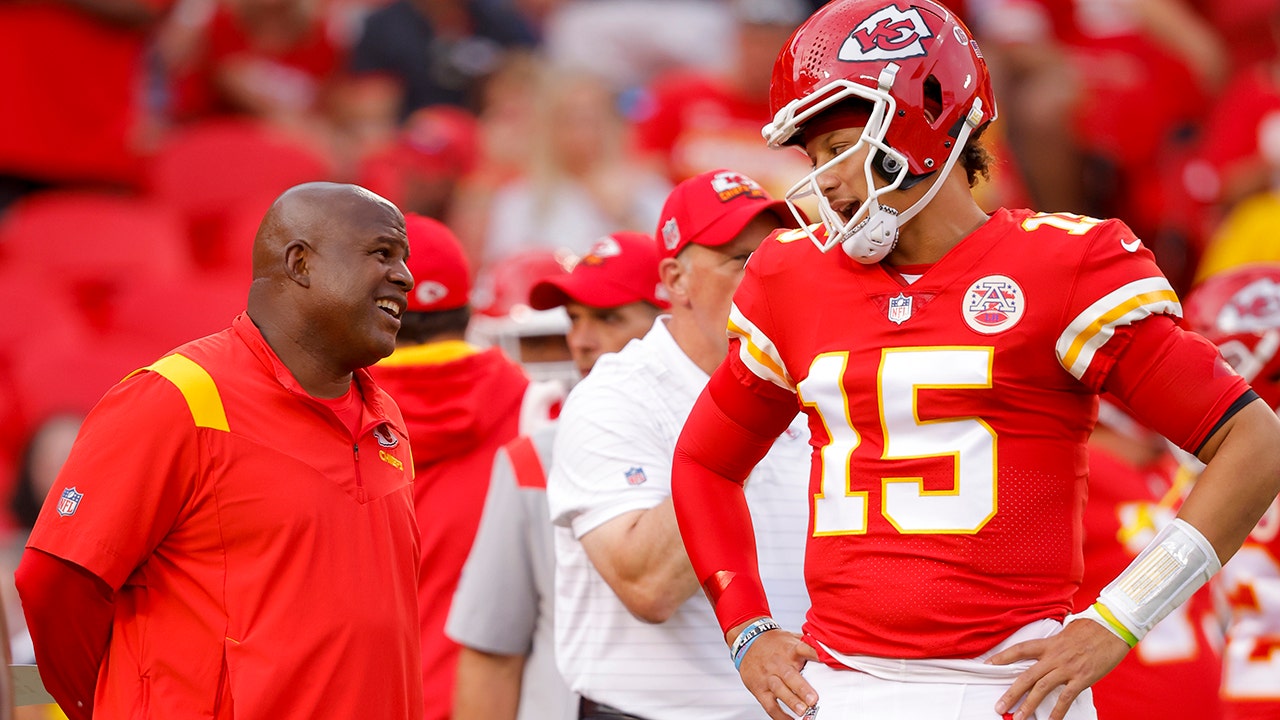 The incident occurred right before halftime during the Chiefs’ loss to the Indianapolis Colts 20-17. Mahomes appeared on Audacy’s 610 Sports Radio and reiterated he just wanted to try for a score.

“After seeing the video, I see why people thought it was a bigger deal than it actually was. As an offensive player and someone that wants to score every single time you’re on the field, I wanted to take a chance to get it down the field,” Mahomes said on “The Drive.” “They made the decision, not just coach Beiniemy, I think it was Coach Reid and the whole offensive staff that we were in a good spot. … We didn’t want to make a big mistake there at the half.

“That’s their job, and I have to be better at knowing when that is the right decision, but at the same time I always want to score, that’s just who I am. … Sometimes there’s a little disagreement here or there, but we know we’re trying to do whatever we can to win. … We got to the locker room and we started talking, it was like it didn’t even happen.”

“I don’t think the camera probably showed the reality. EB was just communicating, calm saying, ‘Listen we’ll get it in the second half here.’ He was explaining the situation to him. Patrick — listen — Patrick — and this is what makes him great — is he wants to rip your heart out on every play and every opportunity he gets, and he had taken a pretty good lick the play before and so my decision was to do that,” Reid said.

“You know, it wasn’t EB. EB was just the calming effect there. Sometimes things look different. Listen, it’s an emotional game. It’s an emotional game. I wouldn’t want it any other way. That’s what makes it great! And so that’s why we all love Pat. He wants to play. There are guys that’ll shy away from that right there and say, ‘Hey let’s just take it in and go the other direction.’ He wants to get in there and go. But that’s where I come in, and I’ve got to make sure that I do what I think is best, and Pat explained it I thought very well yesterday. And let’s not change Pat Mahomes man, let’s not change that or EB for that matter. Let’s not change that. Those are two great men right there.”

Mahomes was 20-for-35 with 262 passing yards and a first-half touchdown pass to Travis Kelce. Mahomes led the team with 26 rushing yards too. Kelce had four catches for 58 yards. J.J. Smith-Schuster had five catches for 89 yards.

Kansas City Chiefs offensive coordinator Eric Bieniemy speaks with Patrick Mahomes #15 of the Kansas City Chiefs during pregame warmups prior to the game against the Los Angeles Chargers at Arrowhead Stadium on Sept. 15, 2022 in Kansas City, Missouri.
(David Eulitt/Getty Images)