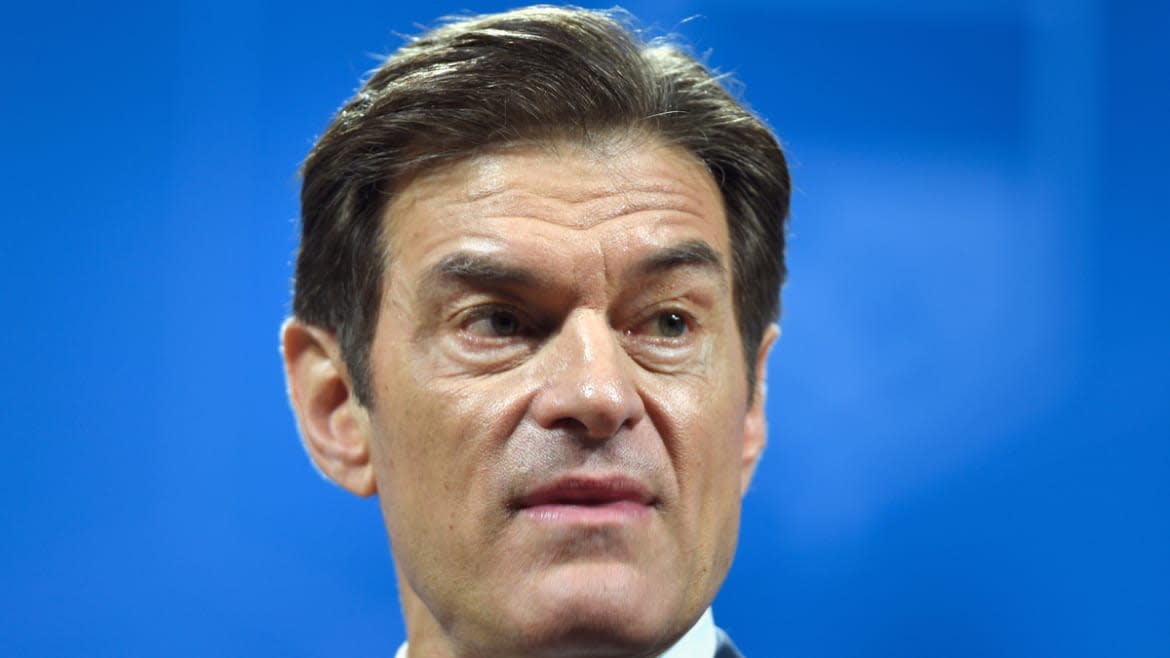 The acclaimed teaching hospital, where Oz held senior positions like vice chair of surgery and director of integrated medicine for years, stripped his personal pages from their website in mid-January.

The move came a day after HuffPost reported on Jan. 12 that Columbia had established a new distance from Oz, changing his title to “professor emeritus.” The truth, however, was that Columbia had made that change years ago, as HuffPost later clarified in an updated version of its article.

But what HuffPost seemed to get wrong actually set off a chain of events, ironically, making the post right—albeit a day too early.

The next day, on Jan. 13, as a Columbia page documenting website modifications shows, the university removed Oz’s profile from the site and disconnected hyperlinks to that bio on a number of pages that mention Oz. (One page was modified on Friday, shortly after The Daily Beast emailed a communications official for comment.)

His name no longer appears in website searches for doctors with the school’s Irving Medical Center. A Columbia faculty listing still says Oz has an office, along with the role of special lecturer—though not “professor emeritus.” But as with a handful of other names on the list, Oz’s listing no longer links to his faculty page, as it did one week before he launched his campaign. (Nearly every other faculty member without a link is no longer affiliated with the medical center; one of them died last year.)

The outgoing message on Oz’s voicemail for the listed number is quite dated, directing callers to medical services when Oz stopped taking patients four years ago. The message also advertises audience tickets to his now-extinct daytime TV show.

Columbia’s affiliation with Oz had been under fire long before he launched a surprise Senate run in late November. In 2015, when Oz testified before the Senate about his endorsement of shady “miracle” cures, a group of some of the country’s top medical professionals sent Columbia a blistering letter demanding the renowned medical school fire the Oprah-blessed daytime star.

“Dr. Oz has repeatedly shown disdain for science and for evidence-based medicine, as well as baseless and relentless opposition to the genetic engineering of food crops,” the physicians wrote. “Worst of all, he has manifested an egregious lack of integrity by promoting quack treatments and cures in the interest of personal financial gain.”

“Their handling of his status there is a massive blot on their reputation. What a chickenshit thing to do,” Summers told The Daily Beast.

Fainthearted as it may seem, Columbia’s move did wipe its public connection with Oz. And that, Summers observed, is more than can be said for an arguably more influential cultural institution: Talk show legend Oprah Winfrey.

The Backlash Over Trump’s Dr. Oz Endorsement Shows His Hold on the GOP Is Slipping

“Were it not for Oprah, Oz would have played out his career as an eminent and widely respected cardiothoracic surgeon, and everyone would have been better off,” he said. “His celebrity, and thus his candidacy, stems directly from her own fame and her promotion of him.”

As Oz “continues to debase himself” in pursuit of the GOP nomination in Pennsylvania, Summers said, it is “long past time for her to acknowledge her role in making him what he is, and make some attempt to stop the damage he is causing by repudiating him.”

At one time a distinguished thoracic surgeon, Oz long ago morphed into a controversial public figure—largely on Oprah’s watch.

He parlayed Oprah’s endorsement and his guest appearances on her show into his own daytime program, where he built a multimillion-dollar brand as a celebrity doctor. And this year, he parlayed that success into another endorsement—from ex-President Donald Trump, who earlier this month backed Oz’s Senate bid in Pennsylvania.

Along the way, however, Oz drew criticism from the medical community, including accusations of “quackery” for espousing false claims about genetically modified foods and pushing “sham” weight-loss supplements to fatten his own wallet.

“‘You may think magic is make-believe, but this little bean has scientists saying they’ve found the magic weight-loss cure for every body type,” Oz said in a 2012 episode of his show. The secret: “It’s green coffee extract.’”

Three years later, that exact quote was thrown back in his face when he answered to the Senate for hawking that product, among a number of spurious “miracles.”

Oz didn’t do much actual answering in that hearing, however. His evasiveness flustered Sen. Claire McCaskill (D-MO), chair of the Senate Subcommittee on Consumer Protection, Product Safety and Insurance.

“I’ve tried to do a lot of research in preparation for this trial and the scientific community is almost monolithic against you,” McCaskill said.

As the COVID pandemic descended in spring 2020, Oz went on cable news to stump for hydroxychloroquine, an unproven and occasionally dangerous treatment that became one of then-President Trump’s favorite fixations.

The Daily Beast reported that, between March 24 and April 5, the physician appeared on Fox News 21 times, including at a virtual forum where he pumped up hydroxychloroquine and spoke with Trump and Vice President Mike Pence. He also advised White House officials, reportedly at Trump’s personal request.

In late March of that year, he revealed on Fox & Friends his involvement with a hydroxychloroquine trial.

“My biggest challenge was getting pills, and we finally, thankfully got enough to do a trial and a couple of hundred people, but America is going to want pills,” he said.

Earlier this month, The New York Post reported that Oz had purchased, out of pocket, 2,070 doses of the anti-malarial drug to contribute to that unnamed study. A campaign spokesperson told the outlet that Oz had initially offered $250,000 to fund Columbia University’s clinical trial, but after his own employer rejected the proposal, Oz said he gave the pills to a hospital he would not name.

Oz cited the pandemic as his motivation to run for office, writing in his op-ed announcement that a large number of COVID deaths in the United States—more than 750,000 at the time—had been “preventable.”

“Dissenting opinions from leading scholars were ridiculed and canceled so their ideas could not be disseminated,” Oz wrote, blaming the government for instituting policies that had “caused unnecessary suffering.”

Two and a half years prior, Oz suggested on Fox News in the middle of the pandemic’s first wave that a 2-3 percent bump in national COVID mortality might be an acceptable trade for reopening all U.S. schools.

The Daily Beast reached out to the Oz campaign, Columbia University, and Oprah, but did not receive a response.