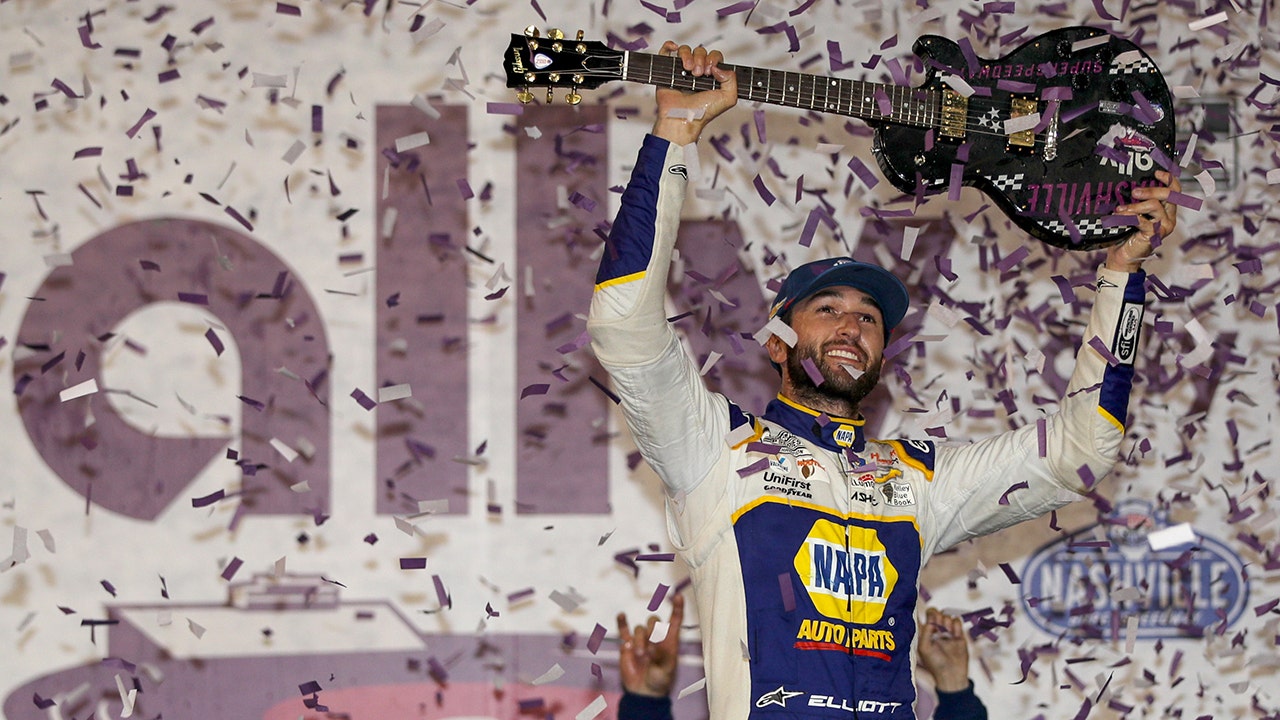 Chase Elliott salvaged a crummy day for Hendrick Motorsports and interrupted a potential Toyota rout by winning the rain-drenched race at Nashville Superspeedway on Sunday night.

Elliott recovered from an early issue that dropped him deep into the field to take the lead with 38 laps remaining and hold off three Joe Gibbs Racing drivers for his second Cup victory of the season.

It took NASCAR’s most popular driver nearly seven hours and a late four-lap shootout to get to victory lane. NASCAR moved the start up by 12 minutes because of looming bad weather, then sat through an hour-long stoppage for lightning in the area, followed by a later rain delay that stretched a tick past two hours.

“So proud of our team,” Elliott said. “We had kind of a setback there about halfway and was able to get the Chevy dialed back in and get back in the mix. It was a long day, fun day.”

The race resumed right at the halfway point with teams unsure if the full 300 laps would be completed or if the race would be stopped early because of more rain. Toyota controlled almost the entire event — four of its drivers combined to lead 253 laps — but the No. 5 Hendrick crew brought Elliott’s Chevrolet to life in the closing stretch.

“We were `(The) Bad News Bears’ to start, and then at the end we got it right and were really good,” crew chief Alan Gustafson said.

He had the race in hand when a caution came out with nine laps remaining and Elliott didn’t pit from the lead for fresh tires. Nine other drivers stayed on track with him to create a pack of traffic that prevented the Toyotas from catching Elliott after they stopped for fresh tires.

“I figured it was coming. I was hoping not,” Elliott said about the caution. He led two times for 42 laps. But he pulled away on the restart and beat Kurt Busch — in a Toyota for 23XI Racing — by 0.551 seconds.

“Getting a win is always huge. To do it in a really cool city like Nashville is even better. Looking forward to that guitar,” Elliott said about Nashville’s traditional winner’s trophy.

“These things are hard to come by and you have to enjoy them. You never know when or if ever you will get another one. So, super thankful and looking forward to next week.”

Elliott’s other win this season was at Dover, which like Nashville is a concrete track.

Busch, who led three laps for Toyota, said he should have been harder on Elliott on the final restart.

“I got soft on him. I should have been throwing some fenders and moving some momentum around,” said Busch. “I just needed to stick with our strength and I messed up. The way that we’re running, a second is cool, but we’re here for wins.”

Ryan Blaney was third in a Ford and followed by Elliott’s teammate Kyle Larson, the defending race winner. The JGR trio of Denny Hamlin, Kyle Busch and Martin Truex Jr. fell to sixth, 21st and 22nd after the late decision to stop for tires ahead of the final restart.

The race went bad for Hendrick Motorsports in a two-lap sequence shortly after it resumed following the early lightning delay.

William Byron headed to the garage with a broken steering rack on his Chevrolet minutes after the race resumed, and one lap later, Alex Bowman suffered severe damage when contact with Corey LaJoie caused him to spin.

Bowman derided LaJoie’s talent on his team radio, while LaJoie asked his team to apologize to Bowman on his behalf. During a lengthy rain delay hours later, LaJoie posted to Twitter a T-shirt design that said “Really Good Race Car Driver” to mimic Bowman’s insult.

But the damage was done for Bowman, who is sponsored by Ally, which has heavily invested in NASCAR’s return to the Nashville market. The company is the entitlement sponsor for the Cup race and heavily activated at several downtown Nashville tourist spots.

NASCAR CLASH AT THE L.A. COLISEUM RETURNING IN 2023

Bowman had returned to the event hoping to improve on last year’s 14th-place finish — which he found unacceptable because of Ally’s significant presence at the speedway. He finished last in the 36-car field.

Bubba Wallace lost his temper with his 23XI Racing crew when he had to pit from sixth-place because of a loose wheel. He cursed his crew, then said he didn’t want to talk to them the rest of the race.

Crew chief Bootie Barker tried to calm his driver, who has been all over the map at Nashville. He was fastest in Friday practice but then qualifed 30th with team co-owner michael Jordan watching from pit road.

Wallace restarted 31st, the last car on the lead lap. He rallied to finish 12th.

NASCAR’s Cup Series races on the Road America road course in Wisconsin for just the third time. Elliott is the defending champion.