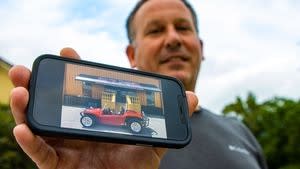 For years, a nagging thought kept coming across Jeff Szak’s mind: would the men who sold his car ever face charges for running off with his money?

This month, his questions were answered.

WFTV’s Action 9 team has circled back to the drama surrounding Just Toys Classic Cars and its owners, Mike and J.R. Smith, after more and more customers came forward, each telling the same story.

They brought their classic, often expensive cars to Just Toys to be sold, signing contracts promising payments in 60 days. They said the deadline came and went – and no money followed. Some cars outright disappeared, sold to buyers outside the United States where the trail was harder to follow.

Authorities shut down Just Toys in 2019, three years after they said the first known theft happened, but the Smiths were allowed to keep living their lives. Behind the scenes, mountains of evidence piled up.

Both father and son were arrested and charged with Grand Theft in early April. Detectives said they stole money from 20 different customers over a three-year period. Some of the evidence came from Smith’s own employees.

“It’s finally relief, not only for me, but the other people in the case,” Szak said, calling it a long and frustrating road.

Both men were released after paying $5,000 bonds, but the future may be severe: if found guilty, first-degree Grand Theft carries a maximum sentence of 30 years in prison. It’s not the only charge they’re facing, either.

Szak said he’d be interested to testify in the case, echoing some of the other alleged victims Eyewitness News followed up with. He didn’t know if he’d ever see the $14,000 he was owed, a small amount compared to the other cars in the case.

READ: Student loan debt: What is Biden considering when it comes to loan forgiveness?

“People actually sold the car that they had forever, knowing that this was going to be the car that was hopefully going to help them live the life they wanted in retirement,” he explained. “That’s what frustrated me the most out of the whole situation.”

WFTV stopped by the business’ old location, but no one was there. Neither man had an attorney listed on his court paperwork.