Can Robots Save Nursing Homes? 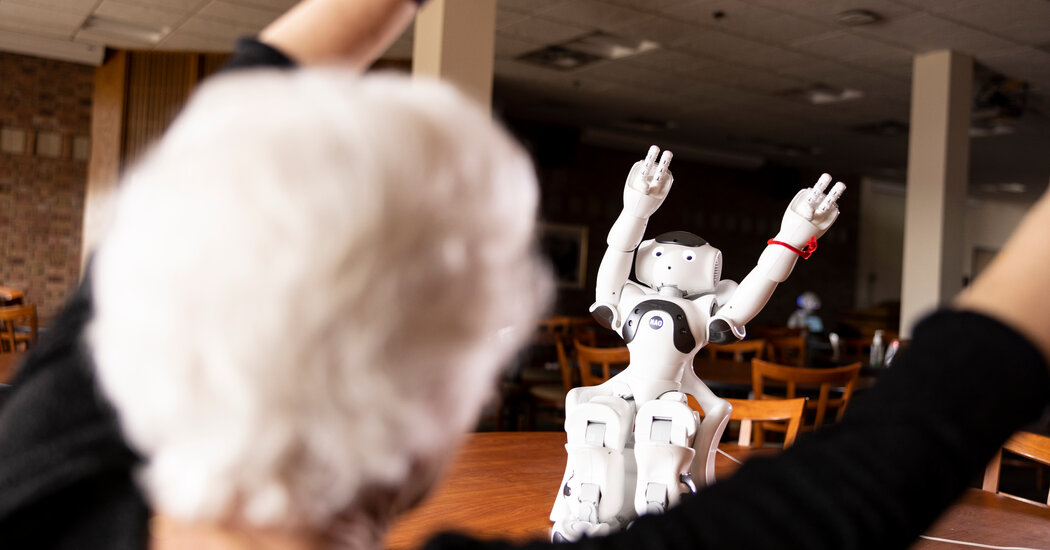 Even in Dr. Khan’s lab on this March day, a techno-future where robots serve many human needs seemed tantalizing, but still far away. Robots suddenly started talking unprompted, or crashed in mid-program. They seemed remarkably human one minute, maintaining eye contact and leaning into conversation, but in the next they spoke over any attempts to go off-script, lacking the functional agility of Apple’s Siri or Amazon’s Alexa. When one of the small robots fell demonstrating yoga poses, sometimes it could right itself, sometimes not.

On the plus side, unlike human workers, robots never get in a bad mood or tire of having to repeat themselves.

For Monarch, the robots’ limitations are not the point. Like other nursing home systems, Monarch has been struggling with severe labor shortages since the pandemic. Marc Halpern, the chief executive of Monarch, said the company “1,000 percent” did not intend to replace workers with robots. “But if these robots can help us fill in gaps to help meet the needs of the residents, that’s what we’re looking for.”

At RiverWoods Durham, a continuing care community in Durham, New Hampshire, a canister-shaped robot called Servi, from Bear Robotics in Silicon Valley, carries food from the kitchen to the dining area, and buses dishes from the tables back to the kitchen. The residents named it Rosie, after the robot on “The Jetsons.”

Kim Gaskell, the executive director, said she hoped the robot could someday reduce staffing needs by one worker per shift. But mainly, she said, the residents like it. “Now when grandchildren are visiting, they say, ‘Look, we have a robot,’” she said.

Residents at Covenant Living of Cromwell, in Cromwell, Conn., were getting their first look at Servi in late March. They called theirs Rover. It has two trays for carrying dishes, and sensors to keep it from bumping into people. When a reporter stepped into its path, it stopped and found a different route.

At a table in the dining room, Janet and Bill Carlson, both in their 80s, watched the empty robot glide around the room. “I think he’s kind of cute,” Ms. Carlson said. The other night at dinner, she said, the robot kept walking behind her husband and saying thank you. “And Bill kept saying, ‘You’re welcome.’ I said, ‘Bill, I don’t think we have to answer.’”