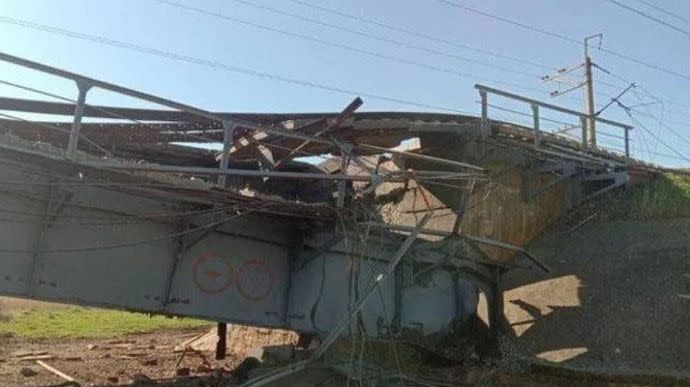 OLENA ROSHCHINA – THURSDAY, 28 APRIL 2022, 15:36 A railway bridge that the Russian military have been using to deliver weapons and fuel from occupied Crimea has been blown up in Yakymivka, Melitopol district, Zaporizhzhia Region, according to local media reports. Source: RIA Melitopol Details: At around 8 am on 28 April, there was a powerful explosion in Yakymivka which was heard not only in the surrounding villages, but also in Melitopol. According to available information, the railway bridge which the occupiers have been using to deliver weapons and fuel from occupied Crimea had been blown up. Locals said the Russians “started panicking”: they surrounded the bridge and began to check all passing cars. The occupiers are also searching the houses of local residents in the village of Volodymyrivka and looking for saboteurs. The Russians are trying to “calm the people of Yakymivka down”, claiming that they set off the explosion when they were demining the rails. The person who did the “planting” [of the explosive] is wanted. RIA Melitopol happened to have a video of the destroyed bridge, and it also published a photo. The news agency emphasised that this bridge is the only railway connection with occupied Crimea. Yakymivka is under Russian occupation, as are Henichesk, Melitopol and Berdiansk.