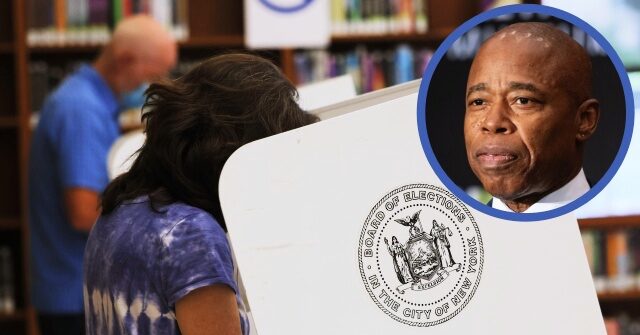 A handful of black Americans, residing in New York City, have filed a federal lawsuit against the city’s Board of Elections for a local law that would allow nearly a million foreign nationals to vote in citywide elections.

As Breitbart News has chronicled, Democrats on the 51-member New York City Council approved a plan last month that allows more than 800,000 foreign nationals with green cards, visas, and work permits the opportunity to vote in citywide elections so long as they have resided in the city for at least 30 consecutive days.

Four black Americans — Phyllis Coachman, Deroy Murdock, Katherine James, and Anthony Gilhuys — represented by the Public Interest Legal Foundation (PILF) have now filed a lawsuit in federal court that mimics their lawsuit filed in New York state which challenges the law on the grounds that it violates the 15th Amendment and the Voting Rights Act.

Racial discrimination, the latest lawsuit alleges, is behind the New York City law as it seeks to dilute the votes of black Americans by adding hundreds of thousands of Hispanic and Asian immigrants to the voting rolls.

According to data from the 2020 American Community Survey of the United States Census, there are approximately 1,300,000 foreign nationals residing in Bronx, Kings, New York and Queens Counties. Of that total, approximately 495,000 are Hispanic and 348,000 are Asian. [Emphasis added]

New York City has approximately five million active registered voters. The addition of approximately one million foreign-citizen voters could potentially make up almost 20 percent or more of the electorate in future New York City elections. This is greater than the margin of victory in many municipal elections. [Emphasis added]

The lawsuit cites former Councilmember Ydanis Rodriguez (D) as “consistently” advocating for the law “with an explicit racial purpose.”

“Throughout the September 20, 2021, New York City Council public hearing, Council Member Rodriguez spoke in favor of the Bill in racial terms … many of his statements referred to the race of the foreign citizens who would be granted municipal voting rights,” the lawsuit states.

In June, the New York Supreme Court struck down the law as “illegal, null, and void” because “it is clear … that voting is a right granted to citizens of the United States” after the New York Republican Party filed suit in the state.

The federal lawsuit brought by black Americans is the third to challenge the law but the first that asks the federal courts to intervene in blocking its implementation.

John Binder is a reporter for Breitbart News. Email him at jbinder@breitbart.com. Follow him on Twitter here.