Biden’s focus on Europe over China puts Taiwan in danger 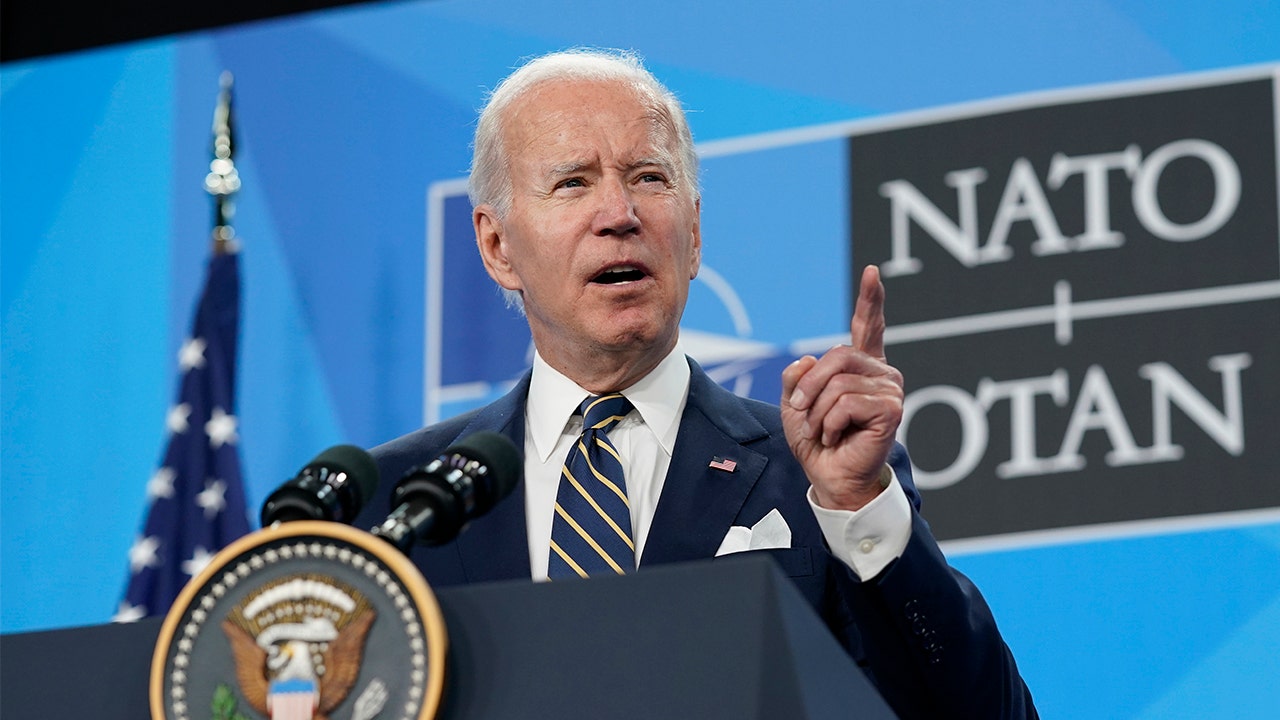 On June 29, in Madrid at NATO’s annual summit, President Joe Biden announced a shift of additional land, sea and air military units to Europe to counter Russian aggression – at the exact time he should be preparing for and deterring the next war: China’s invasion of Taiwan.

Only 10 days later, on July 8, several Chinese warplanes conducted a rare crossing over the “centerline” in the northern portion of the Taiwan Strait – the 90-mile-wide midway point between China and Taiwan. That U.S. Sen. Rick Scott, R-Fla., a member of Senate Armed Services Committee, was in Taipei at the time, served as a pointed reminder that hostilities could erupt in the region suddenly and at a time of China’s choosing.

President Biden speaks during a news conference on the final day of the NATO summit in Madrid, Thursday, June 30, 2022.
(AP Photo/Susan Walsh)

BIDEN’S MILITARY RECRUITING CRISIS A DEMON OF ITS OWN DESIGN

First, it is in America’s national security interests that Ukraine remain a free and independent nation. That said, properly supported, Ukraine will not be conquered by Russia. And, if Ukraine continues to successfully resist, then Russian President Vladimir Putin’s threat to NATO and Europe at large is minimized – his military forces are having enough trouble with Ukraine. Taking on the United Kingdom, Poland, Germany, or other well-equipped NATO powers would end in a humiliating defeat.

Further, as Putin’s invasion of Ukraine grinds on, Europe has come together. NATO is on the verge of doubling the frontage that Russia must cover with the addition of Finland and Sweden to the defensive pact. Plus, NATO nations are further boosting their defense spending after the $50 billion increase due largely to former President Donald Trump’s encouragement.

NATO MAKES THE RIGHT CALL ON SWEDEN, FINLAND IN A BIG, BOLD MOVE

But a significant buildup of American forces, including a new permanent headquarters for U.S. 5th Army Corps in Poland, an additional combat brigade to Romania, two additional F-35 squadrons to the U.K., more deployments to the Baltic states, two additional Navy destroyers to Spain, and additional air defense assets to Germany and Italy will likely allow Europe to relax and let America carry the defense burden once again.

Second, America’s defense posture is beginning to atrophy. All services are having difficulty meeting recruiting targets. The defense supply chain is in serious trouble – for instance, resupplying the 5,500 Javelin missiles sent to Ukraine will take more than three years. The Navy struggles to build more than four combat vessels per year. And hundreds of combat aircraft can’t carry out their assigned missions due to age, a lack of spare parts, and maintenance.

And lastly, with a force growing less capable by the day, we must prioritize. Europe is important, but Europe is wealthy and more than capable of defending itself against an aggressive but far from dominant Russian military.

Comparatively speaking, the Indo-Pacific arena is far more critical to American national security interests than is Europe. Based on purchasing power parity, the People’s Republic of China is the world’s largest economy, followed by the U.S. and then the European Union. But India, Japan, the 10-member Association of Southeast Asian Nations (ASEAN) grouping in Southeast Asia, Australia, South Korea, and Taiwan have 12% more economic output than China, and 43% more than the European Union.

And unlike Russia, China is militarily and economically ascendant. The People’s Liberation Army Navy just launched its third aircraft carrier – its most advanced one yet – with no plans to slow its naval buildup. China will boost its navy from 355 warships to 420 in the next four years, launching some 16 ships per year to America’s four. At some point, the U.S. Navy’s expected qualitative advantage could be overrun by Chinese numbers. China is also rapidly expanding its nuclear arsenal.

Weather conditions across the Taiwan Strait become less adverse to an amphibious assault two times every year, in the spring and in October. Biden’s shift of ships, aircraft and air defense batteries to Europe can still be rebalanced by an enhanced commitment to the Pacific before October. To ignore China at this juncture is to invite a war on Taiwan that will prove far more destructive than Russia’s war on Ukraine – and will likely involve American combat forces at the onset.

Chuck DeVore is a vice president with the Texas Public Policy Foundation and served in the California legislature for six years.