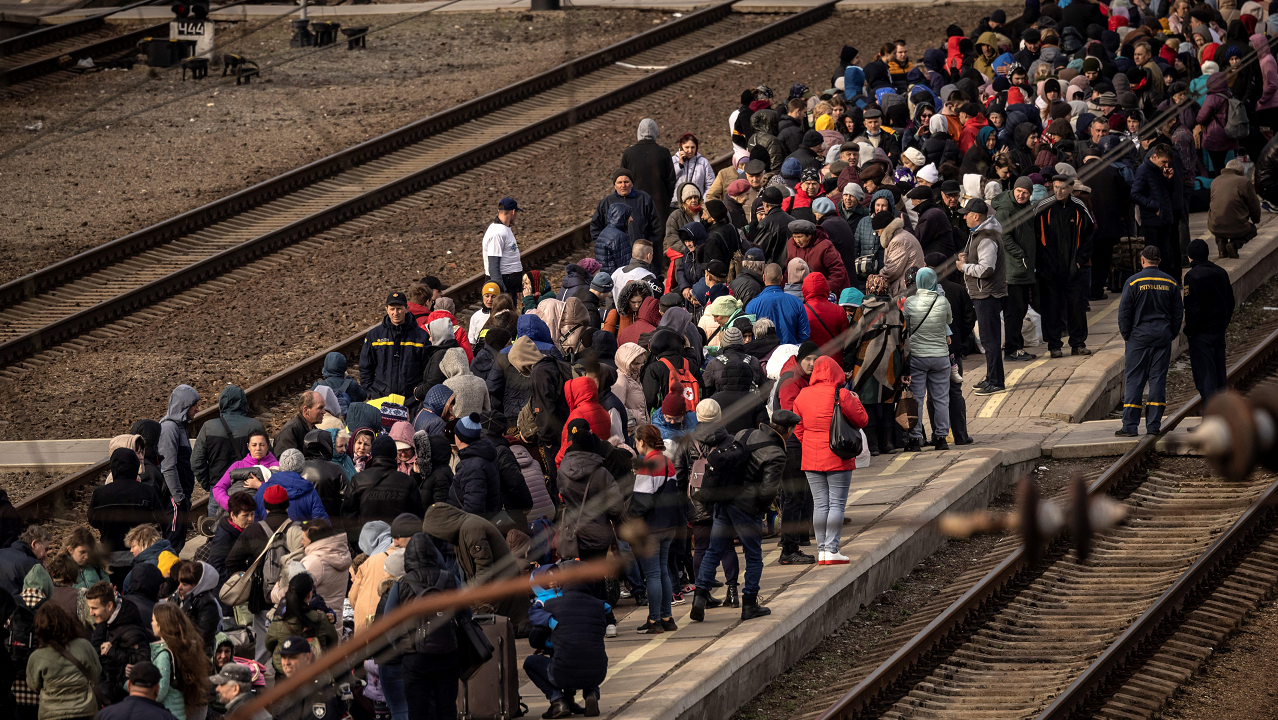 The Biden administration will next week introduce a streamlined program for Ukrainian nationals who wish to seek humanitarian parole in the U.S. — at the same time as it ends an exemption to Title 42 for Ukrainians arriving via the southern border.

Starting Monday, “Uniting for Ukraine” will allow U.S. residents and organizations to apply to the Department of Homeland Security to sponsor Ukrainians who have been displaced due to Russia’s invasion. It will allow sponsored Ukrainians, who fulfill public health requirements and pass biometric and other security checks to travel to the U.S. and be considered for parole for up to two years in a streamlines process — where they will be able to apply for work permits.

Families wait to board a train at Kramatorsk central station as they flee the eastern city of Kramatorsk, in the Donbas region, in early April.
(Photo by FADEL SENNA/AFP via Getty Images)

President Biden has pledged to bring 100,000 Ukrainians to the U.S. A senior administration official said in a call with reporters Thursday that currently the U.S. has brought in approximately 15,000 Ukrainians in the last three months, mainly via the southern border and that the administration expects that the majority of the 100,000 will come in via the new program. Officials said it is designed for Ukrainians who already have ties in the United States and are therefore able to identify a sponsor.

“We are proud to deliver on President Biden’s commitment to welcome 100,000 Ukrainians and others fleeing Russian aggression to the United States,” DHS Secretary Alejandro Mayorkas said in a statement. “The Ukrainian people continue to suffer immense tragedy and loss as a result of [Russian President Vladimir] Putin’s unprovoked and unjustified attack on their country.”

“DHS will continue to provide relief to the Ukrainian people, while supporting our European allies who have shouldered so much as the result of Russia’s brutal invasion of Ukraine,” he said.

The Biden administration issued a memo in March telling Customs and Border Protection (CBP) staff that it can exempt Ukrainian nationals from the Title 42 public health order, which requires migrants arriving at the southern border without a visa or pre-authorization to be rapidly expelled due to the COVID-19 pandemic.

“CBP is authorized, consistent with the Title 42 Order, on a case-by-case basis based on the totality of the circumstances, including considerations of humanitarian interests, to except Ukrainian nationals at land border ports of entry from Title 42,” the memo, reported by CBS News, said.

The number of Ukrainians arriving at the border has shot up in recent weeks, with 3,274 arriving in March, up from 272 in February. However, the administration says that following the introduction of the “Uniting for Ukraine” program, Ukrainians coming without authorization will be denied entry and instead be referred to apply through the program.

A senior DHS official confirmed that as of April 25, “we will apply Title 42 equally to all nationalities at the border and Ukrainian nationals who present and do not have a visa or have not gone through the ‘Uniting for Ukraine’ program will no longer be paroled in unless they have some other factor that would lead a border official…to make a case-by-case determination that they do merit a humanitarian exception from Title 42 for a different reason.”

The official also said there would be no preferential treatment under “Uniting for Ukraine” for Ukrainians who arrive at the southern border.

Separately, the State Department said it will expand U.S. resettlement operations in Europe to provide more resources to process Ukrainians for refugee resettlement, and that European embassies and consulates are expanding the number of visa appointments, and making expedited visa programs for those with humanitarian or other extraordinary circumstances.

The Biden administration is on track to end Title 42 entirely, which has been used to remove a majority of migrants arriving at the border since March 2020, on May 23. However that move has sparked considerable backlash from Republicans, as well as some moderate Democrats, amid fears of a broader surge of migrants at the southern border. Axios reported this week that the White House is considering delaying that order. Meanwhile, Republican states have sued in a bid to stop the lifting of the program.