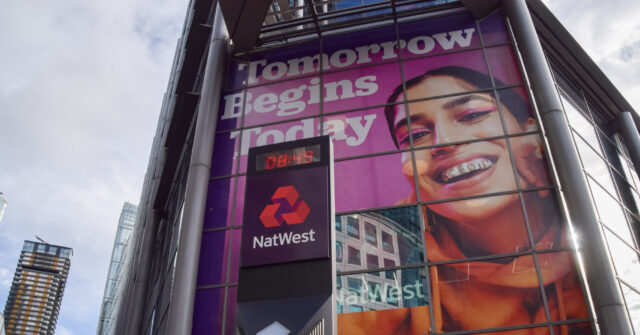 NatWest, a private bank bailed out by the taxpayer in 2008, has announced it will start blowing money funding transgender hormone therapy and other treatments for its staff.

Still 48.1 per cent owned by the public, NatWest has become something of an albatross around the taxpayer’s neck, with the government gradually selling off the shares it acquired in the banking corporation — then known as the Royal Bank of Scotland (RBS) — after bailing it out to the tune of  £45 billion in 2008, but expected to end up making a “huge loss” of “at least £26 billion” by the time it has fully divested.

Nevertheless, NatWest’s leadership do not seem at all shamefaced about making questionable spending decisions, most recently by announcing that it will fund transgender hormone therapy already available through the socialised National Health Service (NHS) for its staff.

This follows similar moves seemingly driven by identity politics — for example, introducing “dual-sided work passes that allow non-binary colleagues to present in masculine and feminine expression” depending on what they feel like being at a particular time, and introducing the woke “Mx” prefix for customers alongside the more traditional Mr and Mrs and the proto-woke “Ms”.

NatWest also pioneered the introduction of so-called pronoun badges — made from bamboo to fight climate change — letting customers know whether staff should be referred to as he/him, she/her, they/them, some combination of the three, or some even more outlandish alternative.

Infamously, their lead was subsequently followed by Halifax — also once bailed out by the taxpayer — who told customers not on board with the woke agenda that they could take their business elsewhere.

“We strive for inclusion, equality and, quite simply, in doing what’s right,” the banking corporation haughtily declared on its official Twitter account.

“If you disagree with our values, you’re welcome to close your account,” they added.