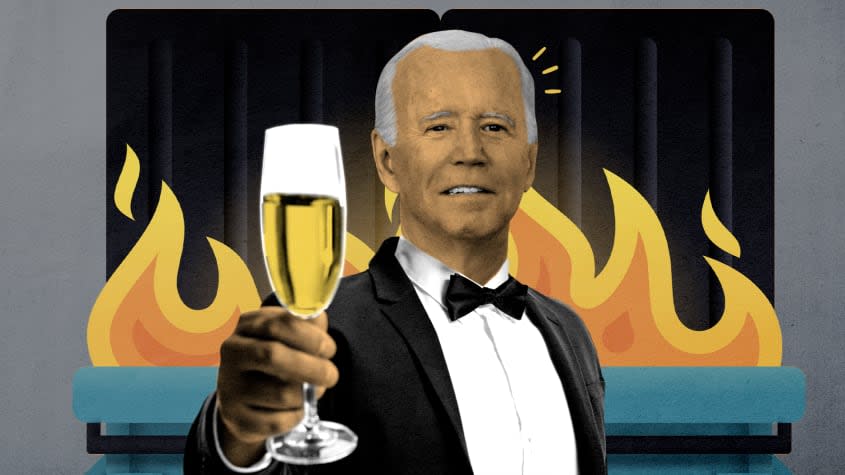 It’s taken several years, but the Washington press corps has its favorite party back in its traditional form. And that’s bad news.

Although the Biden administration waited until little more than a week out to confirm attendance – in part due to a recent COVID-19 outbreak stemming from the recent Gridiron dinner — it was confirmed that the president and first lady would attend the White House Correspondents’ Dinner.

“The @WHCA is pleased to host President Biden and Dr. Jill Biden as we honor the First Amendment at our dinner on April 30,” the White House Correspondents’ Association said on Twitter.

Every president since Calvin Coolidge has attended the WHCA’s annual dinner with the exception of Donald Trump. To him, members of the media are “enemies of the people.” In 2019, the Trump administration banned any of its officials from attending the dinner.

The dinner was canceled in 2020 and 2021 due to the pandemic, so this marks the official return of a Washington tradition. I understand Biden’s good intentions, but the White House Correspondents’ Dinner is one of the traditions that I hoped would have died in the plague. Or at the very least, dramatically change while it was away.

Consider all the bad news in the world — some of which the diners are supposed to cover. Well, at least for the night, instead of doing their jobs, they are hobnobbing with celebrities par excellence. Given inflation, an ongoing plague, and the litany of other problems impacting the nation, the “nerd prom” resurgence feels ill-timed. Given the times, a return to spectacle strikes me as a bad idea.

The guest list points to the frivolousness of the event.

Martha Stewart will be in attendance as a guest of The Daily Mail. Michael Keaton will be a guest of ABC News. CBS News is apparently bringing Drew Barrymore and Melinda Gates as their guests to the dinner. Kim Kardashian and Pete Davidson will be sitting at the Disney/ABC table.

And once the dinner ends, Comcast and NBC News will host their famous after-party at the Kennedy Center with DJ Jaime Ferreira. As if that weren’t enough, CBS will also be holding an after-party this year at the French ambassador’s residence.

Let me just say that I adore Martha Stewart; Michael Keaton is my favorite Batman; I own a Drew Barrymore mirror; I watch The Kardashians on Hulu; I have laughed at Pete Davidson. But what are they doing here?

And shouldn’t the press corps and president spend some time together in more formal settings?

Biden conducted only nine official news conferences in his first year in office through January – half as many as Trump held during his first 12 months in the White House. To be fair to Biden, I watched most of his news conferences and they were abysmal, not least because of the banal questions being posed to him. Most of the questions ignored other pressing matters like climate change, debt cancellation, the very fact that democracy itself is in peril.

Oh, and the pandemic isn’t over, no matter what the White House Correspondents Association thinks.

On Tuesday, Vice President Kamala Harris shared her health news after returning from a weeklong trip to California. “Today I tested positive for COVID-19. I have no symptoms, and I will continue to isolate and follow CDC guidelines. I’m grateful to be both vaccinated and boosted,” Harris tweeted.

But don’t worry about the president.

“She has not been a close contact to the President or First Lady due to their respective recent travel schedules. She will follow CDC guidelines and the advice of her physicians. The Vice President will return to the White House when she tests negative,” Kirsten Allen, the vice president’s press secretary, added.

One other factor that we must consider: The president is 79 years old. With all due respect, at that age, if Biden can’t walk around in a protective bubble, he should at least avoid being in rooms with hundreds of people.

I understand the venue will be testing for attendance, but if it can happen to the vice president, why not the president?

Yet, here everyone is, partying the night away with celebrity guests — as the world falls apart and in the middle of a pandemic. I hope everyone has a good night, but it feels like the wrong time to have this kind of party.

Russia is making ‘slow and uneven’ gains in Ukraine, at ‘significant cost’ to its army, U.S., U.K. assess