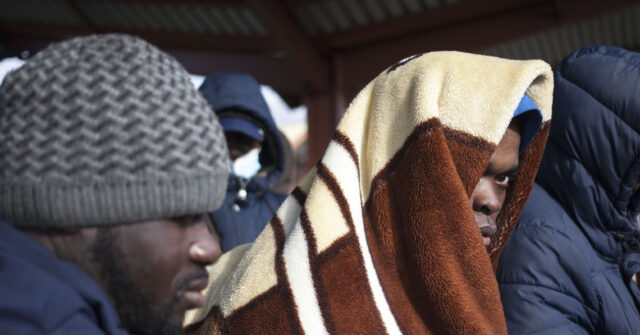 A report from the International Organisation for Migration (IOM) has claimed that around 300,000 non-Ukrainian migrants have arrived in the EU among those supposedly fleeing the conflict in Ukraine.

Among the wave of Ukrainian refugees who entered the European Union was around 300,000 non-Ukrainian nationals, not including European Union nationals — roughly over half of the non-EU foreign population of Ukraine prior to the war, the EU-funded website InfoMigrants reports.

How many of these foreigners were genuinely resident in Ukraine before the Russian invasion and how many might be exploiting the country as a back door to the West is unclear, however.

“[T]oday a third of the refugees who pass through Ukraine who do not come from Ukraine, but… come from sub-Saharan Africa in particular… who use this new migratory route to come to Europe,” the French MEP alleged

In the early days of the conflict, reports emerged of migrants from countries in Africa and elsewhere that had been seen among the Ukrainians arriving in Western European countries, such as France.

Member of the European Parliament (MEP) Nicholas Bay commented on the phenomenon in March, claiming that migrants from outside Ukraine were attempting to exploit the crisis in order to enter France.

“[T]oday a third of the refugees who pass through Ukraine who do not come from Ukraine, but… come from sub-Saharan Africa in particular… [they] use this new migratory route to come to Europe,” Bay stated.

“There are those who come for economic reasons, who weigh down our public accounts and our social accounts, and the Ukrainians towards whom we have a duty of European solidarity, of course,” he added.

While many Ukrainians who fled the war still remain abroad in countries like Poland, Romania, and elsewhere, many Ukrainian refugees have returned to the country in recent months.

A July report from the European Union border agency Frontex claimed that’s many as half of the Ukrainian refugees who came to the EU to escape the conflict had already returned to their home country.

European Union home affairs commissioner Ylva Johansson stated in July that the situation had largely stabilised and crossings between the EU and Ukraine had returned to levels seen prior to both the war in Ukraine and the Chinese coronavirus pandemic.

A video of an Irish “citizen journalist” questioning a number of South Asian men claiming to be 60-year-old Ukrainian refugees has gone viral, with the footage prompting questions about the people being given asylum in Western Europe