As Cheney leads Jan. 6 committee in Washington, her rival marches in parades back home 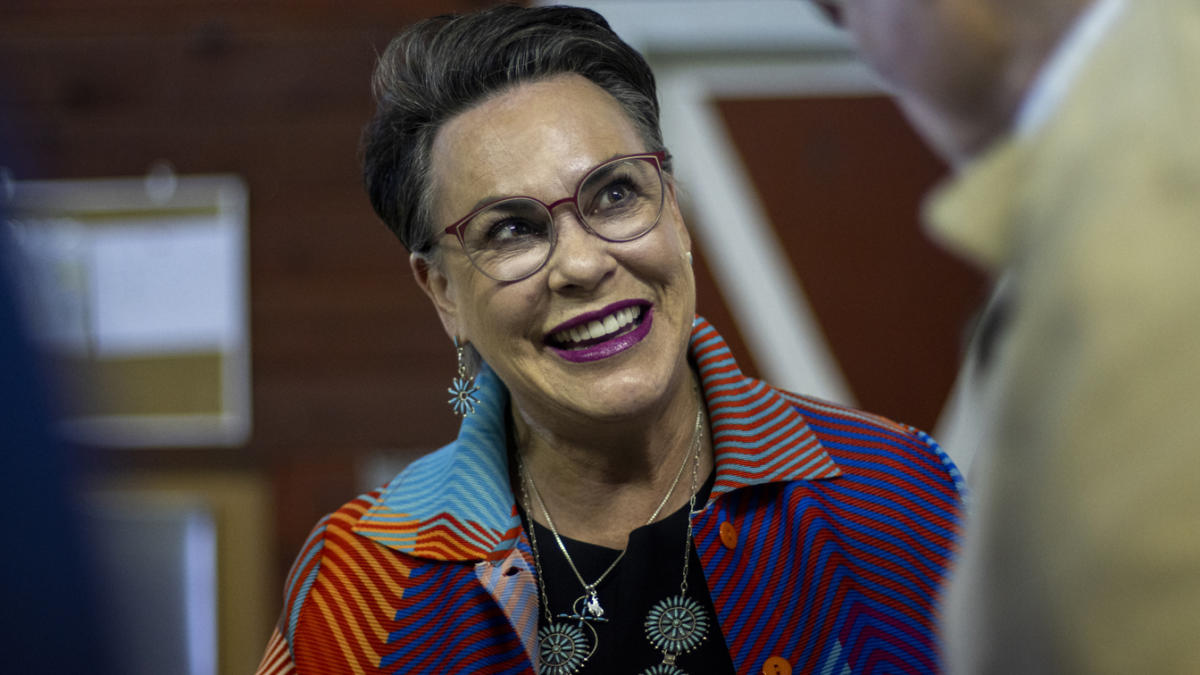 CASPER, Wyo. — At the moment that Liz Cheney walked into a hearing room in Washington, D.C., Tuesday, the woman who is trying to get her tossed out of Congress was shaking hands with voters in a midday parade attended by thousands.

Harriet Hageman, a natural resources lawyer in the state, strode up Yellowstone Highway in a black dress and black boots under a hot sun, ahead of a purple pickup truck towing a red and blue sign that said in big letters, “Hageman for Congress.”

At 11 a.m. local time, as the Jan. 6 committee was beginning its seventh hearing back in Washington, Hageman walked up to Sally O’Brien, a local supporter, and shook her hand.

“I’m supporting [Hageman] because everything that I have read about her, she is a true Wyomingite,” O’Brien told Yahoo News. “She’s a real conservative.”

As for Cheney, O’Brien said, “She doesn’t live here, for starters. She doesn’t really represent us. She says she’s a constitutionalist, but she doesn’t believe in justice for all, only for the Jan. 6 people.”

The methodical and compelling body of evidence produced by the Jan. 6 committee, showing former President Donald Trump’s involvement in a plan to overturn the 2020 election, seems to have had little impact on Wyoming voters ahead of the Aug. 16 Republican primary here. Instead, some see Cheney’s role on the committee as another reason not to support her.

“She betrayed the voters of Wyoming with her Jan. 6 show trial,” said one local businessman, Bob Ide, a candidate for state Senate who also took part in the “rodeo parade” on the back of a horse, wearing a cowboy hat and carrying a Wyoming flag.

Hageman, who has refused to acknowledge that the 2020 presidential election was legitimate, is one of several pro-Trump Republicans challenging Cheney in next month’s GOP primary. Buoyed by the former president’s endorsement, Hageman is Cheney’s main opponent in the contest, and has led by large margins in several polls.

Hageman stood petting Ide’s horse before she began her roughly 90-minute march along the parade route. She sought to avoid questions from reporters, but when she was asked by Yahoo News if the Jan. 6 committee had helped her candidacy, she said, “I believe so.”

She then walked away from any further questions and would not acknowledge other reporters who attempted to speak with her.

Even one of Cheney’s supporters, state Sen. James Anderson, who marched with other Cheney backers in the parade, expressed displeasure with the direction the Jan. 6 committee has taken.

“I thought the committee was supposed to be finding out if there was any un-American activities going on with the event that day, but I think it’s gotten clear off from that. I think it’s taken after Trump completely, and maybe it’s a little misguided now,” Anderson told Yahoo News.

But he said he did not think Cheney, the committee’s vice chair, was responsible. “I don’t know if she’s able to guide the work. They give them the assignment and she carries out whatever they tell her,” he said.

Anderson said voters should support Cheney “because she’s an intelligent representative for us that can get things done in Washington, D.C., for us.”

“That’s a terrible, terrible chore for one person from Wyoming to go to Washington, D.C, and accomplish anything, and she’s the person that can do it,” he said.

Anderson was not concerned, however, by the message that will be sent if Cheney loses her seat in Congress because she stood up to Trump’s attempts to undermine democracy.

But after Anderson downplayed the consequences of a Cheney loss, a man he had been chatting with moments beforehand interjected.

“I can answer that,” said Eldad Vered, a retired physician who moved to the state from Colorado a few years ago.

“I think that our country is in trouble if she loses,” said Vered, wearing a T-shirt printed with “Team Cheney” as he marched in the parade. “We have one honest person and lots of people who are brainwashed. I would love to see Wyoming stand for Liz Cheney for honesty, for the Constitution and for integrity.”

Cheney, the daughter of former Vice President Dick Cheney, has been resolute in her determination to hold the former president accountable for his role in the Jan. 6, 2021, assault on the U.S. Capitol. The attack was carried out by Trump supporters, who were attempting to stop the certification of the election by Congress.

As the top Republican on the Jan. 6 committee, Cheney has helped guide its efforts to uncover a concerted effort by Trump and his associates to undermine the legitimacy of the 2020 election by baselessly claiming Joe Biden won due to widespread fraud. Trump continues to insist he won the election, an idea that was refuted by many of his own top advisers, including then-Attorney General Bill Barr.

The committee has also shown that Trump was part of a plot to pressure state legislators to throw out the votes of the American people and to pressure then-Vice President Mike Pence to overturn the result.

Trump also knew that the crowd on Jan. 6 was armed and likely to be violent, the hearings have shown. Tuesday’s hearing showed the extent to which Trump associates such as Roger Stone and Michael Flynn had connections with extremist militia groups like the Proud Boys and Oath Keepers, who played key roles in fomenting violence that day.

Cheney also said Tuesday that Trump had called a witness who has yet to appear before the Jan. 6 committee. According to Cheney, the witness did not take Trump’s call and instead referred the matter to their lawyer, who in turn told the committee what had happened.

Cheney said the committee had informed the Justice Department about Trump’s phone call to the witness. “Let me say one more time,” Cheney said during her closing remarks. “We will take any effort to influence witness testimony very seriously.”

Despite her staunchly conservative voting record, Cheney is now the underdog in the race for Wyoming’s sole House seat. The deep-red state voted for Trump by over 40 points in 2020, and the winner of the GOP primary is all but assured of victory in November’s general election.

Cheney’s refusal to go along with Trump’s election lies cost her a top post within the House GOP leadership last year. But she remained undaunted. “I will do everything I can to ensure that the former president never again gets anywhere near the Oval Office,” she said at the time.

Two weeks ago, Cheney reiterated her resolve in a speech at the Ronald Reagan Library in Simi Valley, Calif.

“We have to choose. The Republican Party cannot be both loyal to Donald Trump and loyal to the Constitution,” she said. “We stand at the edge of an abyss, and we must pull back. We must pull back.”

Cheney said she has been motivated to stand against Trump’s lies about the 2020 election in the hope that her children “will continue to live in an America where the peaceful transfer of power is guaranteed … [and] in an America that is a nation of laws, not of men.”

As a result, unseating her has become one of Trump’s most sought-after goals. He has campaigned for Hageman here in Casper and recently described Cheney as a “despicable human being.”

Hageman has made Trump’s endorsement central to her candidacy, and along the parade route Tuesday she received several loud ovations from onlookers.

There was one man on a bicycle, however, who jeered at her. “I hope you lose,” he yelled.

He did not want to give his name to a reporter but said that although he usually voted for Democrats, he was switching over to the Republican primary to vote for Cheney this time, a move that Cheney has encouraged.

“I’m going to vote for someone who tells the truth,” the man said. “Not someone who is a lying traitor.”