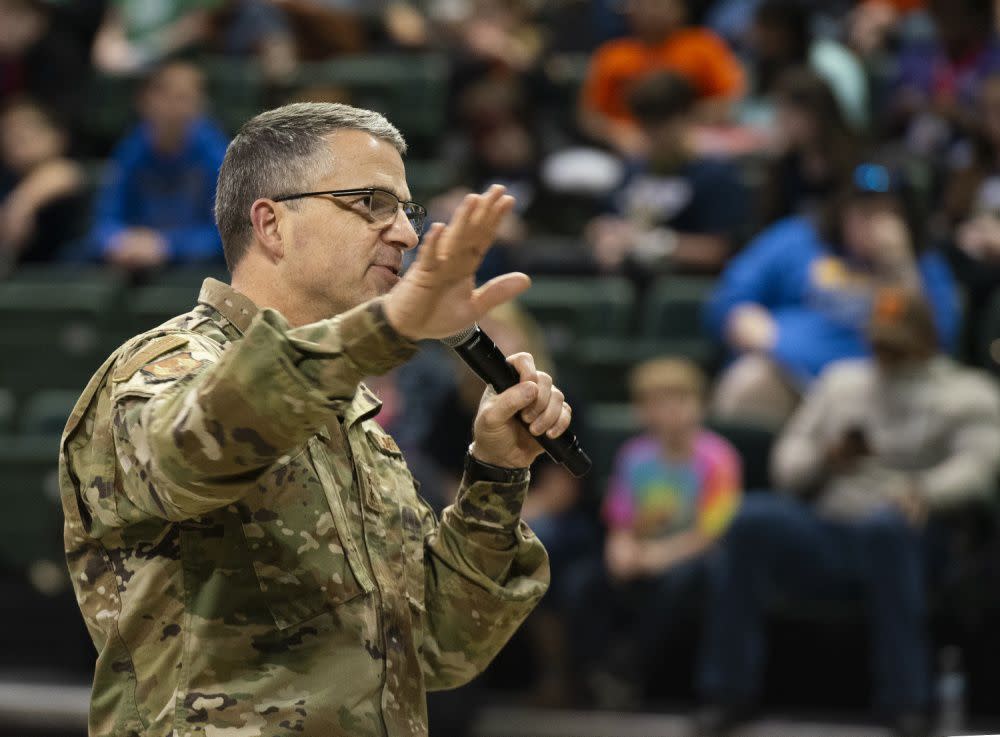 WRIGHT-PATTERSON AIR FORCE BASE, Ohio — Maj. Gen. Bill Cooley’s sister-in-law, who has accused the two-star general of sexually assaulting her in 2018, took the stand on the second day of his military trial here Tuesday.

The plaintiff testified that the alleged incident at her home in Albuquerque, New Mexico, nearly four years ago was a frightening “out-of-body” experience that has fractured her personal life.

“I was a little shocked at that moment,” she said. “He had never done anything like this before.”

She agreed to be publicly identified by her relationship to Cooley, but not by name, for the first time Tuesday. Air Force Times does not publish the names of alleged sexual assault victims without their permission in order to protect their privacy.

Prosecutors in the Air Force’s first court-martial of a general officer painted Cooley as an egotist who, when rejected by a woman he had long coveted, now downplays an attempt to molest her.

The two-star general’s defense team argues the pair shared a consensual kiss that his sister-in-law has blown out of proportion, and portrayed her as an unreliable narrator.

Cooley commanded the Air Force Research Laboratory in Dayton, Ohio, at the time; his sister-in-law is a civilian.

“I thought Bill and I were finally friends” after an “almost nonexistent” relationship over their three-decade connection, the plaintiff testified at the bench trial. Cooley had become kinder and more thoughtful, complimenting her home and career when they saw each other on occasion.

He also grew more physically affectionate, she said, going from brief hugs to full embraces. Certain interactions unnerved her: Cooley sometimes kissed the top of her head and smelled her hair during a hug, which made her so uncomfortable that she brought it up to her husband.

Cooley purportedly kissed and fondled the woman without her consent in August 2018 after a barbecue at her home. He was in the Albuquerque area for work at Kirtland Air Force Base and arrived early to spend the weekend with family and friends.

On Aug. 12, 2018, Cooley stayed late after the barbecue to drink bourbon with others around a fire. He had spent time with his family in their backyard pool, snacking on chips and salsa and enjoying the summer sun.

The general had already moved his luggage from his sister-in-law’s house to stay with his parents a few blocks away, but later decided to return to the first house. He asked her for a ride down the street to pick up his things; she obliged.

Two-star to be court-martialed for sex assault

Once alone together in the car, Cooley allegedly took the woman’s hand while it was on the gear shift. He told her he’d fantasized about having sex with her for years, including while they were in the pool that weekend, according to the prosecution.

“Am I the only one who feels this sexual tension?” Cooley asked, according to Maj. Abbigayle Hunter, a uniformed lawyer for the plaintiff.

“I am utterly, completely stunned. I’m speechless,” the sister-in-law said of her reaction.

She demurred, telling Cooley she was happy with her life as it was. If he was lonely with his wife, she said, he should address that another way.

While he went into his parents’ house to retrieve his luggage, his sister-in-law remained in the car, shaking and trying to collect her thoughts, she said: “This is not OK.” She tried and failed to find the audio recording function on her phone by the time he returned.

The plaintiff said she decided not to leave while Cooley was inside because she felt sorry for him and was trying not to worsen the situation. Even so, she told defense attorney Dan Conway during cross-examination that she did not want to be alone with the general or converse with him any longer.

He returned to the car and they headed home. She tried to change the topic to defuse the situation, according to the prosecution. The defense says she wanted to press Cooley about his interactions with a female high school friend who had recently reached out.

On the short drive back, Cooley supposedly took his sister-in-law’s hand again and placed it on his groin, though the woman said she could not recall whether it happened while moving or while parked at her house. She began to panic.

The woman pulled her car into the garage, at which point Cooley allegedly pinned her against the inside of the driver’s side door, kissed her and tried to touch her genitals through her underwear.

“I felt like I was having an out-of-body experience. I thought, ‘This is how rapes happen,’” she said.

She managed to push him off and wedged her arm between them to fend off another advance. Her husband came out to the car and asked if everything was OK, and the pair indicated they were having a conversation. The woman said she then felt safe enough to leave the garage and go inside to her bedroom.

The plaintiff did not see her brother-in-law again until they were in the kitchen together before work the next morning. The woman was “reeling” from the prior night’s events, she said, and wanted to keep things polite between them while she processed her feelings.

Within the next two days, the woman told her husband what had happened with his brother.

“He was taking a bite of some food and … dropped the fork,” she said of her husband.

Maj. Lindsey North, one of Cooley’s defense lawyers, said his accuser’s letter and three voicemails prove the interaction was consensual.

The defense asserts that Cooley’s sister-in-law had flirted with him earlier in the evening, and that she was hesitant to tell her husband about the situation to avoid his ire. Conway also sought to show that Cooley’s brother and his wife wanted to publicly humiliate the general.

Cooley’s sister-in-law vehemently denied that characterization of events. The idea that it was consensual is “simply not true,” she said.

The woman was unsure what to do in the weeks following the alleged incident. She didn’t want to further damage an already fraught family situation, but decided to try to make amends and move forward in a healthy way, she said.

She wrote him a note and considered giving it to him, but instead left him a voicemail with what she’d written, saying she thought he had barely tolerated her and that she didn’t want their future interactions to be awkward.

She compared her shock to a scene in the 2003 romantic comedy “Love Actually,” when Juliet (Kiera Knightley) realizes that her husband’s best friend Mark (Andrew Lincoln) is in love with her.

As in the film, the defense says the surprise turned out to be a pleasant one. Prosecutors argue the opposite.

“I’m flattered. Stunned, but flattered,” the plaintiff said in a voicemail aired in court. She told Cooley he was a good person and that she hoped he could decide what would be best for him.

The woman said on Tuesday she regrets phrasing their interaction as “we kissed,” rather than a one-sided action, in a voicemail telling Cooley that she had explained the situation to her husband.

“There is no handbook” for making amends in a scenario like this, the plaintiff said.

Cooley, his accuser and her husband went to therapy together. They asked him for honesty, a heartfelt apology and steps to demonstrate he would right his wrongs, including repayment for the costs of counseling.

But the prosecution said things soured when Cooley’s brother and sister-in-law felt the two-star was not owning up to his actions in discussions with others, including his parents. The woman had told her husband she would not report the incident to avoid causing more grief, but the couple later felt they had no choice but to notify the authorities.

17 years on, military sexual assault prevention is early in development

Now the plaintiff’s team is trying to use Cooley’s own words to prove their case.

“I have violated both of you,” he said, according to Hunter, the plaintiff attorney. “I am so very sorry.”

Cooley “conjured in his self-serving mind a scenario” in which he did what he wanted and got away with it, according to the prosecution. He called himself “selfish and out of control,” and promised it wouldn’t happen again.

He told his family he would seek counseling for problems objectifying women, and that he would pay for “legitimate” damages. He did send nearly $1,000 to his brother and sister-in-law, but warned he would report them for blackmail if they sought any further restitution.

Cooley’s brother began to worry the disagreement could affect his job, according to a letter presented in court.

“Bill Cooley has caused real harm to me and my wife, and I fear him.”