After weeks of poring over evidence, Ukrainian officials single out 10 Russian soldiers for atrocities in Bucha. 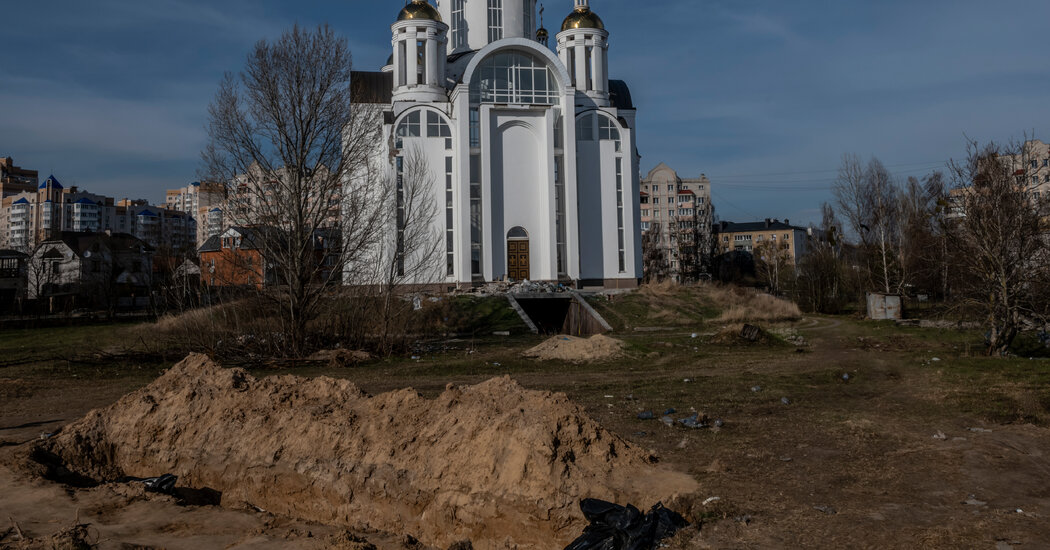 But this week, they made a breakthrough and, for the first time since the war began, Ukrainian officials published the identities and photos of 10 Russian soldiers who they said had committed war crimes in the town of Bucha, a suburb north of Kyiv, the Ukrainian capital, that was the site of some of the war’s worst atrocities.

Hundreds of Ukrainian law enforcement agents have spent weeks pinpointing who the soldiers were who terrorized Bucha during the month of March, when Russian forces occupied the town and at least 400 civilians were killed.

“It’s been very difficult,” said Ruslan Kravchenko, a lead prosecutor. “We have to find information in tiny bits and piece it together.”

Prosecutors said they showed photos of the 10 Russian soldiers they believed were involved to witnesses and victims — to make a positive identification. They were aided by a team of Ukrainian journalists from an organization called Slidstvo.info who then delved into the social media accounts of those soldiers, publishing personal details about the suspects.

Some like fishing. Others are married. One came from a remote Russian town more than 4,000 miles away and served as a firefighter.

“It is difficult to say what forced him to change from the profession of rescuer to the profession of war criminal,” said Dmytro Repliaanchuk, one of the journalists with Slidstvo.info, in a video released about the investigation.

Bucha is still reeling from the horrors. The bodies of hundreds of civilians were found there after Russian troops pulled out of the area in late March.

Many victims had been shot in the back of the head and others had been executed with their hands tied behind their backs. Ukrainian officials said that women had been raped and children killed.

Corpses lay on the streets for weeks. While the Russians were in control of the town, Bucha’s residents were too terrified to collect them.

Ukraine’s prosecutor general’s office said in a statement on Thursday that the 10 named Russian soldiers took civilians hostage, “killed them with hunger and thirst, kept them on their knees with their hands tied and their eyes taped” and “humiliated and beat” them.

The statement, which was posted on social media, included photos of the soldiers identified.

“We know all the details about them and their actions,” President Volodymyr Zelensky of Ukraine said in an overnight address. “And we will find everyone, just as we will find all the other Russian thugs who killed and tortured Ukrainians, who tormented our people, who destroyed houses and civilian infrastructure in Ukraine.”

Russian officials have denied that their troops committed any war crimes in Bucha, calling the images and witness accounts fake. President Vladimir V. Putin bestowed honors on the unit that was in Bucha, the 64th Separate Motor Rifle Brigade, awarding them the title of “Guards.”

But dozens of witnesses, along with independent human rights investigators, have said the occupying Russian forces did torture and kill civilians, among other crimes.

In a recent Human Rights Watch report, the advocacy group said that “Russian forces committed a litany of apparent war crimes during their occupation of Bucha” and there was “extensive evidence of summary executions, other unlawful killings, enforced disappearances, and torture, all of which would constitute war crimes and potential crimes against humanity.”

Ukrainian authorities said the 64th Separate Motor Rifle Brigade was responsible for some of these atrocities and the soldiers’ involvement had been “established through investigative and coordinated work of prosecutors and police officers.” The soldiers were all young and lower ranking and included four privates, four corporals and two sergeants, Ukrainian officials said.

“It takes a lot of time to identify an individual soldier,” said Mr. Kravchenko, the prosecutor.

He added: “There will be no forgiveness.”

The investigation is likely to produce more detailed allegations in the coming days. For the past month, Ukrainian police officers and other law enforcement agents have combed Bucha’s ruined streets, interviewing witnesses and collecting forensic evidence from bodies and crime scenes, prosecutors said.

It is rapidly becoming an international effort. The Ukrainians are working with French forensic experts who have set up a trailer on the site of a government office in Kyiv. They are also working with the International Criminal Court, whose chief prosecutor recently visited Bucha and called Ukraine “a crime scene.”

Britain just announced that it, too, was sending in specialists, including those who handle conflict-related sexual violence.

Experts caution that it’s one thing to level a case in Ukrainian court against Russian soldiers; it’s another to actually bring them to justice. Ukrainian authorities say all suspects will be tried, one way or the other.

“Ukraine’s position is absolutely clear,” Mr. Zelensky said. “Every Russian criminal must be, and will be, brought to justice. Whoever they are and wherever they hide, we will find them all and make them bear responsibility.”