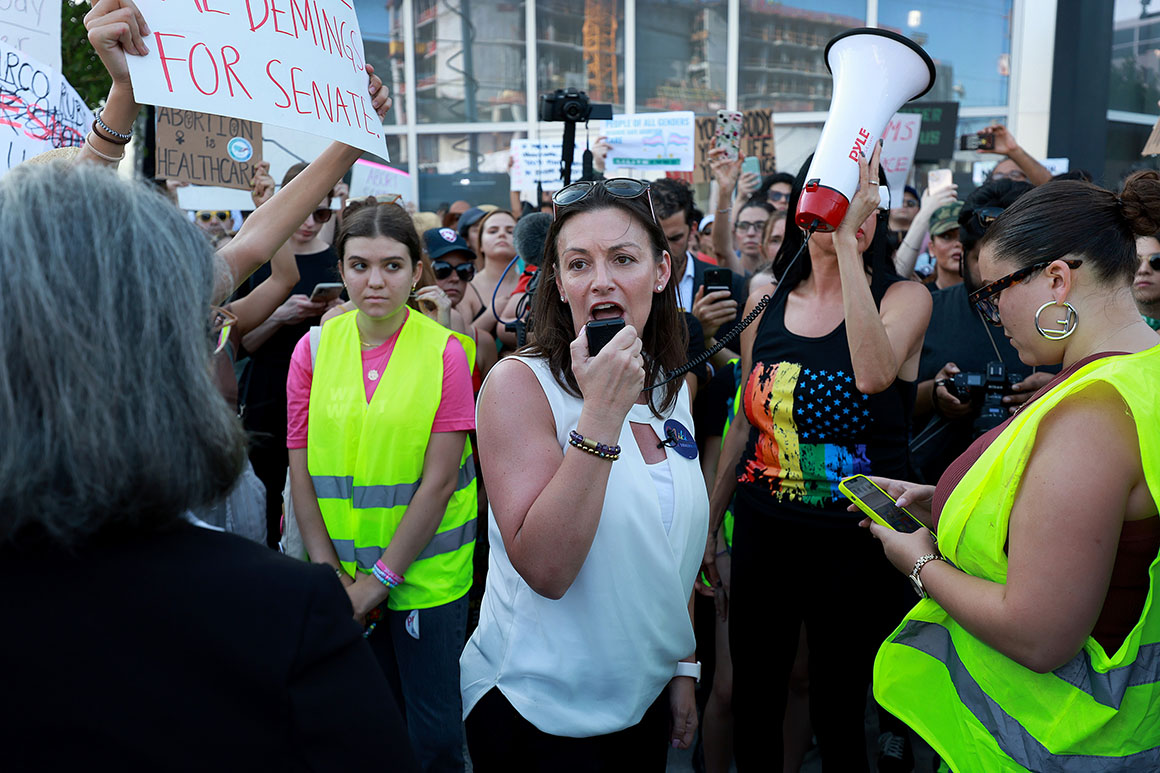 Democratic gubernatorial candidates in Arizona have also escalated abortion as an issue. Democratic primary frontrunner Secretary of State Katie Hobbs has called for the repeal of a state law that prohibits most abortion procedures while her challenger wants to pardon abortion doctors who perform the procedure.

Whether it’s a winning strategy is yet to be seen. Fernand Amandi, a Democratic strategist and pollster, isn’t sure the issue will create “traction” in primaries but says it could be much more “potent” in the general election.

“What Democrats have the opportunity to do is to take something that was theoretical — that is now a stark reality — and show this modern Republican Party is in the business of taking rights away,” Amandi said.

Democrats had previously used conservative Supreme Court justices and Republicans as useful foils in the ongoing battle over abortion. But since the Supreme Court overturned federal abortion rights in late June, Democrats have increasingly started using abortion as a cudgel against each other, a sign of how the issue will be used to energize liberal voters in the remaining 21 primaries before the November elections.

A recent Pew Research Poll, for example, found that 57 percent of Americans disapproved of the Supreme Court’s decision, including 69 percent of adults under 30. And broken down by party, the poll found 82 percent of Democrats and Democrat-leaning independents disapproved with the high court’s ruling.

Nowhere is this more apparent than in Florida’s gubernatorial race, where Fried and Crist are fighting each other to see who will take on Republican Gov. Ron DeSantis. The Florida primary is scheduled for Aug. 23.

Fried, the only statewide elected Democrat, has trailed Crist in polls, fundraising and endorsements. But in weeks leading up to the primary, she has constantly criticized Crist over his transformation from a Republican to a Democrat — suggesting Crist isn’t as pro-abortion rights as he claims.

“He can’t be trusted, he never fought for a woman’s right to choose,” Fried said in an interview. “He’s been on all sides of the issue. This is a time when we need strong advocates on an issue.”

Fried’s campaign has released a torrent of clips and mailers on social media, spotlighting Crist’s political past. That includes Crist saying he had no regrets about appointing Charles Canady to the Florida Supreme Court when he was a GOP governor. Canady, a former conservative congressman, could soon help undo state constitutional protections that were previously used by the high court to strike down abortion restrictions.

Fried’s camp, however, isn’t stopping there. While her campaign has not yet purchased any ad time, a source close to the campaign who is not authorized to discuss strategy publicly said “every Democratic primary voter will know Charlie is pro-life. 1,000 percent.”

Supporters of Crist have fired back, saying they “trust” him on abortion and that Fried should be directing her criticisms at DeSantis, who signed into law this year a ban on all abortions after 15 weeks of pregnancy.

State Rep. Anna Eskamani, an Orlando Democrat and Crist supporter who once worked for Planned Parenthood, defended Crist as a strong advocate for reproductive rights.

“I’ve been in the trenches fighting for abortion in Tallahassee and D.C. for 10 years and have never seen her champion any of these issues while she was a lobbyist in Tallahassee,” said Eskamani in a text message. “I get it. It’s primary season. And no candidate is perfect. But it’s not honest to throw these attacks at Charlie when [he] literally vetoed an anti-abortion bill back in 2010.”

Crist did veto a Republican-backed bill during his final year as governor that would have required women seeking an abortion in the first trimester to pay for an ultrasound and possibly view it. He also vowed, if elected, to sign an executive order that would block state agencies from taking action to block abortions that had been authorized under Roe v. Wade and under Florida’s privacy clause.

Joshua Karp, an adviser for the Crist campaign, contends that Democrats — who backed Crist in his unsuccessful 2014 campaign for governor against GOP incumbent Rick Scott — “know Charlie.”

“We think people are smart enough to look beyond these political gimmicks people toss out there,” Karp said.

While the battle over abortion rights may have its sharpest contrast in the Florida primary, it’s also become a factor in a handful of other Democratic primaries.

In Rhode Island, gubernatorial hopefuls Nellie Gorbea, the secretary of state, and former CVS executive Helena Foulkes took veiled shots at McKee for not pushing more aggressively to pass the so-called Equality in Abortion Coverage Act. That measure would repeal the state’s ban on taxpayer-funded abortions and expand insurance coverage for the procedure to people on Medicaid and those on the state employee health plan.

The state legislature wrapped its session for the year without approving the bill and McKee, while supportive of it, declined to include the provision in his budget. Gorbea has called for a special session to pass the bill and Foulkes has pledged to include it in her first budget if elected governor.

“Democratic governors are stepping up across the country to protect abortion rights but Rhode Islanders have gotten nothing but lip service from [McKee],” Foulkes tweeted four days after the ruling.

McKee did sign an executive order recently shielding abortion patients and providers from legal liability and professional discipline, among other protections. The order is similar to one that neighboring Massachusetts Gov. Charlie Baker, a Republican, issued roughly an hour after the Supreme Court decision came down.

McKee ascended to the governor’s office last year after Gina Raimondo became Commerce secretary and faces a fight for a full term. He trailed Gorbea by four points in a recent Suffolk University/Boston Globe poll of the Democratic primary, which will be held Sept. 13, but leads Foulkes, former Secretary of State Matt Brown and Luis Daniel Muñoz, a doctor.

Democratic gubernatorial candidates in Arizona have also doubled down on fighting for abortion rights since last month’s ruling. The state has pre-Roe law that that prohibits most abortion procedures on the books that had been blocked by courts for decades, with a looming legal battle in the state over it.

Hobbs, besides calling for the repeal of that pre-Roe law, has also ticked off “defending our reproductive health care” in a recent ad.

And her challenger, former Nogales Mayor Marco Lopez, has promised that, if the state law goes into effect, he will pardon abortion doctors who provide the procedure and codify abortion protections in the state Constitution.

Zach Montellaro contributed to this report.