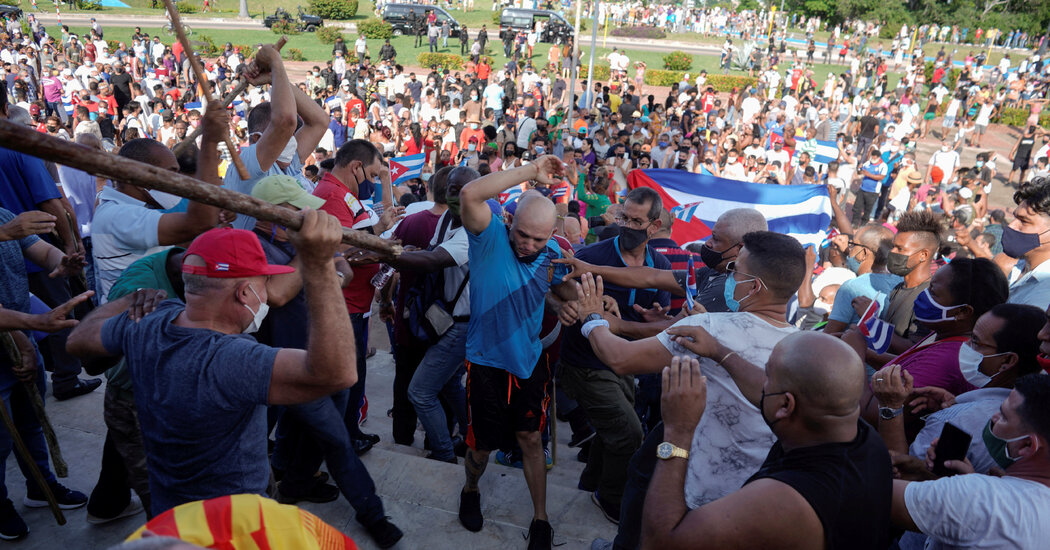 MEXICO CITY — One year after Cubans took to the streets in one of the largest protest movements since the Communist government took power six decades ago, hundreds of demonstrators are languishing in prison while tens of thousands have fled repression and destitution on the island.

Economic conditions have only worsened since frustration over the worst financial crisis to hit the country since the 1990s, coupled with demands for political and social changes, propelled last July’s demonstrations.

“The situation gets worse every day,” said René de Jesús Gómez Manzano, a longtime Cuban dissident who has been previously jailed by the government. “Here, whoever doesn’t leave, it’s because they can’t.”

Human rights groups say some of those arrested during and after the protests have been tortured and that many have been sentenced to long prison terms after unfair trials.

A report by Human Rights Watch released on Monday based on interviews with more than 170 people documented instances of “arbitrary detention, abuse-ridden prosecutions” and even torture. The report also said that the government’s failure to address the underlying issues that sparked the protests had created a mass exodus from the island.

Cuban migration to the United States has reached its highest level in four decades: Between January and May, more than 118,000 Cubans were detained at the southern border, compared with 17,400 in the same period last year. Nearly 3,000 Cubans have been intercepted at sea since October.

“This is the greatest moment of repression in Cuba at least this century,” said Juan Pappier, senior Americas researcher at Human Rights Watch. “Whoever doesn’t like the rules imposed by the regime has two options: prison or exile.”

About half of the 1,400 people detained by security forces after last year’s demonstrations were still behind bars as of July 1, including several people under the age of 18, according to Cubalex, a local human rights group.

The crackdown has had a chilling effect on the protest movement, quashing any hope of meaningful social change. Still, the flame lit last July may not have been entirely extinguished, said Javier Corrales, a political science professor at Amherst College.

“The very same forces that prompted the protest are still there,” Mr. Corrales said. “Once these roundups end and you do return to a little bit of business as usual, people may go back to the same frame of mind that they may feel like they’re not afraid anymore.”

The Cuban government did not respond to requests for comment sent through the foreign media office. Last month, the country’s attorney general released a statement detailing the sentencing of protesters who the government accused of attacking “the stability of our socialist state.”

According to the attorney general’s office, nearly 300 people have been sentenced to prison, including 36 who were charged with sedition and handed sentences of up to 25 years in prison.

Among those sentenced were two well-known Cuban artists, Luis Manuel Otero Alcántara and Maykel Castillo, who were featured in a video for the song “Patria y Vida” that became an anthem for protesters and won a Latin Grammy. In June, Mr. Castillo received a nine-year sentence, while Mr. Otero Alcántara was sentenced to five years in prison.

The seemingly arbitrary and punitive nature of the government’s clampdown is illustrated by what Saily Núñez Pérez described happening to her husband, Maykel Puig Bergolla, a road worker.

The couple took to the streets last July 11 to protest the spiraling economic crisis that had left them without food or medicine for their mentally disabled son.

“It was a historic moment, we felt good, we felt free for the first time in our lives,” Ms. Núñez said in a phone interview. “We only wanted change, we wanted medicine, we wanted freedom above all.”

According to Ms. Núñez, her husband was detained by the police the day after the demonstrations without a warrant and was physically and psychologically tortured. For more than two weeks, she knew nothing of his whereabouts or his condition, until July 29, when he was allowed to make a phone call.

“I was left alone,” Ms. Núñez said, noting that Mr. Puig had been the main provider for the family. “Sometimes, I feel very down, but then I get my strength back. I see him as a hero.”

In January, Mr. Puig was put on trial along with eight others for crimes that included public disorder and attempted homicide, which Ms. Núñez says are bogus charges. Nevertheless, he was found guilty and ultimately sentenced to 14 years in prison.

Human Rights Watch found that detainees like Mr. Puig were often held in unsanitary conditions and subjected to abuse, including sleep deprivation. Protesters were tried jointly, the report found, many without legal representation in mostly closed hearings, “with evidence consisting largely of security officers’ statements.”

The government’s punitive approach has sparked international condemnation, including from the United States and European countries.

On Saturday, Secretary of State Antony Blinken said on Twitter that the United States was imposing sanctions on 28 Cuban officials for “restricting Cubans’ human rights and fundamental freedoms.”

“We call on the regime to unconditionally and immediately release all those unjustly detained,” he said.

The Cuban government has accused the United States of instigating the protest movement.

Mr. Rodríguez, in an earlier tweet, also blamed the U.S. government’s immigration policy for encouraging mass migration as well as “the trafficking of people” that had caused “the loss of life and the suffering of Cuban families.”

To help alleviate the economic strain that has plagued the island for years and was made worse by the pandemic, the Cuban government has adopted a handful of financial measures, including lifting a ban on private businesses.

President Miguel Díaz-Canel, during a meeting with provincial governors last month, vowed to ease the financial hardship, and blamed the nation’s economic woes on the global downturn caused by the pandemic and the war in Ukraine, as well as the decades-old U.S. trade embargo.

“We can assure our people that the main cause behind this whole situation is the intensification of the blockade,” he said. “Here we are working intensely to overcome all these adverse situations we’re living through.”

But some Cubans say the government’s efforts have done little to improve the country’s financial situation.

Saily González Velazquez, a Cuban businesswoman who created the country’s first co-working space for entrepreneurs, said she did not take part in last year’s protests because she was sick. But after seeing so many people detained, she felt compelled to speak out.

“I couldn’t take so many violations,” she said. “All that persecution, that witch hunt.”

In May, she held a one-woman protest in support of Mr. Otero Alcántara and Mr. Castillo, the two artists who were on trial.

Last month, Ms. González said she was summoned to a meeting by state security forces and given an ultimatum: Either she leave the country or she, too, would be imprisoned. Three days later, she was on a flight to Miami.

Cubans are an “impoverished people, a sad people, a people whose main aspiration is to migrate,” Ms. Gónzalez said. “Because they’re afraid to fight against the repression that the Cuban government has unleashed.”