A Walk in Their Heels: Meet the Hustle Evangelist 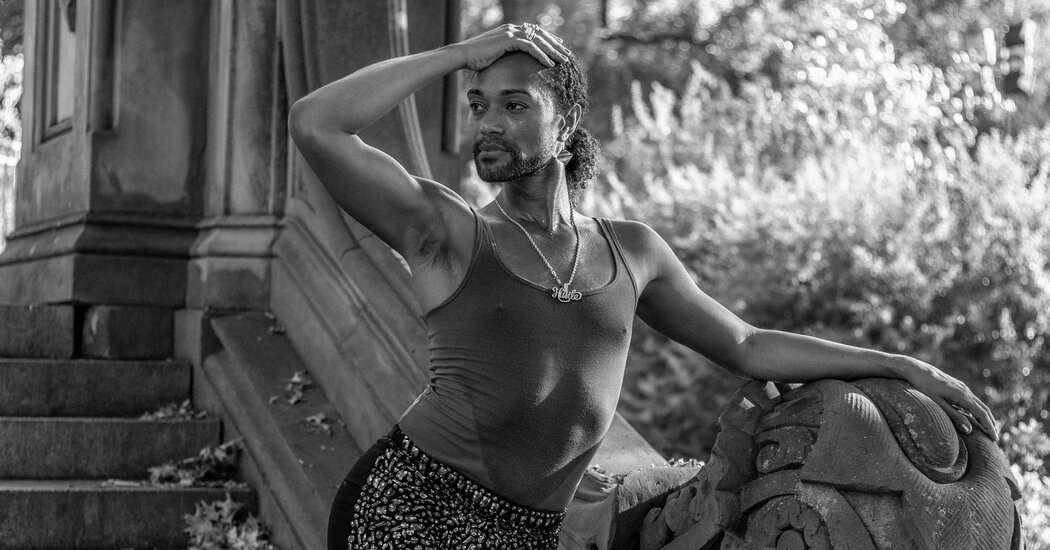 On a humid weekday evening last month, as shade began to slant across Central Park, a small crowd made a dance floor out of the Bethesda Fountain’s brick terrace. Disco rhythms pulsed from a DJ booth on one side of the plaza, crowned by a pink-tinted mirrorball. There were moments of voguing and house dancing, and a few children wiggling joyfully. But most in the group paired off, in every combination of genders, to do the hustle.

At the center of the action was Abdiel Jacobsen, known professionally as Abdiel, festive in gold heels and rhinestone-studded shorts. An organizer of the party — part of a series known as Dance Is Life — Abdiel danced hustle with everybody: a stylish character in a straw fedora, an older dancer in a bright-red polo, a small child in pigtails. Passers-by began sitting on the lip of the fountain to watch.

“How happy is this?” an onlooker said.

If you know hustle only from “Saturday Night Fever,” you don’t know hustle. The finger-pointing line dance made famous by that movie has little to do with the partnered style that first emerged in the early 1970s in the streets and the underground clubs of New York City. Hustle is fluid, fleet, as elegant as it is funky. A dance in 3/4 time, it moves elliptically through disco’s 4/4 beat.

Created by young people of color, with many queer innovators, hustle offers a progressive vision of social dance — especially in its gender-neutral approach to partnering. In hustle, anyone can dance with anyone, and anybody can lead or follow.

Though hustle faded in popularity along with disco, a small group of devotees have kept it alive. For Abdiel, 32, their company feels like home. A former principal dancer with the Martha Graham Dance Company with experience in competitive ballroom dance, Abdiel found a different type of freedom in hustle culture.

For Abdiel, who is genderfluid and uses they/them pronouns, “hustle has always been about unity,” they said. “It’s about everyone coming together, just as they are, under the sermon of the music.”

Over the past few years, Abdiel has become both a hustle preservationist and a hustle evangelist. Through the Dance Is Life series and their continuing research and performance project, Do The Hustle, they are working to document the form’s history and explore the creative possibilities of its future.

In its long tradition of gender-neutral partnering, hustle is an outlier. But other corners of the contemporary social dance world are also embracing a non-gendered approach to leading and following — a reflection of how the world has changed, and who dancers are off the floor.

Abdiel has become friends with the dancer and choreographer Caleb Teicher, whose show “Sw!ng Out” features gender-neutral Lindy Hop. At the Fire Island Dance Festival this year (July 15-17), Abdiel and Teicher will premiere a nonbinary duet that includes elements of both hustle and Lindy Hop, set to Prince’s “Soft and Wet.”

Teicher is nonbinary, and like Abdiel, began using they/them pronouns relatively recently. Both said they found it easier to articulate their layered, complicated experiences of gender in dance than in words.

“We’re kind of, in tandem, finding a new truth within ourselves personally, and figuring out how to communicate that realization to others,” Abdiel said. “Dance is helping us navigate that.”

Abdiel grew up in Florida and Maryland, doing West African dances in the living room with their mother, who is from Ivory Coast. “There would always be music on, we would push aside the coffee table, and that was the dance bug that infected me — that kind of joy,” Abdiel said.

As a teenager, they began training in and teaching ballroom. At college, at the University of the Arts in Philadelphia, Abdiel discovered Graham technique, and found that it spoke to an as-yet-unexplored part of their being.

“For religious reasons, I had suppressed my sexual identity and my gender identity for my whole childhood,” Abdiel said. “Ballroom was so binary, too. And then I learned about Martha Graham, with her philosophy that you are the only one of you that exists, and therefore you have a responsibility to share your whole self with the world. I was like, Oh my god!”

Abdiel joined the Graham company in 2011, but came to find the Graham repertoire, with its he-man roles for male dancers, limiting. While dancing with the company, they began wearing heels to the ballroom classes they were teaching on the side. It was partly an experiment in empathy: How could they show women how to dance in heels without knowing what it felt like? But it also kindled a desire to seek out more gender-neutral dance environments. They started a blog, “A Walk in My Heels,” documenting their experiences teaching and dancing in heels.

At the encouragement of dance-world friends, Abdiel began exploring a range of club dances — house, vogue, waacking. But they had a love-at-first-dance moment with hustle. In the diverse crowd at their inaugural hustle party, Abdiel saw “a visual representation of the fullness of me,” they said. In stark contrast to the ballroom world, here they could wear their heels, and follow as well as lead, without anyone blinking.

Abdiel became immersed in hustle culture. They also began discussing its history with the form’s older veterans, some of whom still regularly came out to dance.

Hustle’s expansive vision of the dance floor reflects the moment of its birth, in the early ’70s. Civil rights, gay rights and women’s rights were opening up American culture, even as the Vietnam War was ripping it in two.

People were looking for an escape and also feeling newly empowered to express themselves. At the New York City clubs where hustle developed, they found space for that expression. “There was no separation between Black, white, gay, straight, rich, poor,” the celebrated hustle dancer Maria Torres told Abdiel in an interview on Instagram.

Though other social dances have a history of same-sex partnering, hustle’s is deeper and broader. Its acceptance of women as leaders in a partnering — Torres became well-known for her expert leading of both men and women — is especially unusual. Hustle’s expansive, space-eating positions, with the arms fully extended through the elbows, are also a rarity in social dance.

As Abdiel embraced the liberation of hustle, the hustle crowd embraced Abdiel. Mutual friends from the scene played matchmaker between Abdiel and Kristine Bendul, 49, a longtime hustle dancer with an extensive Broadway and ballet résumé. The pair’s wide array of dance experiences allowed them to “have this magical playtime” on the floor, Bendul said, blending hustle with modern dance, jazz and ballroom.

Abdiel and Bendul began performing together, choreographing routines in which they both wore heels and swapped the lead back and forth. In 2019, they brought hustle’s gender-neutral approach to the highly gendered world of competitive ballroom dance, where pairs have historically been required to include a male leader and a female follower. Just a few months after the National Dance Council of America redefined a partnership as “a leader and a follower without regard to the sex or gender of the dancer,” Abdiel and Bendul competed as ballroom’s first professional gender-neutral couple, fluidly switching between leading and following several times during each dance.

“I think we came in third to last,” Abdiel said, laughing. “The prize was that people saw it happen.” A documentary about the pair’s competitive ballroom experience, “FollowLeadLOVE,” is now in production.

Abdiel and Bendul had plans to attend other ballroom events. But in February 2020, Abdiel’s father died, and a month later the pandemic wiped their dance calendar clean. Feeling lost, Abdiel came back to social dance.

“I was remembering dancing at home with my family, and how much I loved the feeling of dancing in community,” they said. “That’s a big thing that I missed in my stage career.”

The Dance Is Life series grew out of that need for communal celebration. Early in the pandemic, when clubs were still shuttered, Abdiel and the DJ Natasha Diggs hosted a virtual dance party that pulled together hustle dancers from around the world. In spring 2021, they brought that party offline with their first event at the Bethesda Fountain.

They chose the fountain not only because of its convenience — centrally located and outdoors, so Covid-friendly — but also because of its significance to hustle history. “The fountain, that was the place to be during the summertime in ’75, ’76, ’77,” said Willie Estrada, 65, a hustle pioneer and the author of the book “The Dancing Gangsters of the South Bronx.” “We’d dance all night on Saturdays, get breakfast in the mornings, walk to the fountain, and dance there all day.”

The easygoing Dance Is Life parties echo the freewheeling spirit of hustle’s early days. “For the first one, we didn’t even have a table for me to put my DJ stuff on, so the pretzel guy gave us a box,” Diggs said. “Totally do-it-yourself. But we felt the importance of this moment, after being so isolated, to share the joy of partner dancing.”

Teaching has become an especially important part of Abdiel’s hustle evangelism. Before the pandemic, they and Bendul led gender-neutral hustle classes at Gibney and Juilliard, showing students how to both lead and follow. As a lecturer at the University of Washington, where they are pursuing a master’s degree in dance, Abdiel has developed a lab that transforms a dance studio into an approximation of a club — a live DJ, a disco ball, a ceiling covered in balloons (like the DJ David Mancuso’s famous 1970s parties at the Loft). The goal is to reflect the way hustle was learned initially: through observation and improvisation on the dance floor. “It’s all about evoking a sense of play,” Abdiel said.

With the Do The Hustle project, Abdiel is also bringing hustle into the concert realm, without losing sight of its roots. During a series of residencies — with in-progress showings scheduled at Jacob’s Pillow and as part of the Guggenheim’s Works & Process program — Abdiel is developing an event in three parts: an immersive stage performance, including an examination of hustle’s history; a dance class; and a big dance party.

But the heart of their work will always be the social dance floor — which is also where you’re most likely to run into them. The next Dance Is Life party in Central Park is scheduled for July 11. If you come, Abdiel won’t let you leave without a dance.

“That kind of communal healing and celebration, that’s at the core of everything I do,” they said. “I want to continue doing that until I die.”