A town in Ukraine’s east finds itself squarely in the path of Russia’s advance. 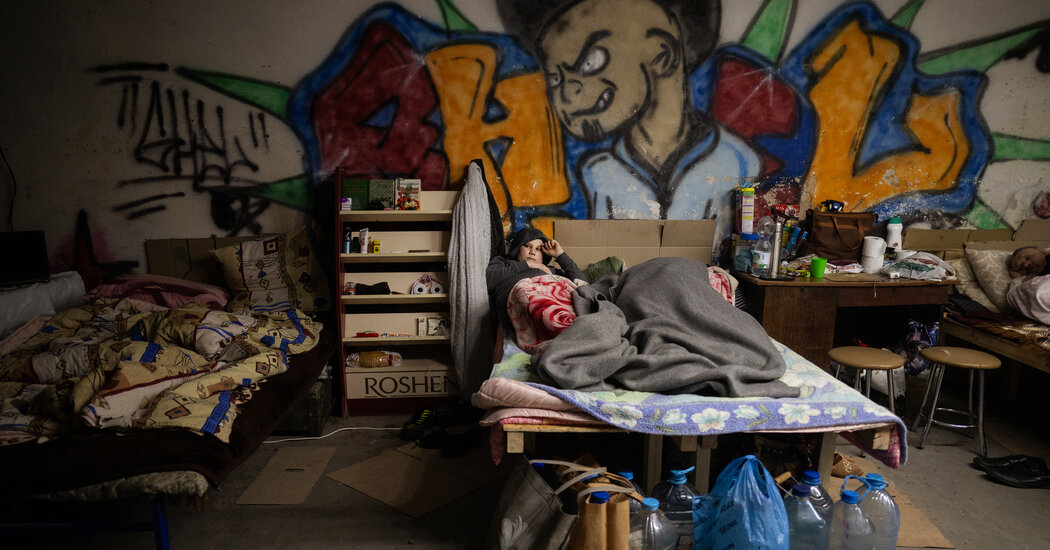 Wimbledon officials on Wednesday said they would bar Russian and Belarusian players from entering this year’s tournament because of Russia’s invasion of Ukraine and Belarus’s support of the war.

Wimbledon became the first Grand Slam tennis event to restrict individual Russian and Belarusian athletes from competing. In a statement, Wimbledon officials confirmed that other tennis tournaments to be held this year in the United Kingdom planned to take the same approach.

“Given the profile of The Championships in the United Kingdom and around the world, it is our responsibility to play our part in the widespread efforts of government, industry, sporting and creative institutions to limit Russia’s global influence through the strongest means possible,” the statement read.

“In the circumstances of such unjustified and unprecedented military aggression, it would be unacceptable for the Russian regime to derive any benefits from the involvement of Russian or Belarusian players with The Championships.”

Wimbledon, one of the four Grand Slam tournaments, is scheduled to begin in late June. The tournament, in its statement, left open the possibility of revising its position, stating that “if circumstances change materially between now and June, we will consider and respond accordingly.”

Statement regarding Russian and Belarusian individuals at The Championships 2022.

The decision would block some highly ranked players. Four Russian men are ranked in the top 30 on the ATP Tour, including No. 2 Daniil Medvedev, who is the reigning U.S. Open men’s singles champion, although he is recovering from a hernia operation. Russia has five women in the top 40 of the WTA Tour rankings, led by No. 15 Anastasia Pavlyuchenkova. Aryna Sabalenka of Belarus is ranked No. 4 and was a Wimbledon semifinalist last year. Her compatriot Victoria Azarenka, a former No. 1, is ranked No. 18.

The ATP Tour expressed strong opposition to Wimbledon’s ban, terming it “unfair” and saying that it “has the potential to set a damaging precedent for the game.”

“Our sport is proud to operate on the fundamental principles of merit and fairness, where players compete as individuals to earn their place in tournaments based on the ATP rankings,” the ATP statement said. “Discrimination based on nationality also constitutes a violation of our agreement with Wimbledon that states that player entry is based solely on ATP rankings. Any course of action in response to this decision will now be assessed in consultation with our board and member councils.”

After the invasion began in February, professional tennis organizers were quick to bar the Russians and their Belarusian allies from team events like the Davis Cup and the Billie Jean King Cup, both of which were won by Russian teams in 2021. The sport’s seven governing bodies announced that ban collectively on March 1.

But Russian and Belarusian players have been permitted to continue competing on the professional tours as individuals albeit without any national identification. There are no longer flags or countries listed next to their names on scoreboards, in draws or in the published computer rankings.

But there have been calls for a full ban from several former and current Ukrainian players, including the rising women’s star Marta Kostyuk and the former player Olga Savchuk, the captain of Ukraine’s Billie Jean King Cup team, which competed against the United States in Asheville, N.C., last week.

“I think it’s just a matter of time,” Savchuk said in an interview. “It’s not me who’s making the decision, but I think they should also be banned from playing as individuals. It cannot just be a sanction against 90 percent of the Russian people and 10 percent not.”

“It has to be even,” Savchuk added. “And I think it’s collective guilt.”

But while some other international sports, including track and field and figure skating, have barred individual Russian and Belarusian athletes from some competitions, professional tennis had adopted a more conservative approach.

Alexandr Dolgopolov, a Ukrainian former tennis star who is now part of the Ukrainian military, expressed support for Wimbledon’s decision. “Yes, Russians are accountable for actions of their country, army and the leaders they choose for 20 years,” Dolgopolov said in a Twitter post.

Dmitry Peskov, the Kremlin press secretary, expressed dismay with the ban. “Our players are among the top in the world ranking and so the tournaments will suffer from their suspension,” Peskov told reporters during a regular briefing. “Once again, it is unacceptable to make athletes hostages of political prejudice, intrigue and hostile actions toward our country. We can only regret that. I would only wish that the guys would do everything to ensure they stay in shape.”

Officials with the men’s and women’s tours have argued that the Russian and Belarusian players should not be blamed for the invasion or their countries’ policies and pointed out that several leading players, including the Russian stars Andrey Rublev, ranked No. 8 in men’s singles, and Pavlyuchenkova, have spoken out against the war.

“I feel very strongly that again these individual athletes should not be the ones that are being penalized by the decisions of an authoritarian leadership that is obviously doing terrible, reprehensible things,” Steve Simon, the head of the WTA, said in an interview with the BBC last month. “But if that happens, which is again part of the overall strategy of making Russia and Russian citizens pay the consequence for the decision their government has made, then it won’t be something that we support.”

Ian Hewitt, chairman of the All England Club, said in Wimbledon’s statement: “We recognize that this is hard on the individuals affected, and it is with sadness that they will suffer for the actions of the leaders of the Russian regime.”

Wimbledon, the oldest Grand Slam tournament, is likely to be an outlier on this issue. The French Open, which begins next month and is the next Grand Slam event on the calendar, has not indicated that it intends to bar individual players. Nor has the U.S. Open, which will be held in New York in late August and early September. For now, regular tour events — like this week’s events in Barcelona, Spain; Belgrade, Serbia; Istanbul; and Stuttgart, Germany — are proceeding with Russians and Belarusians in their draws.

But Wimbledon, which begins June 27 in London, has come under considerable pressure from the British government, led by Prime Minister Boris Johnson, to take a stronger stance. Nigel Huddleston, the British sports minister, told a parliamentary hearing last month that Russian players like Medvedev might need to provide “assurances” that they do not support President Vladimir V. Putin in order to play at Wimbledon.

But the tournament, arguably still the most prestigious in the sport, has apparently decided against requiring players to denounce their governments out of concern that this could put them or their families in a precarious situation. A ban, though not part of Wimbledon officials’ initial thinking, would prevent players from having to make such a choice.

Wimbledon has not barred individual athletes from specific countries since the aftermath of World War II when players from Germany, Japan and other nations were not permitted to play in the tournament.