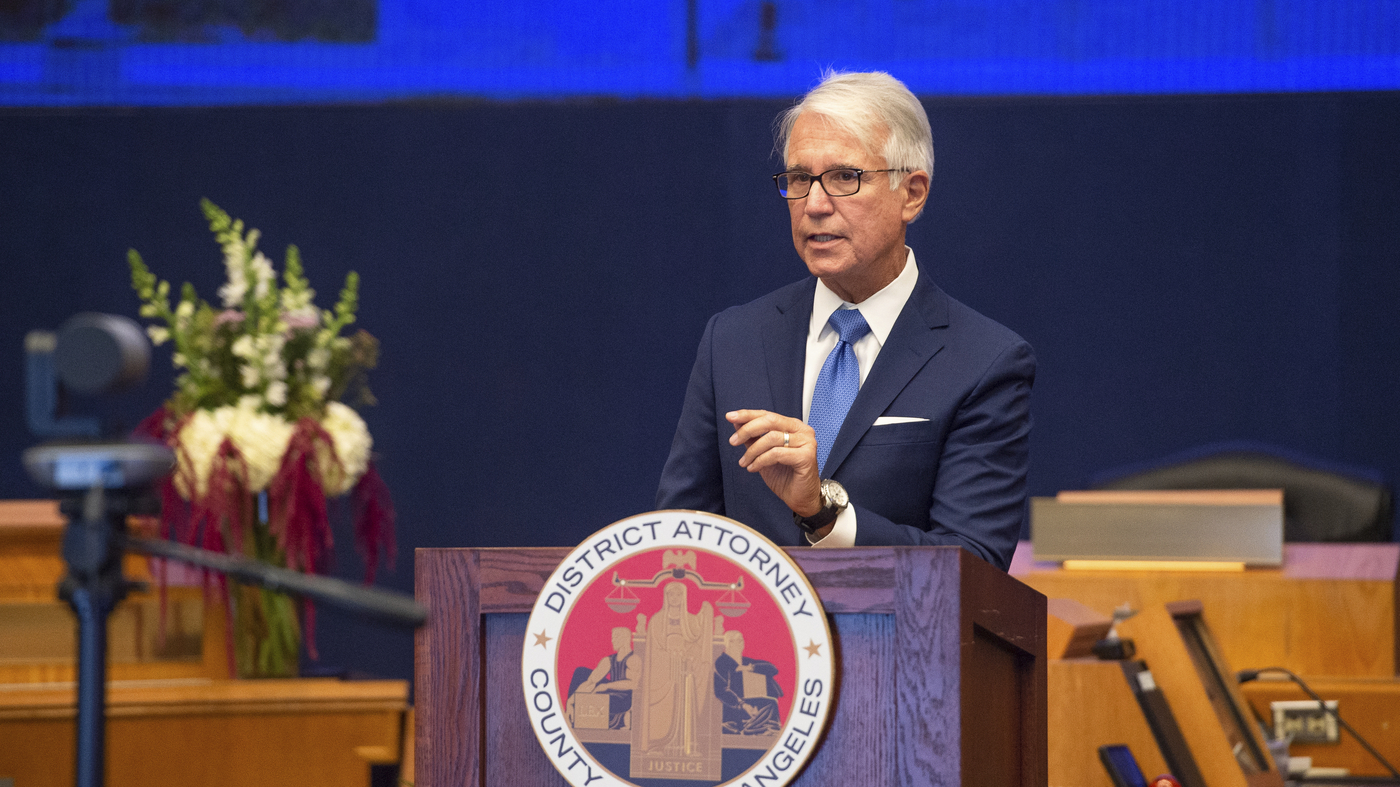 Los Angeles County District Attorney George Gascón, seen here in 2020, said his office had aided in the arrest of the CEO of a Michigan-based election software company on “suspicion of theft of personal identifying information.”

Los Angeles County District Attorney George Gascón, seen here in 2020, said his office had aided in the arrest of the CEO of a Michigan-based election software company on “suspicion of theft of personal identifying information.”

The Los Angeles County District Attorney announced on Tuesday the arrest of Eugene Yu, the CEO of a small company that makes software for scheduling poll workers and had a contract with L.A. County. District Attorney George Gascón said at a news conference that the contract with the county required the company, Konnech, to securely maintain election worker information on servers in the United States.

Gascón said that in the course of a separate investigation, his office “found probable cause to believe that Konnech allegedly violated this contract by storing critical information that the workers provided on servers in China.”

The District Attorney did not provide further details of what evidence his investigators had uncovered so far. He said Yu’s arrest was made on “suspicion of theft of personal identifying information.”

Konnech is located in Michigan, and Gascón said his office had cooperated with local law enforcement to make the arrest. Robert Arcos, the chief of the D.A.’s Bureau of Investigation, said that investigators from the Public Integrity Unit and the Computer Forensics Unit helped serve the arrest warrant on Yu, and also seized hard drives.

“We intend to hold all those responsible for this breach accountable,” said Gascón, who added that his office is seeking the extradition of Yu from Michigan to California.

NPR obtained court documents filed against Yu in Ingham County, Michigan, which indicate that Yu is “charged in Los Angeles County, California with the extraditable crime of Embezzlement of Public Funds.” The documents state Michigan authorities charged Yu with “misdemeanor fugitive from justice,” and he has another court date on Oct. 25. NPR also sought court documents from the L.A. County D.A.’s office, but a spokesperson said in an email, “Because this is an ongoing investigation we will not be releasing any documents at this time.”

Gascón, a Democrat, said at the news conference that the information allegedly held on servers in China related to poll workers, and “is not – I repeat, it is not – related to election material or voter information.”

In a statement, a spokesperson for Konnech said, “We are continuing to ascertain the details of what we believe to be Mr. Yu’s wrongful detention by L.A. County authorities.”

“Any L.A. County poll worker data that Konnech may have possessed was provided to it by L.A. County, and therefore could not have been ‘stolen’ as suggested,” said the spokesperson, Jon Goldberg.

Last month, Konnech claimed Yu and the company were the target of a “smear campaign” led by “conspiracy theorists,” who accused Konnech of holding data in China. The company said the allegations contributed to death threats against the CEO and hurt business prospects for a small company with just over 30 clients in North America.

The company added a “2022 Election Mis-information Advisory” to their website, which stated, “Konnech has never stored customer data on servers in China.” Goldberg reiterated that claim in comments to NPR and other news outlets.

As of Tuesday, however, that statement was no longer visible on the company’s homepage. The link to the “Advisory” appeared to be broken. NPR asked Goldberg about the apparent change to the website, but he did not respond.

The company also filed a lawsuit against the controversial nonprofit True the Vote, which said it had seen evidence of Konnech data on servers in China and suggested Konnech was part of “a red Chinese communist op run against the United States.”

True the Vote executive produced the election denial film “2,000 Mules,” which has been widely debunked by fact-checkers and critics from across the political spectrum, including former U.S. Attorney General Bill Barr.

In the lawsuit, Konnech again contended that the company “does not, and has never, stored any actual customer or poll worker data on any server in China,” and convinced a federal judge to issue a temporary restraining order against True the Vote. That order blocked True the Vote from “using, disclosing, or exploiting the property and data downloaded from Konnech’s protected computers.” Konnech later asked a judge to consider holding True the Vote in contempt for allegedly violating the order.

True the Vote denied all wrongdoing in the defamation case. On the day the lawsuit was filed, True the Vote’s founder, Catherine Engelbrecht, said “everything we have ever said about any of this is true.”

In any event, the L.A. County D.A. did not reference the FBI or other federal law enforcement when announcing Yu’s arrest.

In a statement, True the Vote said that the group was “honored to have played a small role in what must have been a wide ranging and complex investigation. The organization is profoundly grateful to the Los Angeles District Attorney’s office for their thorough work and rapid action in this matter.”

Goldberg, meanwhile, said that Konnech “stands by its detailed filings with the Federal Court regarding True the Vote’s repeated acknowledgements of their unlawful conduct toward Konnech.”