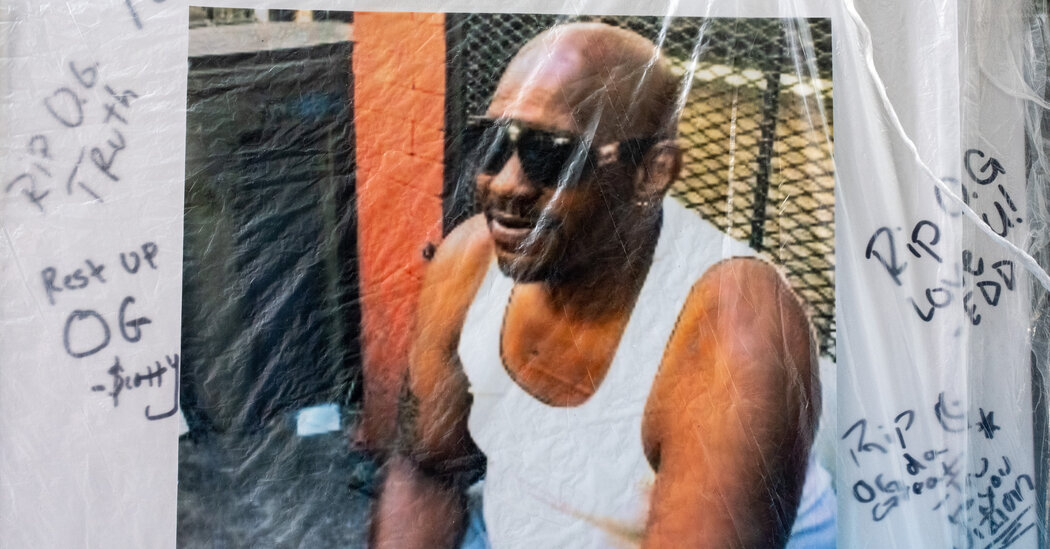 For years, John Edwards held court from a plastic blue chair outside his basement home on Prospect Avenue in the Belmont section of the Bronx. He kept the sidewalk tidy, talked young people through their troubles, picked up scrap metal and helped neighbors with odd jobs.

On Thursday morning, a FedEx deliveryman arrived looking for Mr. Edwards, who would sometimes hold packages for safekeeping, and found the blue plastic chair surrounded by candles and flowers. He asked someone what had happened, and was told that Mr. Edwards, a 62-year-old grandfather known as OG, had been the random victim of a drive-by shooting late on July 4.

“It happened when the fireworks was exploding,” Cesar Lebron, a neighbor and close friend, said in an interview this week. He described holding Mr. Edwards that night as he died. “I noticed he stumbled and then everybody ran. He stumbled to the floor and I grabbed him. He had a red dot on his stomach. Everybody told me to run and to cover up, but I didn’t want to leave him.”

Eddie Vera, another neighbor of Mr. Edwards’s, choked up as he spoke about his friend.

“He lives there,” Mr. Vera said. “What is the crime of sitting in front of your own house?”

Crime and violence were at historic lows in New York before the coronavirus arrived in 2020. And while shootings and murders spiked as the pandemic continued, they have begun to recede — although not to their prepandemic levels. Anxiety remains high: In a Spectrum News NY1/Siena College poll of city residents last month, 76 percent said they were “somewhat or very concerned that they’ll be the victim of a violent crime.”

In areas where crime is concentrated, random killings make the concern concrete and drive home a sense of loss and instability, a feeling that things are fraying fast. In the Bronx, which has been hit hard by Covid-19 and where many residents struggle to pay the bills, Mr. Edwards’s neighbors said his death only deepened a sense of hopelessness and frustration.

Mr. Edwards’s block is near where a 13-year-old boy, Jaryan Elliot, was fatally shot outside a cafe on East 187th Street last summer. Two police officers were shot and wounded in November another block over.

The shooting that claimed Mr. Edwards’s life happened about 10:30 p.m. last Monday, when a gunman in a silver Toyota Highlander opened fire through the vehicle’s rear passenger window, police officials said at a news briefing on Thursday.

Mr. Edwards was declared dead at St. Barnabas, but Mr. Lebron thinks he was gone before that. “I believe he died in my arms,” he said.

In the 48th Precinct — which encompasses Belmont — there had been nine murders so far this year compared with seven at the same point last year: As of July 3, it was tied for the third-highest number of murders among all precincts in the city. Overall, in 2021, there were 13 murders in the precinct, compared with 137 in 1990, the data shows.

Even if the number of murders is low by historical standards — and far better than in many U.S. cities — each one tears at the fabric of community and family.

“He will give his last to help anybody,” Mr. Edwards’s son, John Dixon, said. “He would do it, he wouldn’t even tell nobody.”

Mr. Dixon, 40, said that he and his father, a grandfather of three, talked once or twice a week, and that their last conversation had been a “spiritual” one.

“He was telling me he was proud of me,” Mr. Dixon said.

On Thursday, near the scene of the killing, neighbors stopped to embrace Mr. Lebron and offer their condolences about the death of his friend. Mr. Lebron recalled fondly how they had organized a car wash last year. On July 4, he said, they had spent the day having a “good time” exploring the Bronx and Washington Heights before returning to Belmont.

Mr. Edwards’s beloved 2-year-old dog, Roxanne, looked on from the stairs of his building as a small group swapped stories about the man they called the “dad of the block,” like the time he argued with Roxanne over a hot dog. (A neighbor has taken the dog in.)

Mr. Edwards’s plastic blue seat was bedecked with flowers and balloons. The sidewalk was crowded with tribute candles and bottles of Guinness, his favorite drink. Propped against the chair were white poster boards covered with pictures of Mr. Edwards and a handwritten tribute: “Sleep in Peace OG.”