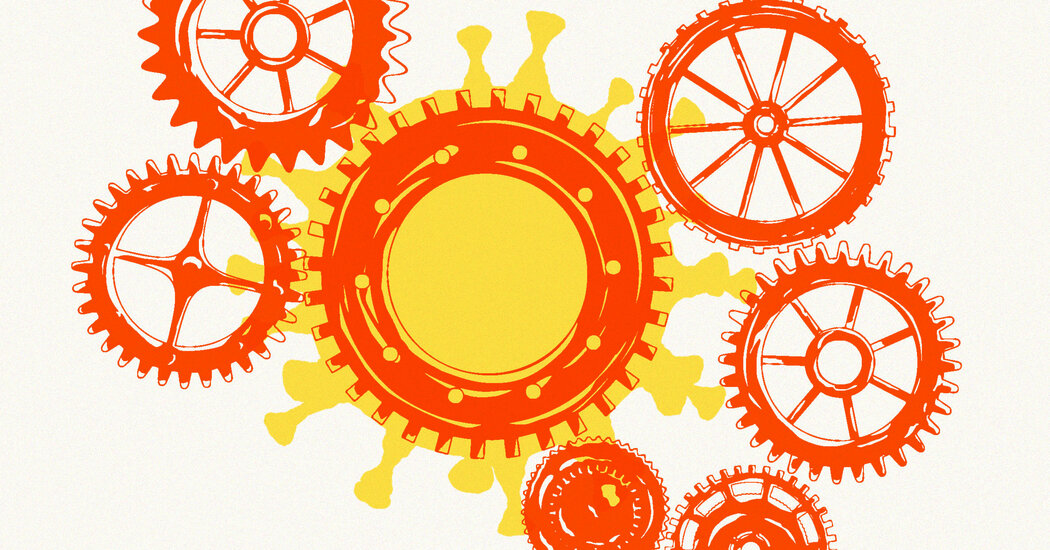 The U.S. economy is continuing to create a lot of jobs, but the growing work force isn’t producing a bigger gross domestic product. It’s worrisome, so what exactly is going on?

First, the good news: In June, the number of people on nonfarm payrolls in the United States increased by 372,000, more than expected. More jobs, more income — that’s positive. Many economists took the Bureau of Labor Statistics report as evidence that the economy is nowhere near tipping into a recession. “An American economy in free fall does not tend to produce 372,000 jobs in any given month,” Joe Brusuelas, the chief economist of the accounting firm RSM, wrote in a note to clients.

What’s not so good is that the economy seems to require so many more workers at a time when its output is actually shrinking. Output of goods and services fell at an annual rate of 1.6 percent in the first quarter of 2022, and it probably fell at a 1.2 percent rate in the just-ended second quarter, according to the G.D.P. tracker of the Federal Reserve Bank of Atlanta.

More people producing less is not a good look, no matter how you squint. Labor productivity — that’s output per hour of work — shrank at an annual rate of 7.3 percent in the first quarter in the nonfarm business sector. Given what we know about jobs and output, productivity probably shrank again, though less, in the second quarter.

Remember all those stories from 2020 about how corporate America responded to the Covid-19 pandemic by accelerating the deployment of new information technologies, compressing years of advances into months?

It’s possible those bullish reports were overstated. It’s also possible that the vaunted productivity improvements were real but have not continued. If output per hour steps up to a higher level and then stays at that new level, it appears in the data as zero productivity growth.

Labor productivity as officially measured did take an enormous leap at the start of the Covid pandemic. It grew at annual rates of 10.3 percent in the second quarter of 2020 and 6.2 percent in the third quarter of that year, sharply higher than the post-World War II average of 2.1 percent. Those figures stoked the “digital transformation” narrative.

It’s clear now, though, that most of the increase was from a change in the mix of workers. Huge layoffs in leisure, hospitality and other low-wage sectors early in the pandemic skewed the labor force toward workers who earn higher wages and tend to have higher labor productivity (at least as conventionally measured).

The temporary skew in the average skill level of jobs accounted for 71 percent of labor productivity growth in the second quarter of 2020, according to research by Jay Stewart, a senior research economist for the Bureau of Labor Statistics.

Now that all those low-wage workers are coming back, it makes sense that productivity growth would slow down or turn negative.

Strong demand for workers “has forced us to bring less productive workers that in normal circumstances would not be active or employed,” Diego Comin, a Dartmouth College economist who studies productivity, wrote in an email. “My 15-year-old, who is all but productive, keeps getting job offers in the service sector that seem appealing even to me.”

But employment won’t remain strong for long if employers sense that the strength of demand for their goods or services doesn’t justify all the hiring they’ve been doing. Some of the hiring reflected in the strong June jobs numbers is the result of decisions made months earlier, when economic prospects were brighter, Frank Steemers, a senior economist for the Conference Board, a business-supported research group, told me.

Winning companies will respond to the slump by investing more in automation, while ambitious workers will switch to employers “who can afford to pay more but who will also require them to be more productive,” Bart van Ark, managing director of the Productivity Institute at the University of Manchester in the U.K., wrote in an email.

In any case, it’s a mistake to view strong employment gains as a bullish sign for growth. The Conference Board classifies jobs as a “coincident” indicator, meaning that if you see employment falling, it’s too late to stave off a recession — the retreat has probably already begun.

To gauge the strength of the economy, pay attention to the output (goods and services), not just the input (jobs). When output is weak while input is strong, it means businesses’ costs are rising and profits are getting squeezed, which tends to lead to layoffs. Profits have been extremely high lately, providing a cushion. But productivity is on track for one of its worst 12-month performances in records going back to 1947. Look out below.

Number of the Week

The median estimate of inflation in the United States in June as measured by the change in the Consumer Price Index from a year earlier, according to a survey of economists by FactSet. Excluding food and energy, whose prices are volatile, the economists estimate prices rose 5.7 percent over the 12 months. The Bureau of Labor Statistics is set to release the official data on Wednesday.

Quote of the Day

“Money is like muck, not good except it be spread.”

We want to hear from you.
Tell us about your experience with this newsletter by answering this short survey.