A Minnesota Candidate Went Into Labor During Her Convention Speech 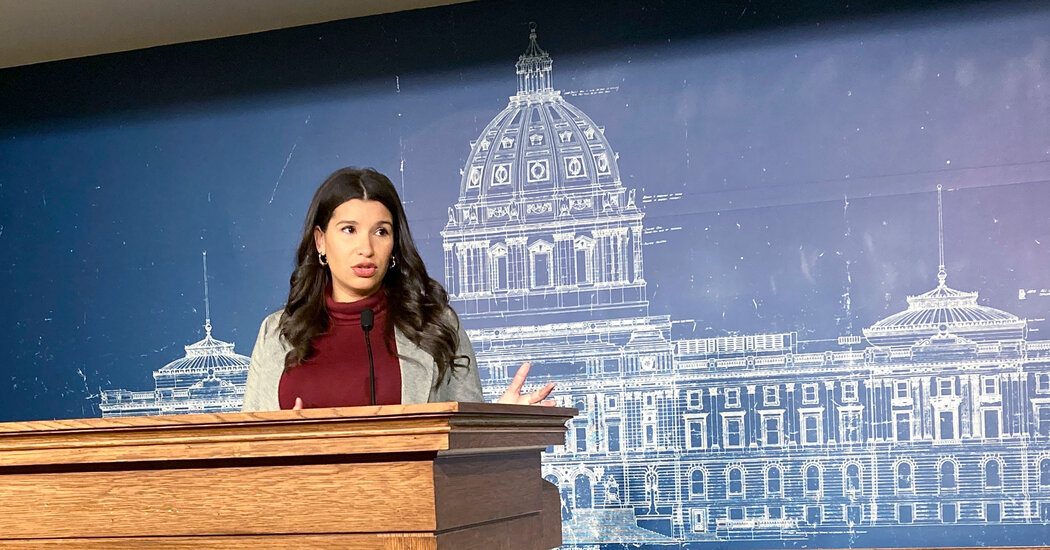 The pause, three minutes into a candidate’s speech about the toll of climate change, the pandemic and the murder of George Floyd, was not just for rhetorical effect.

Erin Maye Quade had been making her case for why she should receive her party’s endorsement to represent the Minneapolis suburbs in the State Senate when she started having contractions.

“Excuse me,” said Ms. Maye Quade, grimacing as she put her hand on her belly. She had opened her speech with the disclosure: “So they broke the news that I’m in labor, yeah?”

Ms. Maye Quade completed her convention floor speech and a question-and-answer session that followed. She was trailing after the first round of voting and she withdrew from the proceedings to seek medical care. The convention, held by the Minnesota Democratic-Farmer-Labor Party on April 23 in Rosemount, Minn., carried on without Ms. Maye Quade, 36, a former state representative.

The party’s treatment of Ms. Maye Quade, who gave birth to a girl about 10 days before her scheduled due date, drew intense criticism as several videos of Ms. Maye Quade’s speech ricocheted across the internet.

Those seeking to empower female candidates faulted party officials and Ms. Maye Quade’s male opponent, Justin Emmerich, for not suspending the proceedings — a move that Mr. Emmerich told The Star Tribune he would have supported.

He declined a request for comment on Friday, and Ms. Maye Quade wasn’t available for an interview. Reached briefly by phone, she said she had just returned home from the hospital.

Emma McBride, a political director of Women Winning, a Minnesota campaign organization that endorsed Ms. Maye Quade, said in an interview on Friday that she was troubled by the scene.

“While we were in awe of her strength, it was horrifying to watch a woman go through this vulnerable experience while nobody with the power to do so stepped in to put an end to it,” Ms. McBride said.

Ms. Maye Quade, who had been seeking to become the first Black woman and first openly gay woman elected to the State Senate in Minnesota, hasn’t said whether she will run in a primary against Mr. Emmerich in August. The candidates who receive their party’s endorsement during the convention in the spring — marathon proceedings decided by party stalwarts — typically gain an upper hand for the primaries, when nominations are at stake. There is no requirement for candidates to be present while voting takes place on an endorsement, according to the Minnesota Democratic-Farmer-Labor Party.

The party referred questions on the matter on Friday to local convention officials, who said in a statement that they put the endorsement session for Senate earlier on the schedule at Ms. Maye Quade’s request.

“For reasons of fairness, our convention chairs cannot unilaterally close or delay the endorsement process,” the statement said. “If a delegate had wanted to postpone the endorsement, they could have made a motion for postponement, which the convention would have then voted on. No such motion was made.”

Created in the 1940s when the Minnesota Democrats merged with the Farmer-Labor Party, the party said it was “committed to ensuring as many people as possible can participate in our convention and endorsement process.”

At the end of Ms. Maye Quade’s eight-minute speech, it took another 20 minutes to get through a question-and-answer session and an additional 30 minutes to finish the first round of voting, Ms. McBride said. When it became clear that Mr. Emmerich was leading but had not reached the 60 percent threshold required to clinch the party’s endorsement, Ms. McBride said, Ms. Maye Quade asked to suspend the proceedings and move to a primary.

“Erin was expected to grin and bear it, as Black women are so often expected to do in the face of injustice,” Ms. McBride said, adding: “That sends a direct message to women and particularly women of color of where they fall on the priority list.”