A crocodile blocked a Navy airfield in Key West. The military needed to call for help 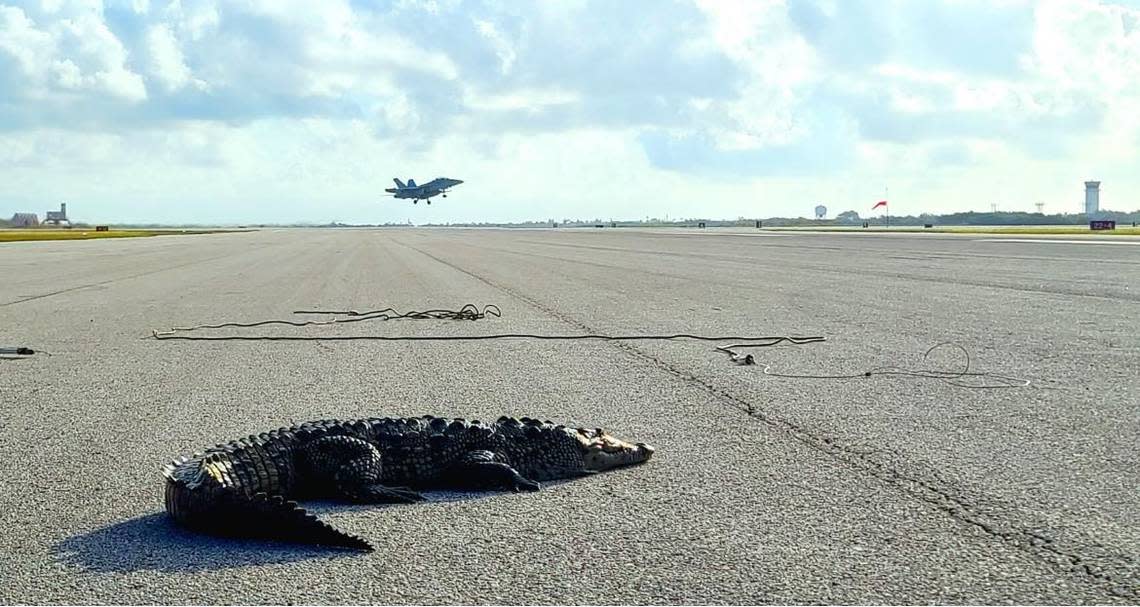 In South Florida, surprise visitors can crawl on their bellies.

And wear out their welcome.

Naval Air Station Key West had to remove a stubborn crocodile from its airfield on Boca Chica Key recently. The croc was photographed basking in the spring sunshine with a Super Hornet fighter jet in the background.

“This airfield resident was soaking up some sun on one of our runways recently and didn’t want to budge,” NAS wrote in a Facebook post Monday.

Navy officials knew what to do, of course. The air station, at mile marker 8. off the Overseas Highway, is located within the Florida Keys National Marine Sanctuary.

NAS wildlife biologist Rosa Gonzales, who snapped the croc’s photo, called in reinforcements from the Florida Fish and Wildlife Conservation Commission to move the reptile beyond the fence line.

“After a while, crocodile!” NAS posted.

‘Oh, it’s pretty big.’ Check out a crocodile that went for a swim at a Miami-area park

People were taken by the site of the croc. Some were familiar with such visits.

“The neighborhoods right outside of the fence line, in Geiger Key, have been having multiple croc issues the past few months,” according to one commenter.

Another posted a photo of himself with a croc at the air base from his Navy days before 2012, he said.

NAS Key West property is home to 23 federally listed species, NAS added. They include the endangered Lower Keys rabbit, the smallest of three subspecies of marsh rabbits. They can grow up to 14 to 16 inches long.

The air base and the wildlife agency haven’t commented yet on the size of the croc on the airfield.

This story will be updated