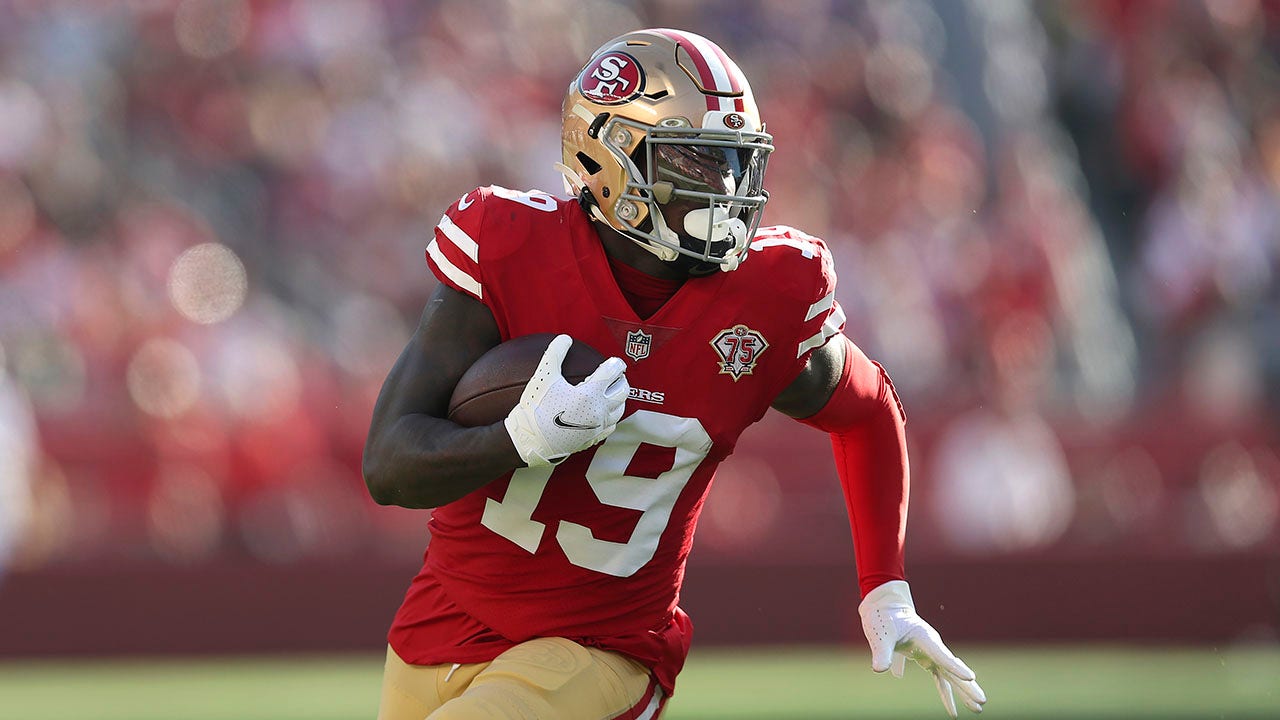 While Deebo Samuel’s future in San Francisco appears to be in question, the 49ers are making it clear they wish to keep their star wide receiver.

On Monday, 49ers general manager John Lynch was pelted with questions regarding Samuel, an electric dual-threat player who reportedly requested a trade from the team last week without explaining his reasons.

Lynch, speaking at a pre-draft news conference, said he couldn’t imagine a scenario where the team trades Samuel, and he remained confident that both sides could figure out a long-term contract.

San Francisco 49ers wide receiver Deebo Samuel (19) runs for a touchdown against the Minnesota Vikings during the first half of an NFL football game in Santa Clara, Calif., Sunday, Nov. 28, 2021.
(AP Photo/Jed Jacobsohn)

“I can’t ever imagine wanting to move on from Deebo,” Lynch said. “You put yourself through the exercises of, even though we don’t have a first-round pick, you have to be thorough in this process and prepare for everything.”

“So, you go through it and do that. He’s just too good of a player,” he added. “We’ve got nothing but love for him and nothing but appreciation for what he’s brought, but you just don’t let guys like that walk, so I can’t envision a scenario where we would.”

Lynch didn’t provide much information on contract negotiations or why Samuel requested a trade, which the general manager acknowledged during the news conference.

San Francisco 49ers General Manager John Lynch looks on during pregame before the game against the Tennessee Titans at Nissan Stadium on December 23, 2021, in Nashville, Tennessee.
(Wesley Hitt/Getty Images)

However, Lynch noted that the 49ers and Samuel have been in contact in recent weeks and said the situation won’t impact their draft approach. The team doesn’t have a first-round pick after they moved up to select quarterback Trey Lance last year.

The wide receiver market has exploded this offseason, with Tyreek Hill, Davante Adams, Stefon Diggs, and Christian Kirk all receiving massive deals. Samuel is entering the final year of the rookie deal and is set to earn a base salary of just under $4 million in 2022.

Samuel has excelled as both a running back and a receiver in Kyle Shanahan’s offense after the team drafted him in the second round in 2019.

An All-Pro player last season, Samuel totaled 1,770 yards from scrimmage and rushed for eight touchdowns with the 49ers. He also led the league with 18.2 yards per catch, earned 1,405 receiving yards, and scored a combined 14 touchdowns.

“I think he’s the perfect illustration [former NFL coach] Herm Edwards used to talk about, when will meets skill you’ve got the opportunity to be special,” Lynch said. “I think Deebo probably embodies that as much as anyone … he’s got tremendous will. He’s [a] very talented player. I think by virtue of the way he plays, it’s inspiring.”

San Francisco has given many of its drafted players big contracts in previous offseasons, including tight end George Kittle and linebacker Fred Warner. However, those deals typically took until the summer to get done.

“I don’t think there’s trouble getting an extension,” Lynch said. “I wouldn’t read into that. Our track record is pretty good. We’ve never had a significant holdout and our record speaks to that, and we don’t plan on one moving forward. … When you play well here, you’re rewarded, for the most part. We’re proud of that. Our actions have reflected that over time.”