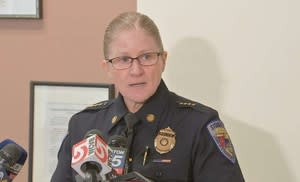 Three Stoughton police officers who have since resigned from their roles with the department engaged in inappropriate relationships with a teenage girl who died by suicide years later, the town’s top cop said Friday.

McNamarra said all of the officers formed relationships with and exploited Sandra Birchmore, a 13-year-old who was enrolled in the Stoughton Police Explorers program in 2010.

Birchmore, 23, was found dead in her apartment in Canton on Feb. 4, 2021, and she was was failed by, abused, and manipulated by the officers, according to McNamarra.

“Ms. Birchmore was a vulnerable person who had one constant in her life since childhood with unwavering appreciation of police officers…People with oaths and duties to protect and serve.” McNamarra said. “The admiration led her to form relationships with men who were willing to take advantage of her.”

Up until her death, Birchmore had been speaking of her relationship with Matthew Farwell. The day after Birchmore’s death, McNamarra ordered Deputy Chief Brian Holmes to head up an investigation to determine if any misconduct was committed by members of her department.

“The subsequent inquiries into her life and death revealed a deeply disturbing pattern of behavior toward her,” McNamarra said.

The Farwell brothers, as well as Devine, violated many department policies, including being untruthful and failing in attention and devotion to duty, according to McNamarra.

Evidence uncovered during the investigation showed Matthew Farwell, who was 27 at the time, met Birchmore while she was in the explorers program and began a relationship with her that included a slew of digital messages and explicit exchanges over the course of several years, McNamarra said.

William Farwell is also accused of exchanging explicit messages and photographs with Birchmore while on duty, in addition to having a number of unbecoming physical encounters with her.

McNamarra said William Farwell also attempted to introduce Birchmore to other men on multiple occasions, including former Deputy Chief Devine who had been demoted to patrol officer for abusing power, and an “individual who is a police officer in another jurisdiction.”

Devine also worked as a detail officer at an afterschool program years earlier and had inappropriate contact with another student, according to McNamarra. He then began overseeing the explorers program, which taught aspects of policing to youth participants.

The Farwell brothers were both youth participants in the program under Devine before becoming instructors years later, putting them on a course to meet Birchmore, McNamarra said. That program has since been disbanded.

Investigators ultimately determined that Matthew Farwell ended his relationship with Birchmore on Feb. 1, 2021, after a “nasty, nasty argument.” She was found dead days later.

“All three men, the Farwell brothers and Devine, violated their oaths of office and should never have the privilege of serving any community as a police officer,” McNamarra said. “Through a sustained and deliberate combination of lies, deceit, and treachery, they violated the policies of the Stoughton Police Department.”

The Farwell brothers and Devine have since resigned and the findings of the investigation have been shared with another town that employs the fourth individual involved in the misconduct with Birchmore.

McNamarra added that she plans to ask the state’s new Peace Officer Standards and Training Commission to decertify the Farwell brothers and Devine. She also noted that she is “heartbroken” and “incensed” by what has transpired.

The Norfolk District Attorney’s Office was informed of the findings, which were detailed in a 60-page report.

In a statement, the DA’s office said, “State Police detectives and the medical examiner found no evidence of foul play in the death of Ms. Birchmore…The investigation to date has not developed a prosecutable statutory rape case against any individual.”

This is a developing story. Check back for updates as more information becomes available.